The Orchestra of the Metropolitan Opera
Paolo Carignani 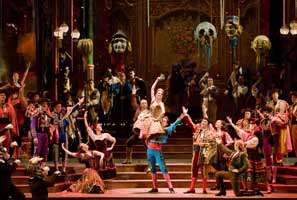 In essence, “La traviata” is a chamber opera. It works best in its most intimate moments, such as Violetta’s Act One ‘Ah fors’ è lui’ (Perhaps it is he), where she wonders if Alfredo represents true love at last. Zeffirelli’s ostentatious production, which premiered at the Met in 1998, is adequate in the party scenes of Acts One and Two where the opulent and superficial lifestyle of the non-heroic Parisian bourgeois of the 1850s was feverishly brought to life. In spite of the heavy-handedness of the production, the adept singing and acting of Anja Harteros, Massimo Giordana and Zeljko Lucic were the perfect counterbalance to this in-your-face production.

The splendid German soprano Anja Harteros (Violetta) sang and acted so convincingly that her most intimate heart-felt thoughts were readily discernible. In her Act Three aria, ‘Addio del passato’ (Farewell to bright visions), Violetta senses the approach of death, which Harteros, with her flair for perfect timing and emotional nuance, made so believable. Violetta’s Act One cabaletta ‘Sempre libera’ (Ever free) was sung with admirable abandonment and daring vocal pyrotechnics, all with remarkable results. Violetta’s 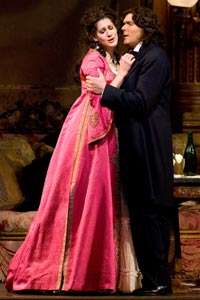 duets with Alfredo and with his father were terrific. The Act Two duet with Alfredo’s father is a tune of infinite pathos, sung in the most moving manner. Harteros’s vocal agility throughout never ceased to amaze. Her powerful coloratura was full of color, beauty, and nuance; her phrasing was impeccable.

With his good looks and ease of movement, Massimo Giordano (Alfredo) was physically convincing as Violetta’s true love. Giordano and Harteros made for a handsome couple. His supple and forceful voice was put to captivating effect numerous times. He first showed off his pleasing voice in the Act One drinking toast, ‘Libiamo né lieti calici’ (Let us drink). In a serious turn of events, in Act Two, Alfredo insults Violetta in front of all the party guests (he erroneously believes she has taken up with another). Giordano did this with such vehemence and vocal passion that the effect was truly shocking. In his touching Act Three duet with Harteros, ‘Parigi, o cara’ (Paris beloved), Giordano was magnificent. Violetta was dying, yet Giordano’s clear, declarative singing was an elixir of the affirmation of life and hope for the lovers together. His Act One ‘Un di felice, eterea’ (One day a rapture ethereal) was exquisitely sung. 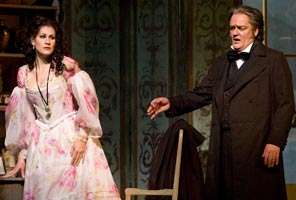 Zeljko Lucic (Giorgio Germont) brought the house down with his Act Two aria ‘Di Provenza, il mar, il suol’ (The sea and the earth of Provence), one of the most famous baritone arias in opera. He sang it with grace, dignity, and allurement, his wonderful breath control, dexterity and magnificent voice making him more than worthy of the role.

The other singers performed admirably, and the indomitable Paul Plishka (Dr Grenvil) performed his role effortlessly. The Chorus shined in the party scenes. The Act Two ‘divertissement” of men in bull heads, dancing and singing gypsies and matadors in ornate, vivid costumes was both vigorously and gracefully performed.

For such a large-scale production – every inch of the huge stage was covered in scenery – the lighting was quite subdued, thus adding to the discomfort I felt about the production, even when numerous dark-red mantles of camelias were hanging everywhere in the party scene. The production includes large staircases and floor-to-ceiling mirrors dominating in the party scenes. The gloominess and considerable size of Violetta’s bedroom in Act Three, though, did accomplish the desired effect: framing Violetta’s imminent death and her stumbling about in the vastness of her room, losing all sense of time and space.

The orchestral Prelude to Act One contains two themes: the heroine’s illness and her direct statement of love, with the impassioned cry of ‘Amami, Alfredo’. The strong chromaticism melting into lamenting appoggiaturas was deftly handled. The very lovely and quite sorrowful Prelude to Act Three was met by a spate of coughing that hardly let up. Nevertheless, Paolo Carignani conducted with aplomb, not letting the rudeness of the audience interfere. The numerous moments of lyrical introspection were convincingly elicited by the orchestra. When Violetta, in Act Three, imagines herself better, the touching love music of Act One was heard trembling high in the orchestra. When Alfredo entered the party in Act Two, the orchestra persuasively played a compulsively recurring motif on the lower strings and winds. The orchestra, conductor and singers were in synchrony throughout the entire performance.