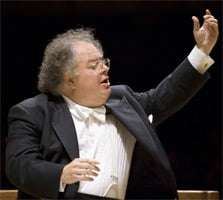 According to his own report at a Symphony Hall press conference on September 24, BSO Music Director James Levine is recuperating steadily from his bout with kidney cancer, which caused him to miss most of the Tanglewood season. Since returning to the Metropolitan Opera on September 18, when he led the company in a special performance of Verdi’s “Messa da Requiem” in memory of Luciano Pavarotti, Levine has kept busy with conducting assignments in New York and Boston. Four days after the memorial concert for Pavarotti, he conducted Act Two of “La traviata” as part of the gala opening performance that kicked off the Met’s 125th-anniversary season. Two days after that, he led the all-Russian program that marked the opening of the BSO’s new season. And two days after that, he returned to Boston Symphony Hal to lead the first of two performances of Brahms’s “Ein deutsches Requiem” (A German Requiem).

In a program note, Levine describes “A German Requiem” as “a work that always needs to be cherished and stay special” and goes on to say that “one just can’t come to it on any sort of regular basis”. He has in fact very rarely come to the piece. Prior to this past week’s performances with the BSO he had conducted the complete work on only two occasions: in 1983 with the Chicago Symphony (which he also recorded) and in 1995 with the Philharmonia in London.

Levine was at the top of his game on this evening. Following a long and ardent welcoming ovation from the sold-out house, he launched the orchestra into a powerful, sensitive and gripping account of Brahms’s taxing score. The performance was impressive in every way. Using the large forces at hand (including the 125-member Tanglewood Festival Chorus), Levine delivered a vigorous, dedicated reading, marked by propulsive impact and full of dramatic contrasts. This was Brahms at his most powerful and moving. The opening movement with its pulsing double basses was ominous, yet aptly gentle, and set the tone for the whole performance, during which Levine maintained an ideal balance between vocal and orchestral forces. Instrumental details were perfectly pointed and allowed to emerge clearly and naturally.

The solo singing was magnificent. Michael Volle demonstrated a rich, muscular baritone, which he used with both intensity and finesse. Christine Schäfer, with her bright, clear-toned soprano, produced a radiant, ethereal sound and brought out every ounce of emotion in the wistful ‘Ihr habt nun Traurigkeit’ (And he now therefore have sorrow), her central solo, as the warm orchestral playing and soft choral singing floated in the background.

The Tanglewood Festival choristers were a marvel of precision and focus throughout all seven movements. Singing from memory, while displaying superb diction and abundant energy, they were most impressive in the great fugues, dispatched with tremendous vigor and a thrilling range of choral sound. This was a performance that brought out all the drama and intensity of Brahms’s ambitious and heartfelt work.