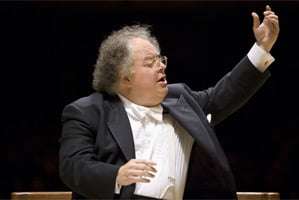 After being sidelined since late September because of back surgery, BSO Music Director James Levine returned to the Symphony Hall podium on this night. In a program note, Levine wrote that “no words could possibly express how thrilled I am to be back here!” No words were needed. After a quick wave to the audience, a beaming Levine sat in his swivel chair and proceeded to lead a generous program of four major but highly contrasting works without any loss of energy or enthusiasm.

Pierre-Laurent Aimard was the brilliant soloist in Elliott Carter’s Dialogues (2003). Like Levine, Aimard is an active proponent of Carter’s music (he played the world premiere performances of the composer’s Caténaires and other smaller piano pieces), and it is impossible to imagine Dialogues being played with more conviction or expertise than it was on this occasion. The single-movement concerto is framed as a conversation between piano and orchestra. Written when Carter was 93, the piece is marked by the composer’s trademark complexity. The score is by turns argumentative, spirited and reflective as the different participants in the impassioned “conversation” (solo piano, English horn and various instrumental groups) interact, and the musical elements in the narrative constantly shift and overlap. The BSO forces and Aimard delivered a splendid performance, elucidating the spirited discourse with amazingly artful expression. 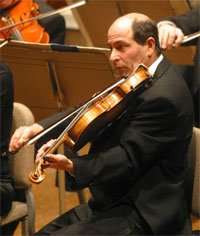 The orchestra continued with the dialogue theme in Berlioz’s de facto viola concerto, Harold in Italy, with BSO principal Steven Ansell as soloist. Under Levine, he and the orchestra gave a very fine performance of the piece at Symphony Hall last season. On this occasion Ansell’s wonderfully refined and lithe playing, supported by a robust and dramatic account from the orchestra, was equally memorable, with harpist Jessica Zhou making an especially beautiful contribution in the first movement.

The theme of musical conversations carried over to the second half of the program when Aimard returned for Ravel’s Piano Concerto for the Left Hand. The highly virtuosic pianist gave a brilliant and poetic an account of Ravel’s engaging piece, with Levine and the orchestra providing admirable support. The performance was especially notable for the way Aimard and the BSO players revealed the jazzier side of Ravel’s yearning, troubled work.

The concert came to a close with a warmly expressive account of the Second Suite of Ravel’s Daphnis et Chloé, a piece very familiar to the BSO. While past performances may have sounded more sumptuous or richly-hued, this account displayed some radiant woodwind playing (principal Elizabeth Rowe’s solo flute deserves special mention) and had a finely controlled sensuousness that was very appealing.