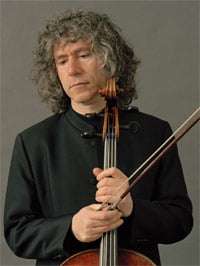 A special attraction of this concert, aside from the prospect of Vladimir Ashkenazy conducting a Tchaikovsky symphony with which he has been long associated, was Steven Isserlis playing Elgar’s deeply introspective and much-loved Cello Concerto. His is an interpretation that fuses emotional commitment with an unusual degree of restraint. The opening phrase was quietly contemplative rather than a dramatic flourish, and this approach characterised the reading as a whole. At certain moments the emotional temperature was judiciously raised – when the main theme reoccurs towards the end of the first movement, or at the extraordinary pizzicato link to the second. Isserlis was technically secure in the demanding ‘scherzo’, and there was also some very distinguished playing here from the Philharmonia Orchestra’s wind section. In the Adagio Isserlis evinced a level of innigkeit that was particularly affecting, especially at the close; and aside from its more energetic stretches, the finale offered further evidence of Isserlis’s refined eloquence. 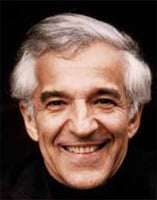 Whereas Ashkenazy did not seem to have Elgar’s idiom quite under his belt – the disparate elements of the work not entirely cohering into a unified whole – he was on surer ground with Tchaikovsky’s Manfred. The brooding opening, depicting the isolated protagonist wandering in the Alps, was thrillingly launched with especially vivid playing from bassoons and horns, a constant pleasure throughout the concert. As the depiction of Manfred’s tortured soul reached climactic moments, the richness of the Philharmonia Orchestra’s playing was beyond argument, albeit there were occasions – not least in the finale – when one would have liked the frenzied episodes to be more unbridled. But emotional warmth there was in spades, the Astarte section particularly notable for the quality of playing from strings and woodwinds. The final pages of the first movement, depicting Manfred’s anger and powerlessness, came over strongly.

In the second movement there was a wonderful lightness in the playing of the elusive fragments of fairy music; while in the concluding phrases the music flickered spectrally into nothingness – magical writing, here magically realised. The Andante commenced with a beautifully phrased contribution from oboist Christopher Cowie, followed by ravishing playing from the violins. Ashkenazy and the Philharmonia vividly conjured up Tchaikovsky’s idealized pastoral scene, sensitively alternating between the episodes of repose and rumbustiousness.

Not long after the 1886 premiere of Manfred, Tchaikovsky more or less wrote off the finale, which has attracted much criticism over the years, although the Bacchanalian aspect remains an attraction. But the ‘Pathétique’-like desolation, as Manfred moves towards his end, was here powerfully conveyed. The climax of the movement was diminished by a less than ideally calibrated lead into the organ part, which when it arrived was somewhat ineffectual. That said, there was real serenity in the final pages, with trombones, clarinet, and bassoon making notable contributions.