As Gerard McBurney pointed out in his pre-concert talk, providing essential context of the importance of Weimar in the German consciousness of art over the last few centuries, Liszt – “Kapellmeister Extraordinaire” for twenty-four years in Weimar – was such a prolific composer that works are still being unearthed in archives. While Kirill Karabits has been music director in Weimar he has been on a mission to discover more Liszt and has revived after 160 years the curious melodrama Vor hundert Jahren (A Hundred Years Ago) which Liszt composed for a celebration of the centenary of birth of Friedrich Schiller. 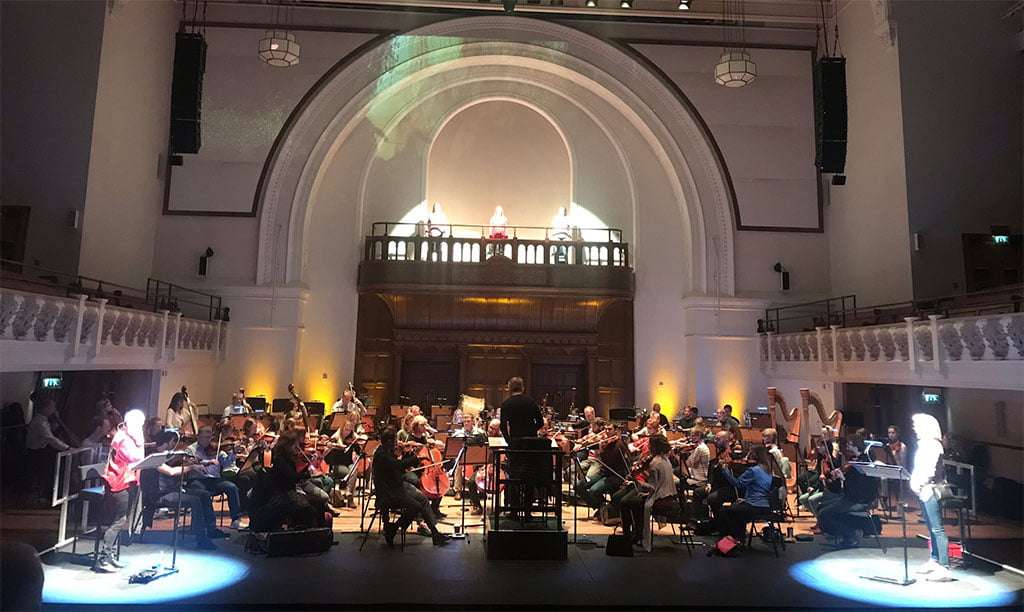 Originally staged on 9 and 10 November 1859, it is a true occasional piece, a poem set to music telling a potted life of Schiller, for two reciters and three additional voices (or at least in McBurney’s reconstruction). I was intrigued that Alan Walker’s magisterial three-volume biography of Liszt only references it twice, with little detail, save that Liszt did not attend the centenary celebrations, even though he’d provided the music. McBurney detailed the various tableau, how the persona of Germania (here voiced by Sara Kestleman), despairing of her county, is calmed by Poetry (Jemma Redgrave) in her extolling of Schiller.

Through a sequence of tableau Poetry summons up Schiller’s oeuvre – prefaced by the appearance of three Greek fates – firstly Ode to Joy with a blast of Beethoven, then reference to The Robbers, Wallenstein, Mary Stuart, The Maid of Orleans and finally William Tell. It’s like a formative version of This is your Life, where the words (coming thick and fast and here amplified for the occasional passages over music) seem to demand too much of our attention. The only thing in Cadogan Hall that didn’t quite come off was the video projections indicating the various tableaux that the obviously grandiose effects that graced the Weimar premiere. The staggered relief of the arches above the platform obscured the centre of each image.

Musically I’m not sure if I heard any of the score blind that I’d immediately identify the composer as Liszt. It certainly pointed up Liszt’s links to composers of his time and his promulgation of Berlioz, Saint-Saëns and Wagner in Weimar. Brass fanfares and stabbing chords open Liszt’s Kunstlerfestzug (Artists’ pageant), originally played both played outside and inside the venue, swaggering and more lyrical (horn and harp) by turns, before a second Overture – depicting the Seven Years’ War (a hint of Smetana here, perhaps, who had his own Schiller work, Wallenstein’s Camp) – introduces a trouble Germania. Beethoven is directly quoted with the Ode to Joy reference. It would be good to hear just the music shorn of the words, however well-paced and presented by two great British thespians, Redgrave coping without dropping a syllable when her microphone cut out occasionally. Indeed, the two Overtures might separately find themselves a niche on the concert platform.

As indeed might Hummel’s Freudenfest, his eventual title for a work originally composed for an 1814 concert in Vienna entitled Die gute Nachricht (‘The Good News’ being the impending dethroning of Napoleon and his first exile). Classically presented by Karabits, with orchestral forces building from just two double basses, a short introduction – long chord, timpani solo, wind chorale – ushers in a Schubertian main allegro theme that returns like a rondo after various episodes – the most striking being God Save the King (Hummel referencing allies standing against Napoleon). This was lovely to hear.

After the interval there was another look-back to the past, in the assured hands of Richard Strauss – another Weimar music director in his time – in the Der Rosenkavalier Suite. The by-now full-strength Bournemouth Symphony relished Strauss’s opulence, and very satisfying it was too.