Though subtitled “Britten in America”, the concert could also have been labelled ‘An American in Britain’, with the London premiere of Muhly’s song-cycle “Impossible Things” the centrepiece of the second half. A substantial three-movement work lasting some 28 minutes, this received a passionate and incisive performance from Mark Padmore, singing the words of C. P. Cavafy as translated by Muhly’s friend Daniel Mandelson.

Muhly demonstrated an assured vocal-writing style in response to the keening of the poems, harking back like Britten to Purcell and keeping an impressive trajectory to the tenor line. This he complemented with imaginative writing for string orchestra and concertante violin, played with great character by Kuusisto. Particularly striking was the closing passage of Part I, setting ‘Near an Open Window’, where Kuusisto was required to whistle softly in unison with his solo part. Strangely moving, it elicited immediate applause.

Violin and tenor often shared rhythms and occasionally melodic contours, though in Part II Padmore had to hold on gamely to his legato line as the string orchestra became increasingly rough with its interjections. Part III is initially set to an emotive passacaglia, the measured walking bass introduced by double bassist Stephen Williams, and ended with a driving setting of the title poem that ended abruptly. Only here was balance an issue, the string-writing crowding Padmore’s middle register.

Overall, however, this is a most impressive score that carries considerable emotional heft, the tension rarely letting up and the string-textures beautifully rendered as they shifted in accompaniment. 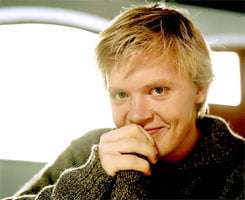 Placing this in second-half context was the brief yet attractive Duet by Steve Reich, pitting the dancing canonic figures of violinists Kuusisto and Jacqueline Shave to the rhythmic throb of a reduced string section. This increased in number for John Adams’s Shaker Loops, at more than thirty-years-old something of a staple in the minimalist repertoire. Kuusisto led this with real flair, the strings flocking around the central notes of ‘Shaking and Trembling’ before dispersing for the strange, sighing harmonics of ‘Hymning Slews’. The quick pulse was maintained with admirable precision, the greater density of the composer’s string instrumentation lending a pleasing weight to the sound. The combination of legato phrases and bursts of kinetic energy evoked the spaciousness of Adams’s New Hampshire habitat, often heard as from afar.

The first half placed Benjamin Britten’s escape to New York in the late 1930s in musical context, and culminated with a vibrant performance of “Les Illuminations”. Suitable for either soprano or tenor, the sparkling vocal-writing in the Rimbaud settings was here brought to life by Padmore, from the crisp attack of the opening ‘Fanfare’ to the sighing end of ‘Phrase’. At times he floated effortlessly above an energetic but sensitively handled string accompaniment. ‘Marine’ was particularly ecstatic, while the longer phrases of ‘Being Beauteous’ were more intense, the emotional heart of the cycle.

Performed without a break, the first half began with Purcell in original and adapted form. Tippett’s adaptation of ‘Dido’s Lament’ as part of his Divertimento on Sellinger’s Round was particularly moving, while Muhly’s orchestration of ‘Let The Night Perish’ purposely ignored Britten’s piano arrangement, adding subtle touches to the string orchestra accompaniment. The Fantasias were especially effective, however, performed in string quintet form, with viola player Catherine Musker handed the middle ‘C’ of the Fantasia upon One Note. For its forty-nine bars she walked into the stalls and back, a simple but effective ploy that showed the Sinfonia’s ever-evolving approach to music-making, uniting players and audience.

Kuusisto, the evening’s often-amusing compere, introduced an encore of ‘The Path of His Beloved’, the second movement from Sibelius’s Rakastava Suite. Affectionately played, it made an ideal end to the evening’s music – as well as placing its composer’s influence on Shaker Loops in direct context.