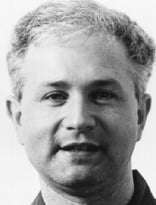 Fifty this year, and with the thirtieth anniversary of his major debut as a composer (at the Proms with Ringed by the Flat Horizon) fast approaching, George Benjamin has built up a select output of a diversity that was fully evident in this concert with the London Sinfonietta. While by some distance the simplest pieces of his maturity, the ten miniatures that comprise Piano Figures (2004) are by no means simplistic – inherent contrasts offset by a process of echo and anticipation so the sequence unfolds as a cumulative whole, at least as conveyed by Benjamin himself in this immaculate rendition.

By contrast Viola, Viola (1997) is one of his most intricately-worked pieces, its textural complexity belying its uniformity of instrumentation. This performance was billed as Duet, Duet and featured a choreographic enactment of Benjamin’s score. As vividly imaginative as Matthias Sperling and Rachel Krische were in response, the visual element often obscured when it might have been complementing the music; not helped by positioning the players stage-left, so what seemed a scrupulously prepared account by Paul Silverthorne and Eniko Magyar felt to be as hemmed in sonically as it was spatially.

No such problem affected the performance of At First Light (1982), the most durable of Benjamin’s earlier pieces and a fine instance (as well as a surprisingly late one?) of visual means – here Turner’s typically refracted depiction of Norham Castle at sunrise – translated into evocative and yet wholly abstract ends. The work proceeds from a ‘scene-setting’ prelude that outlines the motifs to be developed – first in a movement of disjunctive contrast, then in one of seamless continuity; music that calls for virtuosity in soloistic and ensemble terms, with the present performance having both in abundance.

If, in comparison, “A Mind of Winter” (1981) feels less completely realised musically, this setting of a typically elusive poem by Wallace Stevens – itself admitting any number of ‘approaches’ – remains one of Benjamin’s most alluring scores; not least in that its richness of instrumental detail does not obscure a comparatively spare yet exquisitely nuanced vocal line. The latter was elegantly projected by Claire Booth, Benjamin ensuring voice and ensemble remained in perfect accord throughout. It helps that, in poetry such as this, sense and sound become integrated such that a greater unity emerges.

While not his most recent larger work, Palimpsests (2002) is undoubtedly Benjamin’s most imposing in terms of its overall impact. The process whereby ideas are written over, without wholly erasing, earlier ones is not new in musical terms, but can rarely – if ever – have been realised as impressively as here. This has much to do with the inevitability with which the process unfolds over the two-part whole, thus ensuring an onward momentum (something that might be termed ‘symphonic’ within the context of other composers) not so much absent as latent in Benjamin’s earlier music. Once again, the performance was a responsive one – not least in the way the musicians of the Royal Academy of Music’s Manson Ensemble interacted with those of the Sinfonietta so that the mere question of experience never surfaced. Judged as music-making, then, it proved to be the highlight of a memorable evening.