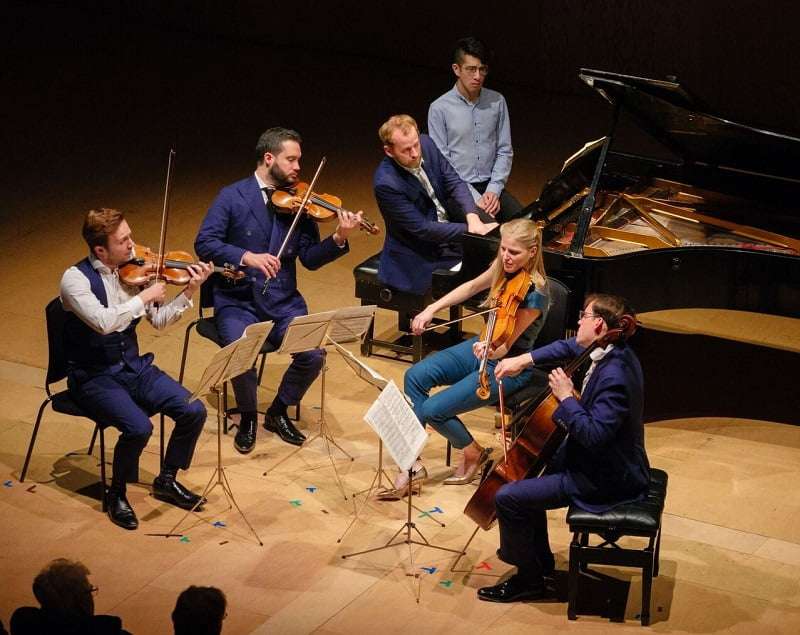 There were some nice symmetries in this programme that kicked off Aldeburgh Music’s Britten Weekend, bookended by the Doric Quartet and featuring two other string ensembles as well as an oboist and a pianist. Later the Doric itself would play Britten’s three great String Quartets having recorded them for Chandos, to be released.

The two youthful Britten works both date from 1936; the Korngold and the Copland are about a decade older and represent the kind of new music that the young Britten would have heard as he developed. They also come from composers who crossed the Atlantic (as Britten himself was to do); the American Copland wrote his Movement while studying in Paris with Nadia Boulanger; the Austrian Korngold would emigrate to Hollywood.

Oddly for such a string-dominated programme, the highlight was perhaps the one work that doesn’t involve strings: Britten’s Temporal Variations for oboe and piano. This is an intriguing study in contrasts, sometimes highly economical, sometimes laden with more notes than seems plausible. Often humorous, as in the ‘Polka’ with its ludicrous accelerando and decelerando effects, it is also capable of being touching – for example in the plaintive ‘Chorale’ or the more tentative passages of the ‘Waltz’. The pianist is very much the oboist’s partner and both musicians handled the bravura demands with gusto. 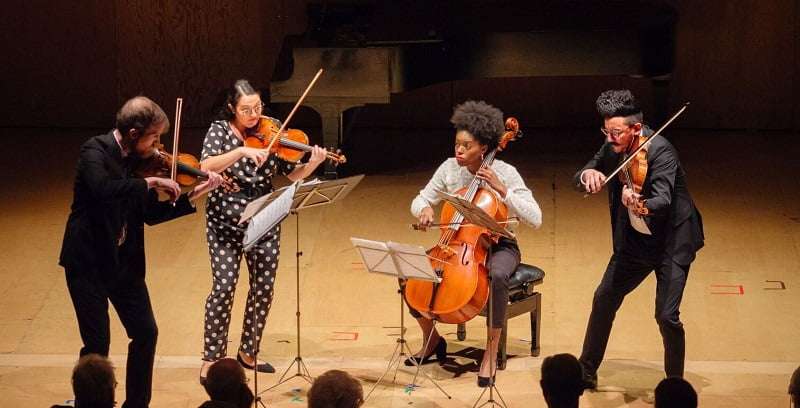 There was much to appreciate from the strings too, though. The Doric members grabbed the attention straight away with the jagged short phrases and insistent single notes of Britten’s Three Divertimenti, also a youthfully ambitious exercise in contrasts: sometimes wry (as in the second movement’s odd gaps, rhythmically wrong-footing the listener), at other times (most notably in the Finale) looking forward to the composer’s maturity.

Copland’s Movement (played by the Thalea group) is very French-sounding though one can hear occasional hints of the music to come. Similarly, in the second movement of the Korngold – the most effective, especially in its quieter passages – the future film composer could be detected. There may not have been many dry eyes in the house. It was only a pity, in an evening largely characterised by faultless string-playing, that at several points of the Korngold the Doric musicians were under-powered; perhaps it is a case of the music itself really calling for an orchestra.

In among this material of the 1920s and 1930s came a new piece, John Woolrich’s Badinerie, premiered by the Ansonia Quartet at the Museum of Modern Art in New York this summer. It is one of six String Quartets that Woolrich has collectively named A Book of Inventions. Described by the composer as “constructed from broken shards of music, glued together to make a single movement”, the ten-minute Badinerie is not of great thematic interest (though there are some startlingly long melodic lines) and much of its fascination lies in texture: not least the fading, ghostly conclusion and the extensive pizzicato passages earlier. In a fine performance by the Tesla Quartet, Edwin Kaplan and Serafim Smigelskiy stood out.