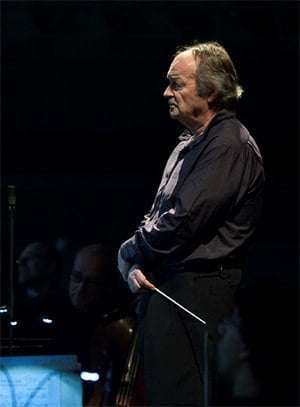 This was the final third of a Cadogan Hall consecutive-evening triptych for the Brussels Philharmonic (which recorded the soundtrack for The Artist) and Michel Tabachnik. This was not their first visit to Sloane Square and they will be returning. Rightly so, for this is an admirable orchestra (without ‘Orchestra’ in its designation) and an admirable conductor – together they make a notable partnership.

Pre-concert publicity suggested that we would get Mussorgsky’s Night on the Bare Mountain as he wrote it (and making a comeback these days – recent performances from the LSO and Kensington Symphony Orchestra, for example); but, no, it was the tried and trusted Rimsky revision, which, however well-intentioned and impeccable in itself, ‘corrects’ the composer’s maverick, untutored, unruly and fascinating creation. Tabachnik paced the piece deliberately, not necessarily suggesting the whole devilish caboodle, but it was all eminently musical and thought through so that the ‘morning after the night before’ final section flowed along as part of the whole.

With Petrushka there was some confusion regarding what the programme note anticipated and what was delivered from the platform. We were informed that the original 1911 score was being used and that the (awful) “concert ending” was also being employed, which removes the eerie final section and the appearance of Petrushka’s ghost. Well that crass curtailment only applies as an option with the 1947 edition and its revised orchestration. Fortunately, Tabachnik gave us Petrushka complete, save for the drum links heralding the different scenes, and he may well have used a hybrid version of the two editions (ear and eye suggested this); he would not be the first conductor so to do. Throughout, Tabachnik’s tempos were well judged, always musically articulate, with dance and description to the fore. But the sound was often too bright (further intimating 1947) – a few more cellos and double basses may have helped better balances in this treble-tilted acoustic, and the prominence of cymbals and bass drum became irksome. Nevertheless, this was a flexible, committed and focussed account that had a good theatrical feel and enjoyed some personable and distinctive-sounding solos.

The concert’s second half, if it can be called that, might well set a record as the shortest ever; for, conducted briskly by Tabachnik, the five-movement Suite that Siloti compiled from Tchaikovsky’s The Sleeping Beauty (after his death) took just 18 minutes to play! Shorter than the interval! We got the Suite as such, but it does scant justice to the 150-minute opus, so there was plenty of scope for Tabachnik to have compiled his own more representative (and longer) assortment. Strange, given he led Bare Mountain and Petrushka from memory, that he needed copy for these few short numbers. That’s by the by, for Siloti’s meagre selection was well performed by the Brussels Philharmonic – unforced in its power and with slower numbers unaffected and heartfelt, the strings finding greater reserves of tone than earlier, and Tabachnik at last encouraging some playing quieter than mezzo forte– a real pianissimo had been at a premium in the first half. A splendid harp cadenza introduced the ‘Rose Adagio’, the woodwinds were vivid with the meows in ‘Pas de caractère’ and there was real beauty (pun acknowledged!) in ‘Panorama’. To close, the Act One ‘Waltz’ was certainly exuberant, no-nonsense would be another description, pushed along and leaving the musicians rather hard-pressed.

Having played it last year on its debut, and also on these last two nights, it was rather bizarre that Brahms’s First Hungarian Dance (only one of three that he orchestrated from the 21 piano-duet originals) should again be the encore! At least Tabachnik didn’t maul this piece like some of his colleagues, giving it a feel-good swing, and the strings now found even greater warmth to their sound. A bit of a chameleon, the Brussels Philharmonic.