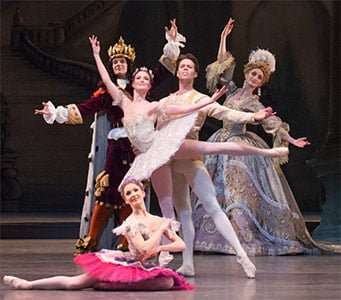 For The Royal Ballet, The Sleeping Beauty means tradition. It has been a ‘signature’ work throughout the company’s history since the now legendary re-opening of Covent Garden in 1946 with Oliver Messel’s production. The company has seen some pretty rum versions over the years and it was Monica Mason’s clear intent to get back to basics when she announced that her new 2006 staging of this classic was to be a recreation of that now semi-mythical production. It has bedded down very well, looking suitably sumptuous and benefitting from some money spent at each revival in order to provide more and more costumes true to Messel’s original intent. Certainly, now in 2014, this is a production fit for this great company and, more importantly, it preserves the sacred choreographic text which was given to the company by Nicholas Sergueyev, the Imperial Russian ballet’s régisseur. Over the years, accretions have built-up, and they now form within this production as a lesson in the company’s history. Frederick Ashton’s additions are most welcome – The Prince and Aurora’s two Act Two solos and his Florestan and his Sisters’ Trio in Act Three. Alas, his delightful Garland Dance is long jettisoned, here in favour of Christopher Wheeldon’s insipid and largely static version where the dancers strike poses and handle hoops of flowers and not much else. Initially, Wheeldon created a very interesting Garland Dance, but that soon disappeared in favour of this excessively tame version. Anthony Dowell’s business for Carabosse and her attendants from his own 1994 staging remains welcome. 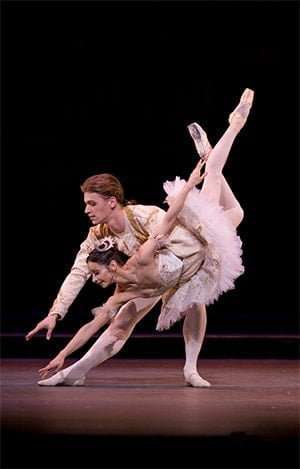 This was a fine performance, fully in the company traditions of this great ballet. At its centre was Lauren Cuthbertson, who has matured into a true ballerina of the English School, which is to say that her performance as Aurora was understated, musically sensitive and displayed a coherence of movement which saw each part of her body in harmony with all the others. She is intelligent and now experienced enough to ‘play’ with the choreography (considered the ne plus ultra of Classical Ballet), introducing rubato into her movement which allows her to breathe within the music and to weave herself in and through it. Technically, she was on impressive form, effortlessly introducing triple pirouettes in the Act One second solo (always, however, within the music) but never exaggerating. This was a notable performance which saw her move from convincing 16-year-old in Act One, to cool vision in Act Two and then to regal bride in Act Three. She engages the audience in her dancing, inviting them into her world of movement, and rewarding them with refined bravura.

Her partner was new company acquisition Matthew Golding in an early debut owing to the continued indisposition of the scheduled dancer. On this showing, Golding’s move to The Royal Ballet can only be cautiously welcomed. He is tall and strong, but his partnering of Cuthbertson took some time to settle (it did feature spectacular ‘fish-dives’ in the final Act Three Grand Pas de Deux) and his own dancing was uneven. He can be forgiven for not quite understanding the demands of Ashton’s silky Act Two solo, which saw some decidedly lumpy dancing on his part, but the Grand Pas revealed some technical faults and a very messy deployment of arms and hands, and a dubious musicality which are all very much at odds with the more precise and integrated company style. The Prince in Beauty is a cipher, but great artists in recent years such as Irek Mukhamedov and Johan Kobborg have shown that character and interest can be found. Golding presented a worryingly blank dramatic canvas. 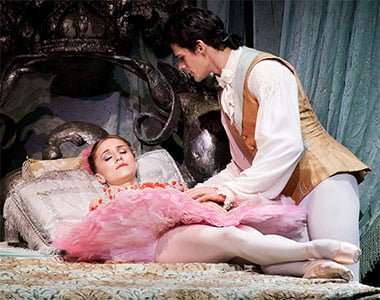 The corps de ballet was pleasing in its alertness both to the music and the correctness of the choreography, and, despite some whole-scale changes in the line-up, Aurora’s Friends are to be commended on their shared musicality. The Sleeping Beauty possesses so many opportunities to shine, from the dazzling sequence of solos for the Fairies in the Prologue to the fairy-tale characters of the final Act. Francesca Hayward and James Hay caught the eye as the Fairy of the Song Bird and her Cavalier in the Prologue – they both move with unforced ease, and she succeeded in making her solo into something rather charming. Hay is an elegant dancer, as shown later in the Bluebird pas de deux in which he sailed through the manifold technical challenges with seemingly little effort – he is another young dancer who is very much in the English style of restrained elegance.

Olivia Cowley was a Fairy of The Crystal Fountain with a richly pliant torso and Yasmine Naghdi impressed as a precise and bending Fairy of The Woodland Glade and the only dancer of the Act Three Florestan pas de trois to show understanding of Ashton’s idiom. Melissa Hamilton is not yet gracious or generous enough as the Lilac Fairy, lacking the benevolent warmth that the great interpreters radiate, and while ‘game’ in her fiendish solo, merely served to confirm that this role should always be cast with a Principal. The character roles were mixed, from the effortlessly regal King and Queen of Gary Avis and Christina Arestis, and a finely drawn Gallison from Bennet Gartside, to a ridiculously over-the-top Cattalabutte. Elizabeth McGorian was a viciously glamorous wicked fairy Carabosse.

A few ‘parps’ in the brass apart, the orchestra was, thankfully, on very good form, Valery Ovsyanikov coaxing some especially beautiful string playing and keeping tempos brisk, which always makes for a tighter and more engaging performance. The company is looking good at present, with Director Kevin O’Hare bringing forward several young dancers in important roles, and, on the evidence of The Sleeping Beauty, presenting increasingly shared musicality and movement quality.