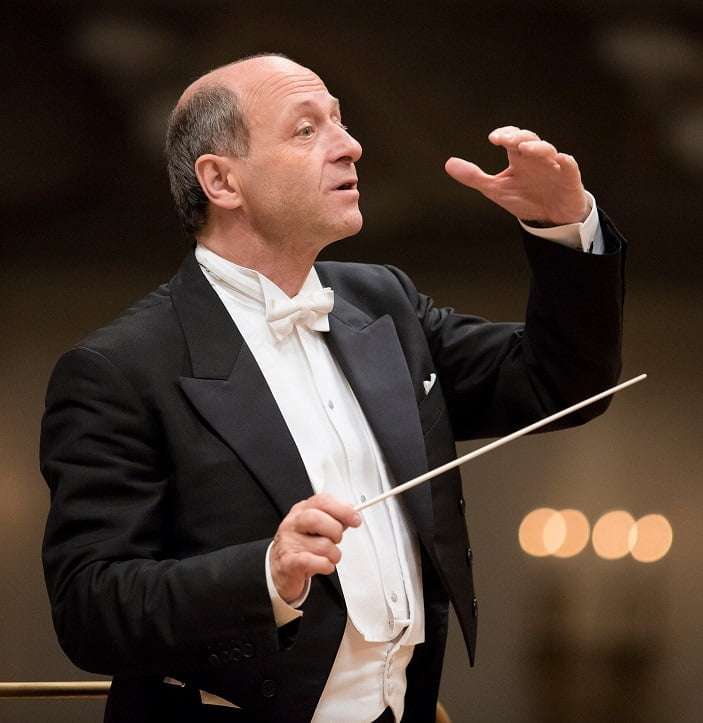 As part of a US tour Iván Fischer brought his Budapest Festival Orchestra to West Palm Beach’s Kravis Center for a pair of concerts. This holiday-matinee comprised two of Brahms’s Symphonies, with music by Mozart and Mendelssohn to be performed the following evening.

Brahms’s Third Symphony was in the first half so that “its wistful (and transfiguring) conclusion can be appreciated before the intermission”, and the “resplendent, climactic finish of the First Symphony can be enjoyed as a finale.” This arrangement worked quite well in practice. Conducting from memory throughout, Fischer was in constant motion on the podium, his gestures often seeming to depict the musical lines, particularly during woodwind solos.

Fischer took some liberties with the Third Symphony’s tempos in order to emphasize its lyricism and charm, efforts that were, by and large, quite successful. Although the BFO, including eight double basses, provided plenty of power in tutti passages, Fischer was careful to allow the lovely tunes played by the woodwinds to shine through. Thus in the Allegro con brio exposition, he signaled the strings to quieten as Ákos Ács played the lilting second subject on clarinet, repeating the gesture during the repeat. There were also excellent solos by flautist Erika Sebök, oboist Victor Aviat and principal horn Zoltán Szöke before the movement drew to a soft close.

The Andante is pervaded by a rustic theme, played at the outset by clarinets and bassoons and soon echoed by strings, alluding to the three-note motif that begins the Symphony, although its character is much gentler. In lieu of the more traditional scherzo, the third movement, marked Poco allegretto, is a lyrical intermezzo featuring the Symphony’s most memorable theme, first heard in the cellos, but later prominent in Szöke’s brilliantly played solo. Fischer’s body mirrored the sinuous opening theme of the finale and his thrusting gestures evoked powerful playing, the brass shining through. A quieter passage featured delightful interplay between swirling strings and delicate woodwinds, and the violins glistened in the concluding bars, Fischer holding the final chord for an extra few beats.

The BFO’s performance of the First Symphony focused on dramatic tension. From the opening persistent drumbeats onward, Fischer brought a sense of powerful propulsion to the music. The string sound was particularly rich in the slow introduction, which also had fine solos on oboe and flute before the Allegro broke out with sudden force, the strings overpowering the winds, but this flaw was soon corrected. There was plenty of Sturm und Drang, driven by brass and timpani with double basses and contrabassoon rumbling deeply, and as the movement neared its end, the strings took on the character of a lament.

The violins were gorgeous in the Andante sostenuto’s opening lyrical theme, punctuated by pulses from the horns, and solos by Aviat and Áco were outstanding. Fischer increased the intensity of expression as the movement progressed. Violetta Eckhardt’s violin solos were superb, giving the final passages of the Andante a glowing character. Áco’s clarinet was again prominent in the third movement, Fischer manipulating tempos in order to make a seamless transition to the finale’s Adagio introduction. A trombone chorale paved the way for the body of the movement, with its sweeping theme first heard on the low strings, then proliferating across the orchestra. There was a rollercoaster ride to the finish, performed with explosive force and sustained drama, capping a marvelous concert.

As an encore, the musicians sang, a cappella, Brahms’s Abendständchen (Evening Serenade).