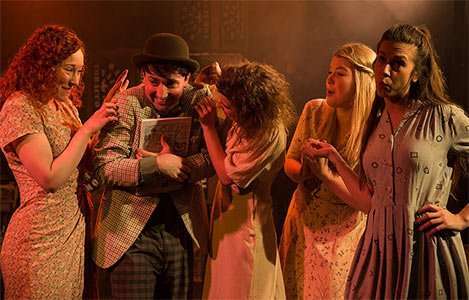 The lyricist Edgar Yipsel (Yip) Harburg, born in New York to Russian émigrés, was a lifelong friend of Ira Gershwin. He began his writing career in the early 1920s, composing light verse for newspapers, although later he became a businessman but lost all his money when his electrical appliance company went under in the Wall Street Crash of 1929. On the advice of Ira, Harburg turned to showbusiness and began writing lyrics for revues. His song ‘Brother, can you spare a dime?’ written with composer Jay Gorney, if based on a Russian lullaby, became the anthem for the Great Depression. Even then, Harburg’s approach to writing was different from most other lyricists. He helped create standards such as ‘Last night when we were young’, ‘April in Paris’, ‘It’s only a paper moon’ and ‘Down with love’, not forgetting ‘Over the rainbow’, which was nearly cut from the film of The Wizard of Oz, but went on to win an Academy Award. Many of Harburg’s songs have a point to make, about social justice, prejudice, temperance, women’s rights, fame or love. He collaborated with only the best composers – Harold Arlen, Jerome Kern, Sammy Fain, Jule Styne – and Burton Lane, with whom he co-created Hold On To Your Hats (1940) and Finian’s Rainbow (1947).

Finian’s Rainbow was probably the first Broadway musical to have a racially integrated black and white chorus line, dealing as the show did with bigoted white Senator Rawkins in the imaginary southern state of Missitucky, and his redneck sheriff. They rule the local roost by giving a hard time to the peace-loving, rural co-operative community of farmers growing tobacco in Rainbow Valley. Enter Irish immigrant, Finian McLonegan, and daughter Sharon, who brings with him a crock of gold which he 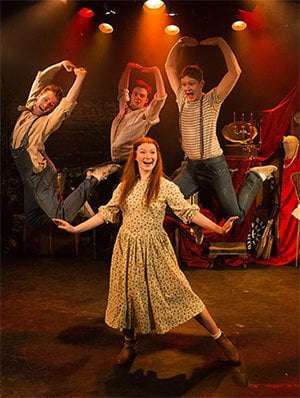 plans to bury in Rainbow Valley as it is close by Fort Knox. He hopes this will make his bullion even more golden! If that isn’t enough to test an audience’s imagination, Finian is followed by a leprechaun called Og, owner of the bars, who needs to retrieve them before he is turned back into a human being. Sharon falls for local lad Woody Mahoney who is trying to cross tobacco plants with mint to produce instant mentholated cigarettes! He also has a mysterious mute sister, Susan the Silent…

All of this whimsy and satire (or, as director Phil Willmott calls it, “gossamer-thin moonshine”) went down surprisingly well on Broadway in 1947 – the show ran for over 700 performances – but London could only stomach fifty-five at the Palace Theatre. Although it has been frequently revived in the States, it only now returns to the capital. In the 1950s cartoonist John Hubley tried to make an animated film of the show, but it remained unfinished. In 1968 Francis Ford Coppola (of all directors!) filmed it with Fred Astaire, Petula Clark and Tommy Steele. It was a good attempt and it retains a certain charm if you can stomach the ‘Oirishness’ of the leading players and believe in Steele as a far from subtle leprechaun.

Somewhere along the line the show’s awkwardly racist attitudes have been toned down (presumably in the adaptation by Charlotte Moore). The author of the book, Fred Saidy, was pleading for tolerance and anti-racism, even though the piece now seems racist in itself, with its odd view of the Irish. In the original libretto the Senator is turned from bigoted white man to humble black man; here and now he is made poverty-stricken. Skirting round the ethics of the piece, however, it is still possible to enjoy it, mainly because the lyrics and music are so brilliant. Lane’s melodies, often invoking the lilt of Irish music, are immediately memorable. The show is packed with great tunes, from ‘How are things in Glocca Morra?’, ‘Look to the rainbow’ and ‘Old devil moon’ to ‘If this isn’t love’, ‘When the idle poor become the idle rich’ and ‘When I’m not near the girl I love’. The last is the cleverest and wittiest of them all – “When I’m not near the girl I love, / I love the girl I’m near.”

Wilmott has gathered nearly a two-dozen cast to fill the minuscule Union stage and does wonders – great dancing to vibrant choreography, excellent singing accompanied by Richard Baker’s trio of musicians, and expert direction that keeps matters on the move. James Horne as Finian is strong and sturdy, not a man to be crossed, but he’s likeable too. Christina Bennington as Sharon is a feisty chip off the old block, while Raymond Walsh manages to make Og quite endearing, a being who knows what he wants (his stolen gold) and is determined to retrieve it before he has a chance of finding out, on meeting Susan the Silent (an ethereal Laura Bella Griffin), just how wonderful it is to be a human being. As Woody, Joseph Peters stands up for what’s right in the world against the appalling Rawkins who is now more an outmoded figure of fun than total monster as played by Michael J. Hayes, who seems not unlike Zero Mostel. This is a truly terpsichorean dream of a show that, provided you are in an accepting mood, will have you sharing the director’s feelings. When he saw the show in Ireland and on Broadway he felt that he “was walking on air.”