Candide
Operetta with music by Leonard Bernstein, book adapted from Voltaire by Hugh Wheeler, and lyrics by Richard Wilbur, with additional lines by Stephen Sondheim, John Latouche, Lillian Hellman, Dorothy Parker and Bernstein [performed in a version adapted for Menier Chocolate Factory based on that for Scottish Opera] 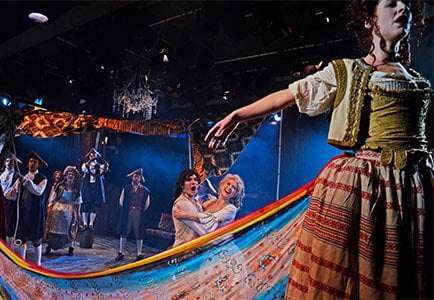 I can think of no jollier Christmas treat than the Menier Chocolate Factory’s production of Leonard Bernstein’s Candide, crammed with the most marvellous melodies and based on Voltaire’s satirical novel. I have adored the work since hearing the recording of the original cast, a ‘desert island’ disc. The show has had a chequered history with much revision since it first appeared on Broadway. It opened in 1957, when New York had seven daily newspapers. Only one of the theatre critics gave Candide an unfavourable review, the others ranged from mixed to rave, “a brilliant musical satire”, “lush, lovely and elegant” and “the best light opera since Richard Strauss wrote Der Rosenkavalier in 1911… a work of genius.”

The principal criticisms were for the libretto, fashioned by Lillian Hellman and considered heavy-handed and serious where a light touch and levity were called for. Despite the reviews, it ran for only 73 performances, giving credence to the remark of George S. Kaufman, “Satire is what closes on Saturday night.” Thank goodness that recording was made with a fine cast headed by Max Adrian, Barbara Cook and Robert Rounseville, and a steady seller ever since! (The cast recorded it twice, in fact, for it was the early days of stereo when microphone placement had to be different for that and the mono and versions.)

The route to recovering the piece began in 1973 when director Harold Prince revived it, much scaled down, but with a new book by Hugh Wheeler, who went back to the novel, and some new lyrics by Stephen Sondheim. This was a mixed blessing, for Sondheim’s words, though inferior to the original ones by Richard Wilbur, have been retained ever since, lessening the impact, in particular, of two of the wittiest numbers, ‘The best of all possible worlds’ and the dazzling waltz, ‘What’s the use?’ Nevertheless, it ran for 740 performances. In 1982 New York City Opera gave Candide a luscious production directed by Prince with John Mauceri conducting. In 1973 he had had the task of fitting existing songs to a new libretto! London has seen Candide at least four times – the original production in 1959, a Scottish Opera version (on which this Menier staging is based) in 1988, at the National Theatre in 1999 (a laudable attempt that needed 20 minutes shorn), and a radical English National Opera presentation in 2008.

The Menier production does not initially promise well. The Overture has become a popular concert item, five minutes of sheer delight. Scaled down for nine musicians by the talented arranger Jason Carr, it is played with sprightly attack under the direction of Seann Alderking when, to loud whoops, the cast comes milling onto the stage, giving animated gestures and even at one point talking, reducing the Overture to background music: a shameful lack of judgement. Things can only get better, and they do. 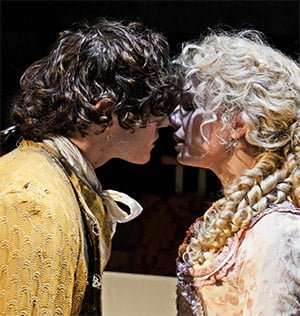 The romantic leads, Candide (Fra Fee) and Cunegonde (Scarlett Strallen), are in glorious voice, whether lyrical or comic. They delight in the duet ‘Oh happy we’, sung after Candide has proposed and they each sing of their idea of wedded bliss – Cunegonde envisioning a life of riches and “breast of peacock”, while Candide contemplates rustic farm life and “apple pie”, neither of them having the faintest idea of the other’s thoughts. Their teacher, Doctor Pangloss, who instils in them the belief that “all is for the best in the best of all possible worlds”, is played by James Dreyfus, who doesn’t have the precise enunciation that Max Adrian gave to the role, but brings a campy mischievousness that is quite beguiling.

Director Matthew White makes grand use of the theatre’s four-sided playing space, and Paul Farnsworth’s period costumes are brightly colourful. The work moves with vigour – some earlier productions were accused of a ponderous pace, but this version is decidedly lively. Strallen has the stunning solo with which Barbara Cook brought down the house, the fiendishly demanding coloratura ‘Glitter and be gay’, which deliciously betrays Cunegonde’s avarice while parodying the ‘Jewel Song’ from Gounod’s Faust. Strallen also gets the biggest laughs for her increasingly manic animation as she plies herself with trinkets, even finding them in a chandelier.

Fee’s tenor is heard to advantage in ‘It must be so’ and ’Eldorado’. Cassidy Janson is delightfully playful as the accommodating Paquette, and David Thaxton as the vain Maximilian is amusing and vocally pleasing. Jackie Clune gets laughs as the old lady with half a buttock, giving a fiery rendition of ‘I am easily assimilated’, an electrifying tango with lyrics by Bernstein himself. Two other grand numbers, the buoyant ‘Bon voyage’ and the stately ‘My love’ are given full value by Ben Lewis. ‘What’s the use?’, a ravishing waltz that builds to a rapturous choral climax, almost stops the show, and probably would have, had it had the original lyrics.

At three hours a little pruning would not go amiss – ‘Words, words, words’ could go. But for the most part it is a delightful journey that one takes with Candide and his friends as they desperately try to maintain their optimism through the most horrendous adventures. When Candide tells Cunegonde that he saw her die (“you were shot and bayoneted too”) she tells him “We’ll go into that another day”, a ploy that Voltaire uses whenever explanations would be implausible – “It’s a long story” becomes almost a catchphrase. At the score’s end – Bernstein finally signed off an “opera house version” – when Candide and Co finally distrust the bromides of Pangloss, the troupe unites for the moving anthem ‘Make our garden grow’. Sung a cappella, as it reaches its climax it proves a moving finale to a rewarding evening.