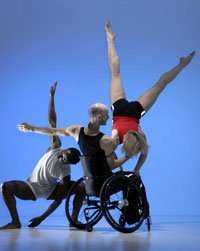 Modern dance companies are hardly a rarity these days, but when the company in question brings together disabled and non-disabled dancers, then a whole new perspective is likely to be opened up. CandoCo has been working towards this over the past sixteen years, and this double-bill was nothing if not contrasted in its means and provocative in its ends: a tribute, in fact, to the artistic vision of Celeste Dandeker, who is stepping down after having guided the company since its inception.

The works in question could hardly have been more different in their approach. “The Stepfather” saw Arthur Pita devising a scenario that might well be described as Sam Shepard meets David Lynch in its combining of taboo family relationships with a ‘small town’ setting. The musical backbone for the production was provided by Gordon Gano and his group The Violent Femmes, their ‘left-field’ brand of country-rock the focus of much student angst during the 1980s. There could be no better example than ‘Country Death Song’ – its searing tones of moral corruption an ideal accompaniment to the tale of incest and suicide enacted in the first few minutes then ‘rewound’ in a brilliant piece of mime.

The remaining half-hour unfolded as a ‘prequel’ to these events as well as presenting the characters: Ray McGillvray the stepfather, Priscilla the Ukulele Lady (introduced in a wonderful cameo featuring Ethel Merman’s song of that name), her daughters Casie Dawn, Dolly Rose and Ella Mae, and Jimmy Horn the ‘brawny barman’ . The (not necessarily causal) seductions of Priscilla by Jimmy and Ella Mae by Ray were vividly stylised; with the denunciation of Ella Mae by her mother and sisters, and Ray’s descent into suicidal remorse, starkly yet powerfully conveyed – with only an atmospheric backdrop against which the fateful denouement was prepared. A commanding performance, suave and raunchy by turns, from Nadia Adame, and a scintillating double-act from Jorge M. Crecis and Marc Brew that left one uncertain which of them was actually wheelchair-bound. Vivid sets and costumes from Simon Daw, along with resourceful lighting from Chahine Yavroyan, enhanced a sense of impending tragedy.

If “The Stepfather” is an oblique take on a narrative with origins in Greek tragedy, the production that followed is abstract drama with a vengeance. Rafael Bonachela has spoken of his desire to push the choreography to its conceptual limits, in which there could be no more appropriate collaborator than Scott Walker – whose albums “Tilt” (1995) and “The Drift” (2006) have each redefined what vocal-based composition can be. For this project, Walker has created a 25-minute instrumental score whose four sections are akin to a symphonic suite, scored for large ensemble with subtly-deployed electronic treatment. The outer sections, pulsing and fractured by turns, are effective foils to the pulverising aggression of the second section and plangent austerity of the third: music that, while it appears to draw upon aspects of the Polish avant-garde, is yet personal in its formal and expressive continuity.

The stage itself was divided by a diagonal white stripe, indicative of the tortuous angles and contours which the dancers inhabit as they variously carve up and slice through the visual space in this bleak assessment of the interaction between humans and machines. The full title should be borne in mind: “And who shall go to the ball? And what shall go to the ball?” Any overtones of Cinderella and ballrooms are obliterated by Torsten Neeland’s red and black-clad dancers as they search desperately for ways of connecting in an environment alien in spite (or because of?) their presence – to which Guy Hoare’s lighting, with effective use of strobes and blackout, was a not insignificant addition. Only the double basses of the London Sinfonietta, as directed by Mark Warman, appeared to be performing live at the rear of the stage, with the remainder relayed by loudspeakers to unsparing effect. Certainly the self-effacing figure at the mixing desk high up in the auditorium seemed well satisfied with the outcome.

An evening to remember, then, for its divergent but complementary ways of redefining just what the human body is or can be in situations of emotional and physical extremis. CandoCo will be touring this double-bill during the autumn and anyone who doubts what dancers in general, and disabled dancers in particular, can achieve should certainly attend. Enthralling, unnerving and inspiring in equal measure.