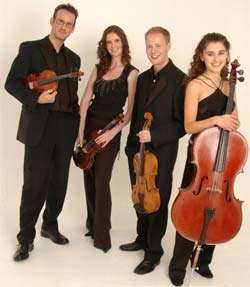 The Carducci Quartet’s residency at Cardiff University is proving highly rewarding, balancing contemporary works with mainstream repertoire in a way which suggests acute perceptions. The advertised programme for this concert only made mention of the Mozart and the Bliss, so it was particularly intriguing to find included with this relatively conventional pairing string quartets by Rebecca Clarke and the young Chinese-born Huang Ruo.

Clarke’s Poem – an Adagio movement dating from 1926 but unpublished until 2004 – has her characteristically fluent treatment of the quartet medium, with her own instrument – the viola – permitted a slightly more elaborate treatment of the melody in the otherwise highly democratic disposition of the main material. The tenor of the music is primarily wistful rather than deeply melancholic; depression was a factor in Clarke’s makeup. The Carducci Quartet handled well the gradual accretion of layers of intensity, not hugely complex but with each instrumental line carefully reinforcing the others, building to the turbulent high-point at the heart of the movement before subsiding to the almost ghostly final section. While the title may seem to allude to the sensibilities of Chausson, the inflections of Ravel are more definite, yet Clarke’s own voice is always discernible. Hearing this music played with such commitment, by musicians who are also young parents – Clarke felt motherhood effectively precluded being a composer – somehow underlined the poignant if not tragic thread of her career. Clarke’s apparent acceptance of its subservient role is often belied by the emotional force of the music.

Though separated by several decades, Clarke and Huang Ruo have in common the American connection. Clarke went to live there and would die in New York; Huang is now based in that city. His Second Quartet was commissioned by the Concert Artists’ Guild of New York on behalf of the Carducci Quartet, who had been winners of its 2007 competition, and who gave the work’s premiere in Weill Recital Hall (Carnegie Hall) in March 2009.

Entitled The Flag Project, the flags in question are the colourful Tibetan prayer-flags used to confer blessings on ridges and peaks in the Himalayas. In keeping with this theme, each string-player is also required to play a pair of Tibetan finger-cymbals. In the first movement, the audience was transfixed not just by the sparse string textures but by the tiny tinkling chimes of these cymbals, one struck gently against the other but then with the gestures carried through into circling and looping patterns in the air. This ritualistic element evoked its own rather wonderful atmosphere. In the second movement, the cymbals were bowed to equally extraordinary effect, lending an enigmatic quality to the string pizzicatos and glissandos which followed, with a single bowed cymbal note to end. The finale could not have been in greater contrast: a lot of heavily accented droning with fierce bowing on the strings strangely akin to the high-spirited frenzy of folk-fiddlers of Northern peoples, and with a general accumulation of buzzing energy. The piece was totally engaging and delivered with great sensitivity and then great panache by the Carducci Quartet.

For all the fascination of these two works, it was the Carducci Quartet’s partnership with oboist Nicholas Daniel which stood out in this concert. Their playing of Arthur Bliss’s Oboe Quintet was clearly guided by Daniel’s interpretative instinct: his full and rich tone a powerful foil for the string sounds, yet breathtaking in the sheer sweep of his phrasing and virtuosic passagework. This was a performance which revelled in Bliss’s glorious chromaticism and exotic melodic arabesques. The parodic nature of the Vivace finale with its variations on a genuine jig tune – realised with authentic flair by the Irish violist Eoin Schmidt-Martin – managed not to sound contrived, in turn allowing the flamboyant oboe cadenza to feel like the final flourish not just to this movement but to the whole work.

Daniel’s most exquisite playing though was heard in the opening work of the evening, Mozart’s Oboe Quartet. The central D minor arioso had a simply searing beauty, while the faster outer movements matched wonderful articulation with infinitely subtle gradation of dynamics. The Carducci Quartet was sympathetic to Daniel’s every move. This was a performance to remember.