“In this programme immediately preceding Armistice Day, the French pianist offers a thoughtful and varied collection of works written during the First World War by composers from the former combatant nations, including rarely heard pieces by Hindemith and Frank Bridge.” [Wigmore Hall website]

The scope of events, in any medium you care to mention, marking the Armistice Centenary takes your breath away, and Wigmore Hall contributed with Cédric Tiberghien’s exceptional recital of music composed during the years of World War One, by composers from Britain, France, Germany and Poland. 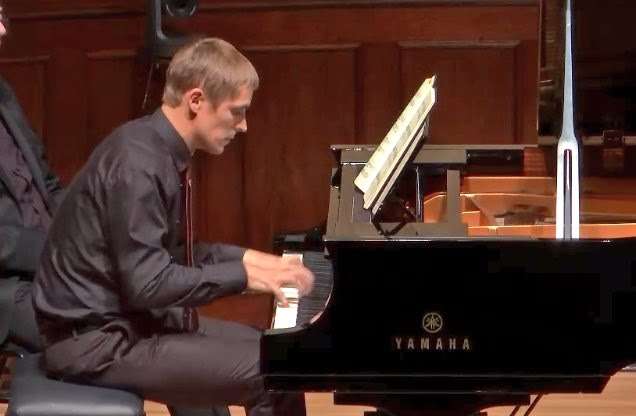 The way the evening was constructed made the works seem to gather like moths to the flame of Debussy’s twelve Etudes. Debussy died in 1918, and the Etudes were his last major work – Messiaen, who appreciated their stature, was to play a crucial role in saving them from neglect. In the context of Tiberghien’s programming and playing, they came across like a parallel world of perfection, providing a way out of the period’s cultural upheaval and wartime trauma. Studies VII, VIII & IX preceded the Szymanowski set, then X, XI & XII, and, following the interval, Book I.

The recital was bookended by two wildly fantastic pieces, Scriabin’s Vers la flamme and Hindemith’s equally overwrought sequence of fourteen pieces, In einer Nacht… Träume und Erlebnisse (1917-19), loosely translated as ‘Dreams and adventures of one night’. Tiberghien is a pianist who can convince me that Scriabin isn’t only like Wagner getting dressed in the dark, and the composer’s vision of a cleansing immolation of humanity, prophetic in a way he didn’t intend, is full of performance directions such as avec joie tumultueuse and éclatant, lumineux and even fuller of his signature chromaticism, ecstatic or clotted depending on your point of view. Tiberghien was suitably incandescent, and his mighty Yamaha piano had the power and brightness for quite a conflagration.

In one of his many and fitfully audible announcements from the platform, Tiberghien said the Hindemith was a discovery for him, as it was, I imagine, for many in the audience. In einer Nacht… initially sounded cautious but quickly heated up into an animated, expressionist parade, a Kinderszenen for grown-ups while referencing the delirium of Schoenberg’s Pierrot Lunaire, written only five years earlier. The short pieces have titles such as ‘Tirednesses’, ‘Fantastic dialogue of two trees in front of the window’ and ‘Cries in the eavesdropping night’, there are parodies of Humperdinck and Verdi, and the sequence ends with a muscular Foxtrot and a colossal double fugue, both of which Tiberghien drove mercilessly and, in the fugue, challenging the piano to go ever louder – and there were no problems in that department.

We got more of an idea of the delicacy and elegance of Tiberghien’s playing from Frank Bridge’s Three Improvisations for the Left-Hand (1918), eloquent sketches entitled ‘At dawn’, ‘A vigil’ and ‘A revel’ – written for Douglas Fox who lost his right-arm in action – that convey reticent and very mixed messages. Tiberghien can make the mechanics of his playing look and sound natural and unflustered, but Szymanowski’s Twelve Etudes positively flaunt their angular virtuosity. Tiberghien occasionally nodded to the veiled charm of Chopin, but the overall impression was of knotty concentration, with each piece delivering a crisis or a climax – you’re never quite sure which. Tiberghien’s high-voltage attack and precision were never in doubt.

He conveyed a powerful sense of the programme’s disparate styles and directions being resolved by the Debussy Etudes that anchored the whole evening. Some pianists prefer a more cerebral approach to these wonderful unions of style, form and content. Tiberghien certainly doesn’t spare on the music’s abstract delights, but they arrive with irresistible warmth, vigour and the sort of insight that comes with a deep identification with the music on the back of a stupendous technique. They sounded unencumbered by agenda, shaped by the tensile strength and imagination of Tiberghien’s playing. The recital, which he played all from copy (with a living, unflappable page-turner rather than an iPad), was being live-streamed by Wigmore Hall and remains available, and apart from accessing works that you might wait a long time to hear again live, the film gives you an astonishing view of Tiberghien’s superb, understated virtuosity and of the unimpeded directness of his performing style. He rounded off a long evening in the United States with George Gershwin, some ragtime composed during World War One, Rialto Ripples.