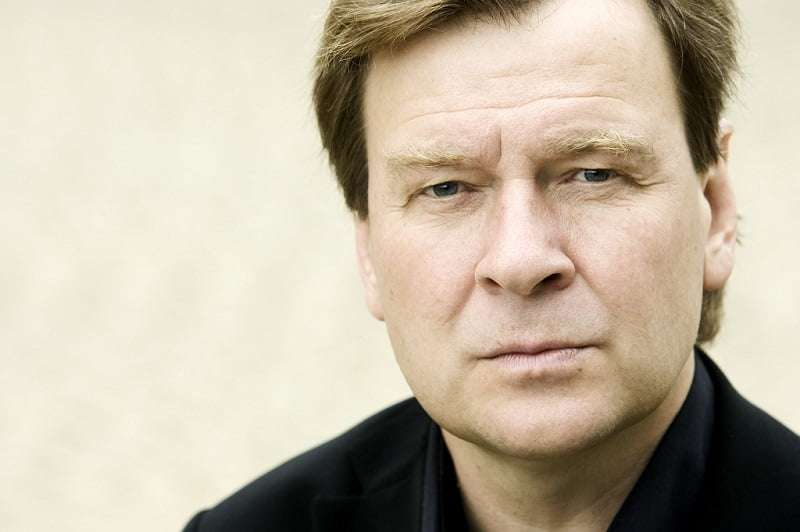 On the eve of the Armistice Centenary, Vladimir Jurowski and the LPO opened this considered concert with Debussy, his Berceuse héroïque (1915), an orchestration and expansion of a piano piece he wrote “to pay homage to H. M. King Albert I of Belgium and his soldiers”. It’s a slow march, elegiac, veiled, the dead remembered with eloquence and trumpet memorials, and much sensitivity from the London Phil musicians.

Then the premiere of Magnus Lindberg’s Triumf att finnas till… (Triumph to Exist…) setting words by Edith Södergran (1892-1923), the title poem written in 1916 being a “meditation on the transience of life [and] defiantly positive of the joy of existence” [Lindberg], both artists Swedish-speaking Finns. At the outset the music is powerfully suggestive and universal in expression, community-based, and anyone feeling that the programme lacked a representative British composer (such as George Butterworth, killed in action at the Battle of the Somme) might have taken comfort from some of the choral writing being reminiscent of Holst and Vaughan Williams – and, closer to Lindberg’s own home, the male contingent conjured Sibelius’s Kullervo – although there are enough curlicues in the orchestra to determine this music as Lindberg’s, even if some of the bright-percussion touches became questionable. Of greater doubt is the work’s length, for the final ten minutes of the thirty (longer than anticipated) rather fell into a rut and this listener’s interest waned, almost as if Lindberg’s stated desire to set every syllable of Södergran’s seven wartime poems had defeated his musical inspiration. The composer was present and this first-performance was exacting, the London Philharmonic Choir outstanding, both evocatively and linguistically.

The LPC then became Latin scholars for Stravinsky’s Requiem Canticles (1966), more or less his final work and also a perfect example of ‘less is more’ (nine movements totalling fifteen minutes), music written with economy in terms of notes used and orchestration (Webern an influence), so four flutes seems extravagant. If the writing is severe and angular if rhythmically arresting in the ‘Prelude’, there is something utterly compelling to latch onto throughout, not least solo and tutti voices from the chorus underscored by horns and magically coloured by the mingled chimes of piano, harp, celesta, vibraphone and tubular bells in the ‘Libera me’. As neither had much to do, Angharad Lyddon and Maxim Mikhailov were placed to the back of the orchestra, but both rose to the occasion, especially the florid bass, and Jurowski avoided any inflation of what is on the page.

Good concert this for adventurous programming and excellence of performance, and, like Stravinsky (at any time of his long career), Janáček is also inimitable, if not consistently so during The Eternal Gospel (1914/17), although leader Pieter Schoeman gave a charismatic cameo of the recent The Fiddler’s Child and there is no doubt that this is the composer of such pending scores as Taras Bulba and Glagolitic Mass. Only now was the LPO sporting eight double basses, and Catherine Edwards moved from piano to the RFH organ (a bit subdued though). Janáček packs much into twenty-odd minutes, from rapt reflection to impassioned crescendos, complemented by trademark trombone incursions, piccolo screams and hard-edged timpani, setting a legend that here featured Andrea Danková as a yearning operatic heroine (in fact an Angel) and the quite marvellous Vsevolod Grivnov, an ardent and accurate tenor as Joachim of Fiore. The cantata’s final words are: “The kingdom of eternal love is dawning!”, and it will come as no surprise to learn that the LP Choir transferred with alacrity from strict Stravinsky to fervent Janáček.

With another enterprising evening recently gone, featuring the Borodin Quartet, and both concerts recorded, one imagines that some suitably coupled LPO CDs will soon be ours for the taking.