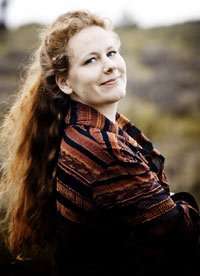 A former member of the BBC’s New Generation Artists scheme, Christianne Stotijn has come a long way in a short time. For a singer with such little depth of experience she cut an assured and authoritative figure on the platform during this concert, establishing an ingratiating rapport with her audience and sharing a partnership of equals with Julius Drake.

Stotijn’s programme was well-designed. Groups of Grieg and Schumann songs, each containing a well-known piece but otherwise covering a wide range of character and feeling, were balanced by an in-depth examination of Richard Strauss’s achievement in the Lied during his main song-writing period (1887 to 1901), arranged in chronological order.

Singer and pianist launched their programme energetically with the first song, a setting of Heine’s “Gruss”, Drake enacting the sound of joyously pealing bells, Stotijn wanting to share her rapture with the whole world with the wide-ranging phrases easily encompassed. The contrasting second song, to a poem by Geibel about escaping posthumously the emotional peaks and troughs of life, allowed Stotijn to display the body to her tone and her concern for the meaning of words: she articulated with due weight the masculine endings which are the main carriers of meaning in the song. Uhland’s “Lauf der Welt” is a refreshingly flippant account of a couple’s love, sprinkled with chuckles in both singer’s and pianist’s parts, while in “Zur Rosenzeit” the pianist maintains a heavy, baleful presence throughout; confounding the poet’s hopes of love surviving; here Stotijn used her secret weapon, an exceptional low register which maintained volume and beauty and never hinted at freakishness.

The familiar song in this group was the last “Ein Traum”. The joint interpretation was persuasive and thoughtful, with a patient, unhurried start to the great crescendo with which the song ends, but the effect was partly vitiated by flatness on some of the upward intervals and a tendency for the tone to flutter from D upwards.

The second Grieg group comprised settings of Hans Christian Andersen, In “En Digters Bryst” Drake powerfully brought out the way in which the poet’s creativity boils up from inside, while the singer enacted the depth of inspiration, ending the song with her eloquent lower register. Similarly, she concluded “Min Tanke er et maegtigt” well below the stave, while her partner offered antithetically a depiction of the height and force of a steep mountain range. The enhanced concentration of the audience as the performers began the sublime “Jeg elsker dig” was palpable. The melody rolled out with simple rapture, to be repeated softly and diffidently, to moving effect.

The Danish writer was also represented by the next group, this time translated into German by Chamisso. Schumann’s musical imagination was more adventurous than Grieg’s and in these songs he presents opportunities for both pianist and singer as story-tellers. In several of them, Stotijn had to deliver an agonising conclusion. She proved herself to be a vivid narrator, conveying the macabre fate foreseen for the child in “Muttertraum”, the awful finality of the shot to the heart in the Mahlerian “Der Soldat” and the manic melancholy of the violinist forced to play at the wedding of the woman he loves to another in “Der Spielmann”. The quaver counterpoint in the first of these and the painting of the sound-picture as the firing-squad march to and carry out their duty in the second brought a strong response from Julius Drake. In addition he has, as so often in Schumann, extended postludes to assert his insight. He responded epigrammatically in “Märzveilchen”, gravely in other songs.The last song “Verratene Liebe” brings this Opus 40 set to an endearing conclusion. A light-hearted treatment of a secret love which becomes public, the singer’s closing smile was seconded by the pianist, who was on his feet and stepping forward to join her in joint celebration almost as soon as he had sounded the last chord.

The pair were up and at ‘em again to start the second half, diving into an “All mein’ Gedanken” which was a trifle arch but clear of over-sophistication. The coupling of consistency with variety which had been so rewarding in the first half continued after the interval. The sustained phrases of “Befreit”, that precursor of the valedictory tone of the “Four Last Songs”, were balanced by the restless line of “Ich schwebe”. The former could hardly have received a better ending, with a formidable control of crescendo. “Am Ufer” demands a voice even throughout a wide range. The soft high leap at the conclusion was all the better for being covered; elsewhere an open production in the upper register led to a recurrence of that bubbly sound and a harsh edge to the tone noticed in the first half.

The demands of the songs became greater as the programme reached its end. Variations of colour worthy of a singer of much greater experience were undertaken. “Waldseligkeit” displayed an impressive command of breath control and several convincingly accomplished changes of dynamic. “In goldener Fülle” brought the evening round full-circle, with its dactylic rhythms restoring the opening vitality – and leaving the last word to the piano.

Stimulating programme planning made this a singularly satisfying recital. Stotijn was right to showcase the qualities of her low register. Some work is needed on the upper range if she is going to tackle the lyric mezzo repertoire in opera and enlarge the impact of her recital work. I hope to hear her and Drake in increasingly enterprising repertoire in future years.