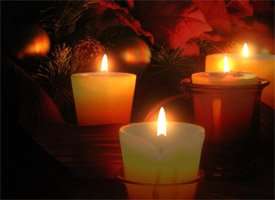 Birmingham-based and with an international reputation, Ex Cathedra seldom lacks for enterprise: not least in its seasonal concerts, of which this one formed part of the twenty-fifth Annual Christmas Festival at St John’s – its spacious yet intimate acoustic being a singularly appropriate setting for such music.

The programme (unfolding over two halves of around 50 minutes each) brought together the familiar and the unusual in a sequence of productive contrasts: the musical items grouped in twos or threes, then interspersed with a variety of readings – ranging from the King James Bible, via George Herbert and John Henry Newman, to Jeanette Winterson and Tim Minchin – that themselves threw an arresting light on the meaning of Christmas. What resulted was less an alternative ‘lessons and carols’ than a continuum of words and music to make one think anew on this most hallowed yet tarnished of events.

After Edward Bairstow’s anthem “Let all mortal flesh keep silence” as a solemn processional, the first half continued with the mellifluous seventeenth-century French traditional “La ballade de Jésus Christ”, followed by Alec Roth’s evocative “Sol justitiae” and Benjamin Britten’s ‘This little babe’ (as featured in “A Ceremony of Carols”, Frances Kelly the harpist). Samuel Barber’s arrangement of his ubiquitous Adagio for Strings as “Agnus Dei” was a pertinent choice in his centenary, sounding unexpectedly urgent here; an admirable foil for David Willcocks’s timeless arrangement of William Kirkpatrick’s “Away in a manger”; followed by the rapt ecstasy of Morten Lauridsen’s “O magnum mysterium” and the plaintive Austrian carol “Stille, Stille, Stille”. Ralph Vaughan Williams’s forthright version of “This is the truth” found appropriate contrast with John Byrt’s thoughtful “All and some”, then the first half closed with a trio of Southern European numbers: Joseph Canteloube’s ‘Báïllero’ (from “Songs of the Auvergne”) sounded newly-minted with its antiphonal solos for shepherd and shepherdess, then Pierre Attaingnant’s rumbustious “Tourduin” prepared for Juan García de Zéspedes’s “Convidando esta la noche” – Spanish polyphony and Latin panache in energetic accord.

After the plaintive and affecting “Wexford Carol”, the second half continued with James MacMillan’s virtuosic “And, lo, the angel of the lord came upon them” (written for this choir’s fortieth anniversary last year), then Britten’s ‘Hodie – Wolcum Yole!’ (with Frances Kelly) was followed by Joaquin Rodrigo’s appealing “Pastorcito santo” (one of his numerous under-explored choral pieces) and Jan Sweelinck’s intricate “Hodie Christus natus est”. John Joubert’s “There is no rose” was a welcome inclusion from a composer whom this choir has long championed (above all its premiere of his “St John Passion” some years ago), while the fervent decrescendo that is Henryk Górecki’s “Totus tuus” made for a timely inclusion given his recent demise. Franz Gruber’s “Stille Nacht” rarely, if ever, fails to move through its chaste simplicity, with Barber’s “Twelfth Night” a reminder that the composer was no less adept at writing for voices as for instruments. Roth’s “Child of son” proved hardly less resourceful, as did the touching adaptation of a Bach chorale that is “How shall I fitly meet thee?”. The second half closed with “O Come All Ye Faithful” – in which the audience joined with the choir, albeit a little tardily.

Throughout the evening, effective use was made of the spatial possibilities of St John’s – not least the distancing potential of its gallery – while candlelight added considerably to the atmosphere. The only caveat might be the insufficient pause between certain pieces, as also between certain readings and musical items, but this hardly detracted from the potency overall. Jeffrey Skidmore led, as he always has done, from the front; his arrangement of “Auld Lang Syne” made for a rousing encore, while that of “We Wish You a Merry Christmas” sent everyone home reinvigorated for the festivities ahead.