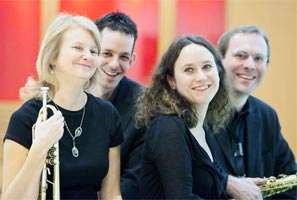 For its Kings Place concert earlier this year, Counterpoise presented the medium of the melodrama – essentially speech set against music – with an ambitious programme of contemporary pieces involving film. This second concert, again devised by Barry Millington, the Wagner scholar and chief music critic of the Evening Standard, wasn’t so elaborate technically, but, with its focus on David Matthews’s music, was just as involving.

Composer-brother of Colin, David Matthews acknowledges influences from the late romantics and Mahler to Britten and Tippett – Aldeburgh played a strong part in his development – and his music has a clarity of organisation and robust lyricism that is immediately attractive. His new (2010) piece Actaeon, played against a projected image of Titian’s wonderfully erotic Diana and Actaeon, requires a narrator reading Ted Hughes’s translation of Ovid’s story of the hunter Actaeon discovering the goddess Diana bathing naked. The poor man’s punishment is to be transformed into a stag and then hunted to his violent death by his own hounds and unsuspecting friends.

There is a slight danger with speech set over music that the latter can be perceived to imitate the content of the words, sometimes to unintentionally amusing effect. There was no risk of that here; the music – powerful, evocative, ferocious and tender, with a marvellous passage conjuring Actaeon’s baffled realisation of his transformation – and narration vividly winding round each other to stunning and complementary effect. The speech amplification was a bit overwhelming, but Eleanor Bron did Hughes’s swaggering text proud. Adonis, a short three-movement piece for violin and piano, played against a projection of Titian’s Venus and Adonis, is another Ovid setting, but without narration, and its dark, almost Brahmsian lyricism had an aura of high romance, capped by a rhapsodic coda of great beauty.

The Mark-Anthony Turnage piece, for alto sax and piano, is very clearly jazz-influenced, with the second elegy a poignant lament for the composer’s brother, hauntingly played by Kyle Horch.