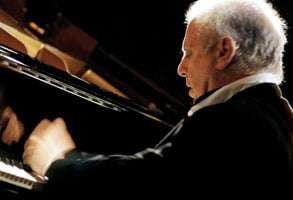 In 1967 the 25-year old Daniel Barenboim gave a complete cycle of Beethoven’s piano sonatas in London. Now, just over forty years on – with three complete recordings (made originally for the main formats – LP, CD and DVD) behind him – it is now something of a rarity to see Barenboim addressing a piano, still more so in such a concentrated span of works.

A most pleasing programme marked this the first of eight recitals (finishing on 17 February) in which Barenboim essays all 32 of Beethoven’s piano sonatas. This first concert embraced Beethoven’s first published work in the form and his most substantial, the ‘Hammerklavier’.

Barenboim began with a taut, slightly agitated account of the F minor work, but soon set down values of graceful restraint, economical use of the sustaining pedal and thoughtfulness that placed each part of the music in its proper context. So it was that an airy slow movement had a daring lack of volume, yet continued to project into the large Hall, the audience, for once, responding mostly in silence. The Minuet, too, was gentle yet with its stately manner preserved, and if the trio was slightly muffled at the beginning it grew on a natural crescendo of sixths, with Barenboim electing not to exploit the Haydnesque wit of the final cadence and its anticipation. The finale unleashed a considerable amount of energy, Barenboim in full control.

There followed an affectionate reading of the E flat Sonata. The first movement’s contrast of repose and momentum was beautifully conveyed by Barenboim, soft chords complemented by the slightly frivolous response. The left-hand figurations were extremely well defined, as they were in the scherzo, where Barenboim’s feet also jabbed out the staccato rhythms in between touches of fortissimo grandeur. 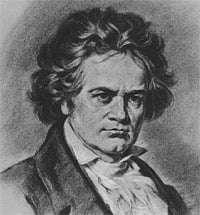 This sonata finds Beethoven exploring further harmonic reaches – not for the first time – and Barenboim stressed these, particularly in the finale, where the rhythms became deliberately less defined as the tonality strayed ever further from the home key. In the preceding Minuet this was manifested by the obdurate and rather disquieting ‘C flat’, continually muscling in on the rather more comfortable music elsewhere.

With ‘early’ and ‘middle’ periods covered in terms of the sonata output, it was time for ‘late’, and a performance of the ‘Hammerklavier’ putting into practice the principles detailed in the concert’s first half. Barenboim’s careful attention to colour and detail and a captivating sense of drama in the first movement were spoilt by the omission of the first-movement exposition repeat, so that while the piercing fugal passage made considerable impact it did so in a lopsided structural context. The brief scherzo revealed flashes of humour to go with the exquisitely soft playing in the minor key, which were initially chilling until opening out in extrovert finish, Barenboim unusually applying more sustaining pedal along the way.

It was the timeless slow movement that held the heart of the performance, notable for the stillness both in the music and in the audience, save for the extraordinary sound of a baby crying near the end! Barenboim brought an unpretentious grandeur to the finale, revealing its origins in far earlier music but applying poignant embellishments when the theme returned. A concentrated passage following this heightened the sense of gathering momentum as the Fugue approached and was finally revealed. In this, Barenboim retained a strong sense of clarity throughout, even in the massive and so-taxing double trills, and toward the end of the contrapuntal exposition he became ever more animated. The end, in quadruple octaves, was thoroughly convincing.

The society’s Chairman, Graham Sheffield, then presented Barenboim with the Royal Philharmonic Society’s Gold Medal. Barenboim becomes only the ninety-seventh recipient of the Medal in its 137 years of existence. He received the Medal with a graciousness that had been evident throughout the evening and accepted it on behalf of the West-Eastern Divan Orchestra.

Meanwhile, the rewards in this concert suggest that many fine things lie ahead in this Beethoven series.