David Lang’s ‘prisoner of the state’ is a “meditation” on Beethoven’s Fidelio, part-opera and part-oratorio. The work was premiered in New York last June, and Barbican Centre’s Hall was filled with expectant celebrities from the musical and media world for its first European performance. 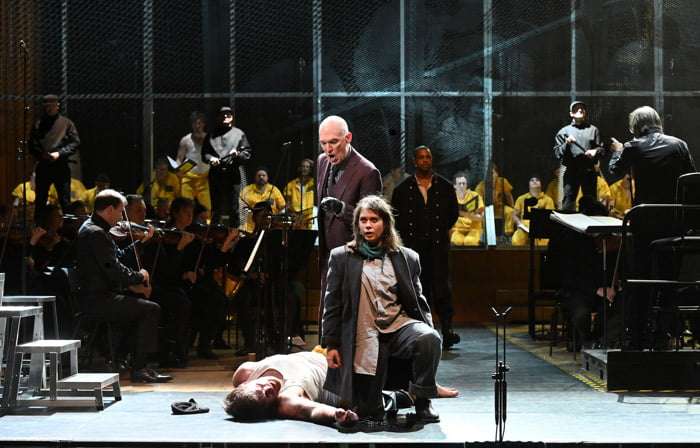 Using Beethoven’s opera as a “skeleton” Lang employs a large and traditional orchestra, supplemented by additional percussion. His musical language is deceptively simple and resonant. Described as “neo-plainchant”, its repetitions are framed around lyrical vocal lines over cross-driven instrumentals and heartbeat ostinatos. There is no overture and the piece begins with the Assistant’s (Leonore) reflections on the alienation she has felt since she has worked at the prison, in search of her husband. ‘I was a woman once’ conveys this loss of identity in Lang’s trademark pared down vocal style, immaculately sung by Julie Mathevet. The male prisoner’s chorus echoes the sentiment of detached powerlessness, culminating in a list of crimes given with driving force and stirring rhythm, the drama heightened by alternating accompanied and unaccompanied voices.

The presence of the Jailer, persuasive bass-baritone Davóne Tines, is announced by textured percussive strings, a recitative device used effectively throughout. The Jailer’s motivation is money, used to acquire power and love and Tines’s duet with Mathevet outlines a central argument of the piece. The Assistant is desperate to get access to the Prisoner and the Governor’s arrival provides the excuse, as he wants to kill the Prisoner before the Inspectors arrive.

Alan Oke’s powerful dramatic presence and clear, menacing tenor embodies the threat to freedom or life, and the paradox that only by murdering the prisoner will he feel free. The trio between Tines, Oke and Mathevet’s soaring soprano is supremely moving and leads to Oke’s defining aria ‘It is better to be feared than to be loved’, the words taken from Machiavelli. Lang layers texts and ideas about freedom and imprisonment from throughout the centuries to create a moving and timeless musical commentary.

As the focus shifts to the Prisoner, trapped almost out of sight of the audience, ghostly projections of his face appear on the cage at the back of the stage, behind which the prisoner’s chorus stand. Jarrett Ott’s honeyed baritone is compelling, and there is a heroic, Bernsteinian edge to his first aria/number. ‘We are born free’ continues ‘but everywhere we are in chains… in here you see the chains’. Spectral strings accompany a dream of his wife. When their hands meet through the bars, they do not know each other and the Assistant gives the Prisoner (sacramental) bread and wine. She offers to accompany him on his death journey. Their duet ‘In a better world’ is made transcendent by their love, but it is echoed with irony and ambiguity by the Governor in the final key aria ‘No one man is ever safe or free’ by Oke, accompanied by melancholy cello solo. Trumpets announce the arrival of the Inspectors and salvation; brass, strings, soloists and chorus combine into an expansive finale asking more questions, the same questions. ‘When will we be free’? Glorious and appropriate echoes musically and thematically here, of Tippett’s orchestral and choral writing for ‘A Child of our Time’.

Volkov and the BBC Symphony Orchestra gave a faultless, taut and moving performance, and the purity of the soloists’ voices complemented the unadorned nature of Lang’s writing. Dramatically, the first two thirds of the piece built musically and theatrically, but the denouement was slightly ungainly with the attempted murder not clearly resolved before the final climax. All in all, an absorbing and thought provoking evening, with music at times of ravishing beauty.