For the first time in over a decade, Gustavo Dudamel came to conduct the New York Philharmonic, for this well-curated program, the first of two scheduled for his two week-visit to Lincoln Center. The evening’s lineup revealed an obvious ‘New World’ theme, sandwiching the New York premiere of Esteban Benzecry’s blistering Universos infinitos, between two concert hall favorites with North American connections. 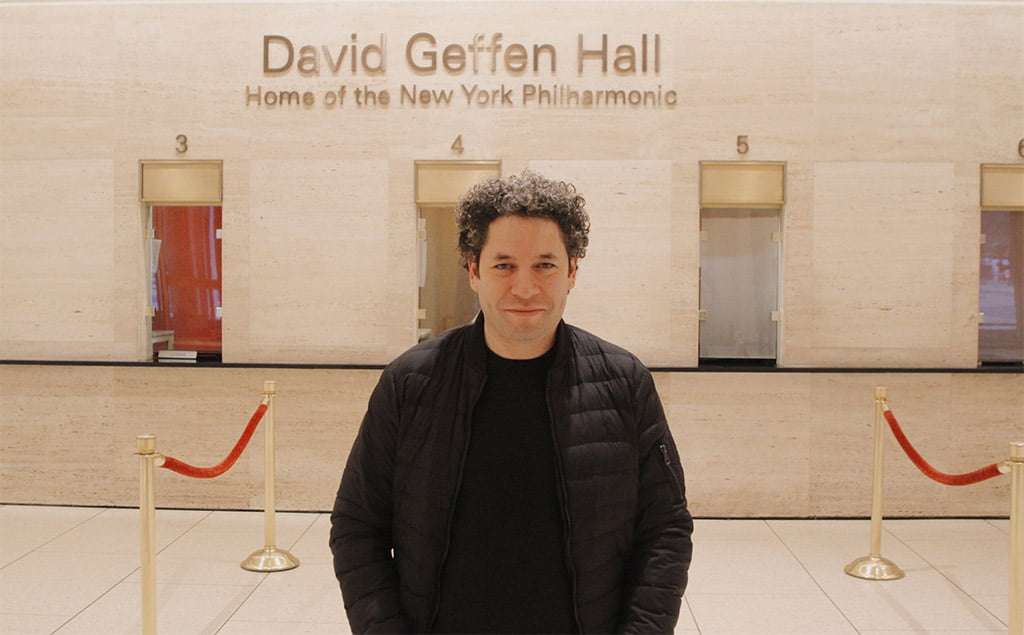 The evening began with a dramatically hushed account of Charles Ives’s The Unanswered Question. The work is scored for three groups, playing in independent tempos: four flutes, a solo trumpet and a string ensemble. On this occasion, the trumpet and woodwinds played offstage, their exquisite sounds seeming to come from a far-off ethereal world, while the onstage strings maintained their serene and slowly shifting diatonic progression. Everything was soft, clear, and beautifully rendered.

Benzecry’s Universos infinitos came next. Composed in 2011, but premiered only last October in Los Angeles, the dynamic and vibrantly colored half-hour piano concerto is cast in three movements. Like the Ives, it explores cosmic themes, evoking them via spiritual and musical connections to the indigenous peoples of South America. As the Argentine composer explains in a program note, the title refers to “humans and their connections with their internal and external universes, in a world before our civilization, where times were governed by planetary and agricultural cycles.”

The mostly restless piece is a bravura challenge for the pianist. ‘Un mundo interior’ (An interior world), the opening movement, starts with a fanfare that evolves into a rapid-fire moto perpetuo, with the piano pounding out its four-note theme in a constantly changing series of chords and rhythms, only occasionally pulling back into more peaceful murmurings. The soloist, the young and fearless Sergio Tiempo, dispatched the virtuosic demands of the part with remarkable ease. In the mystical, dream-like slow movement, ‘Ñuque Cuyen’ (Mother Moon), he played the flowing solo lines with great delicacy and tenderness. In the whirlwind-paced closing toccata, ‘Willka Kuti’’ (Return of the Sun), his furiously energetic playing most effectively depicted the dance rhythms of the Ayamará and Guaraní ethnic groups gathering to celebrate the start of a new agricultural cycle, while the tumult of activity throughout the orchestra mirrored the peoples’ chaotically festive mood.

But in the end it was the insightful and exuberant performance of the ‘New World’ Symphony on the second half of the program that proved to be the highlight of the evening. In Dudamel’s hands, Dvořák’s beloved and frequently programmed score came across as surprisingly fresh, bold and exhilarating. The first movement was especially well-shaped: as the slow introduction moved into the highly spirited yet agitated mood of the main Allegro section, the music became increasingly engrossing. The well-known ‘Goin’ Home’ melody of the Largo – first heard on Ryan Roberts’s splendid English horn – conveyed a wonderfully poignant sense of longing. The scherzo was full of drive in the more propulsive sections, yet appropriately graceful in the lighter passages. The powerful playing in the finale was full of heroic grandeur. This was a performance that brought new life to Dvořák’s most popular creation.