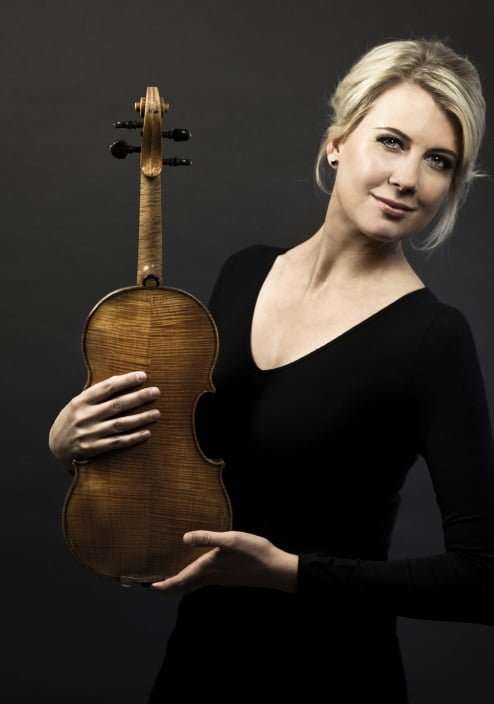 This latest free and live webcast from the Detroit Symphony Orchestra to the World began at 3 o’clock locally and opened with three sailors on shore-leave in New York. The result is a Bernstein belter (On the Town is a 1944 stage musical and then a film, the latter with Frank Sinatra, Gene Kelly and Jules Munshin) – raunchy, punchy, sentimental, atmospheric and hot-jazzy. Suffice to say that another Leonard, Slatkin, and his Detroiters can swing and smooch with the best of them; the “Big Apple” was here painted red.

Talking of red, up next was John Corigliano’s Violin Concerto, emanating from his score for François Giraud’s 1998 film The Red Violin, “about the 300-year history of an accursed violin from 17th-century Italy to late 20th-century Montreal and the lives of the people who encounter it.” Corigliano (born 1938) has his personal connections to New York and the violin; his father, also John, was a long-serving concertmaster of the Philharmonic.

Of the 35-minute Concerto’s four movements, the opening, large-scale ‘Chaconne’ is a powerful utterance, with Baroque imprints, romantic lyricism and a volatility that brings pace, force and violent interruptions, and, just as easily, something icy and eerie, and then becoming tumultuous. Somehow such shocking juxtapositions work both as a concert piece and, even without knowing the music’s origins, as something filmic. The second movement is a scherzo, surreptitious, spectral and spooky, quietly leaving its mysterious mark. The Andante flautando (“flute-like”) that follows is intensely lyrical, sweet too … and without pause arrives the beginning-scratchy finale, which seems to be a race against time, leavened with a very touching poeticism that is peculiarly American, and as elsewhere had me thinking of Samuel Barber’s Violin Concerto. Here and at other moments, some effects and sounds are maybe lost on the ear without knowing or seeing the film.

Elina Vähälä (born in the USA but from Finland), who I have not heard before, performed Corigliano’s Concerto with wonderfully musical commitment backed by sure-fire technique and grades of tone to suit every occasion; she can do rich, she can do wispy, and surveys all the land in between. ‘Red Violin’ was written for Joshua Bell – he now has competition.

After the interval, two more substantial pieces, similarly hard-worked-on in rehearsal. Grohg is from the pen of Aaron Copland, something of an enfant terrible in his early-twenties, at no time here pointing to his ‘popular’ pieces (Billy the Kid, Rodeo, Appalachian Spring) or the stirringly patriotic (by which I mean Symphony 3, which self-quotes from Fanfare for the Common Man). As Copland himself reminisced: “One evening in the fall of 1922 we went to see the popular German horror film Nosferatu. It was about a vampire magician with the power to make corpses come to life…by the time we reached home that night I decided that this bizarre tale would be the basis for my ballet.”

Musically, Grohg (a ‘he’, and adapted from Bram Stoker’s Dracula) is garish and threatening, hard-hitting, moody and even a bit Balinese in its sounds. It is quite brilliant (even addictive) and vividly image-creating. Strikingly inventive – ranging from rowdy to darkly seductive, fantastical all round and climactically charismatic – it could not have been better served by Slatkin and the DSO; if it’s this account (the third of three) that makes it out as Naxos’s release, I won’t be surprised.

Finally, Robert Russell Bennett’s superb Symphonic Picture of the Gershwins’ opera Porgy and Bess (1942, composer George having passed away a few years previously), arranged for Fritz Reiner and re-scored by Bennett in Technicolor – sentimental, scintillating and stormy by turns, and including such hits as ‘Summertime’ and ‘I got plenty o’ nuttin’’ (in which a banjo is to the fore) and ‘Bess, you is my woman now’, it all worked a treat here in this sympathetic and sophisticated Detroit outing, one with a big heart and a generous spirit. Or, if you disagree, ‘It ain’t necessarily so’…