Skip to content
LnRiLWNvbnRhaW5lcltkYXRhLXRvb2xzZXQtYmxvY2tzLWNvbnRhaW5lcj0iNmIzNDMzNmNmZTc3NWZiNGJlMTVjMmIwMzU3NWM1MjYiXSB7IHBhZGRpbmc6IDI1cHg7Ym94LXNoYWRvdzogNXB4IDVweCAxMHB4IDAgcmdiYSggMCwgMCwgMCwgMC41ICk7Ym9yZGVyOiAycHggZG90dGVkIHJnYmEoIDEwOSwgMTA4LCAxMDgsIDEgKTsgfSAudGItZmllbGRbZGF0YS10b29sc2V0LWJsb2Nrcy1maWVsZD0iODM3Y2ExZjc0MGRjZDdkOTdlMzQzOWMyYjIwMWZmZTMiXSB7IGJhY2tncm91bmQtY29sb3I6IHJnYmEoIDIzOCwgMjM4LCAyMzgsIDEgKTtwYWRkaW5nLXRvcDogMTBweDtwYWRkaW5nLWJvdHRvbTogMTBweDtwYWRkaW5nLWxlZnQ6IDEwcHg7IH0g
LnRiLWNvbnRhaW5lcltkYXRhLXRvb2xzZXQtYmxvY2tzLWNvbnRhaW5lcj0iNmIzNDMzNmNmZTc3NWZiNGJlMTVjMmIwMzU3NWM1MjYiXSB7IHBhZGRpbmc6IDI1cHg7Ym94LXNoYWRvdzogNXB4IDVweCAxMHB4IDAgcmdiYSggMCwgMCwgMCwgMC41ICk7Ym9yZGVyOiAycHggZG90dGVkIHJnYmEoIDEwOSwgMTA4LCAxMDgsIDEgKTsgfSAudGItZmllbGRbZGF0YS10b29sc2V0LWJsb2Nrcy1maWVsZD0iODM3Y2ExZjc0MGRjZDdkOTdlMzQzOWMyYjIwMWZmZTMiXSB7IGJhY2tncm91bmQtY29sb3I6IHJnYmEoIDIzOCwgMjM4LCAyMzgsIDEgKTtwYWRkaW5nLXRvcDogMTBweDtwYWRkaW5nLWJvdHRvbTogMTBweDtwYWRkaW5nLWxlZnQ6IDEwcHg7IH0g
John Williams
Liberty Fanfare
Pops on the March
Concerto for Oboe and String Orchestra
A selection of film music, including Jaws, Memoirs of a Geisha, Harry Potter, and Raiders of the Lost Ark
LnRiLWNvbnRhaW5lcltkYXRhLXRvb2xzZXQtYmxvY2tzLWNvbnRhaW5lcj0iNmIzNDMzNmNmZTc3NWZiNGJlMTVjMmIwMzU3NWM1MjYiXSB7IHBhZGRpbmc6IDI1cHg7Ym94LXNoYWRvdzogNXB4IDVweCAxMHB4IDAgcmdiYSggMCwgMCwgMCwgMC41ICk7Ym9yZGVyOiAycHggZG90dGVkIHJnYmEoIDEwOSwgMTA4LCAxMDgsIDEgKTsgfSAudGItZmllbGRbZGF0YS10b29sc2V0LWJsb2Nrcy1maWVsZD0iODM3Y2ExZjc0MGRjZDdkOTdlMzQzOWMyYjIwMWZmZTMiXSB7IGJhY2tncm91bmQtY29sb3I6IHJnYmEoIDIzOCwgMjM4LCAyMzgsIDEgKTtwYWRkaW5nLXRvcDogMTBweDtwYWRkaW5nLWJvdHRvbTogMTBweDtwYWRkaW5nLWxlZnQ6IDEwcHg7IH0g 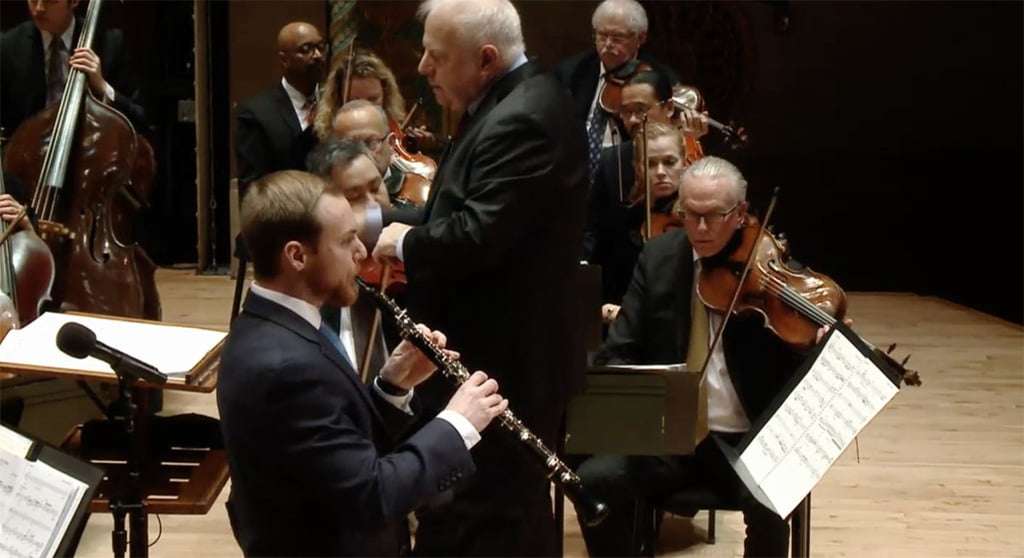 Danger lurks below, the celebrated two-note ostinato gives ominous warning of something fishy; why, it’s Jaws, your not-so-friendly neighbourhood shark, released into the water by Steven Spielberg during 1975 and given a customised soundtrack by John Towner Williams, just one of the cinematic courses served up here by the DSO and laureate chef Leonard Slatkin in this the second instalment of American Panorama.

It wasn’t all about the picture house, the composer matching music to image, for we started with a selection of John Williams’s concert-hall creations, Liberty Fanfare, more substantial in content and length than the title might suggest, brassy and stirring in its opening measures, then a bell tolls, and, following a few bars of sombreness, the music takes off, with roulades of notes, and trios to an uplifting melody, sumptuously sounded and animatedly decorated, music that speaks directly but without talking down. Similarly, Pops on the March – Pops being the Boston orchestra, the piece incorporating an onomatopoeic Arthur Fiedler motif and quotations from Sousa’s Stars and Stripes – and certainly marching along if with enough rhythmic twists and turns to defeat the foot-tapper. And a foot-note: although Pops on the March is no doubt inimitable (and very enjoyable) Williams, it could have equally been composed by Malcolm Arnold.

Of his numerous Concertos, Williams’s for Oboe was written in 2011 for Keisuke Wakao of Boston Symphony fame. Of its three movements, ‘Prelude’ is of idyllic melody, untroubled if significant in expression, not a superfluous note, ending simply, whereas ‘Pastorale’ brings another type of slowness, inward and intimate yet drawing the listener in; English ears might also nominate Gerald Finzi. Finally ‘Commedia’, music with rhythmic bite and stealthy scurrying while retaining a light touch, giving Alex Kinmonth (DSO principal) an opportunity to now display his poised agility to add to his earlier beautifully-toned and sensitive phrasing.

And so to the movies, beginning with The Cowboys Overture, a large orchestra capturing vividly the wide-open prairies and a pioneering spirit, incorporating a square-dance and camp-fire reflection, played with lavish panache. Then Jaws, with a hint of Prokofiev’s ‘Battle on the Ice’ (Alexander Nevsky, Eisenstein’s film), Slatkin reminding us that his mother, the late Eleanor Aller, plays first-cello on the Jaws soundtrack (“and scaring children ever since”), and from there to the delicate and wistful blossoming of The Book Thief. 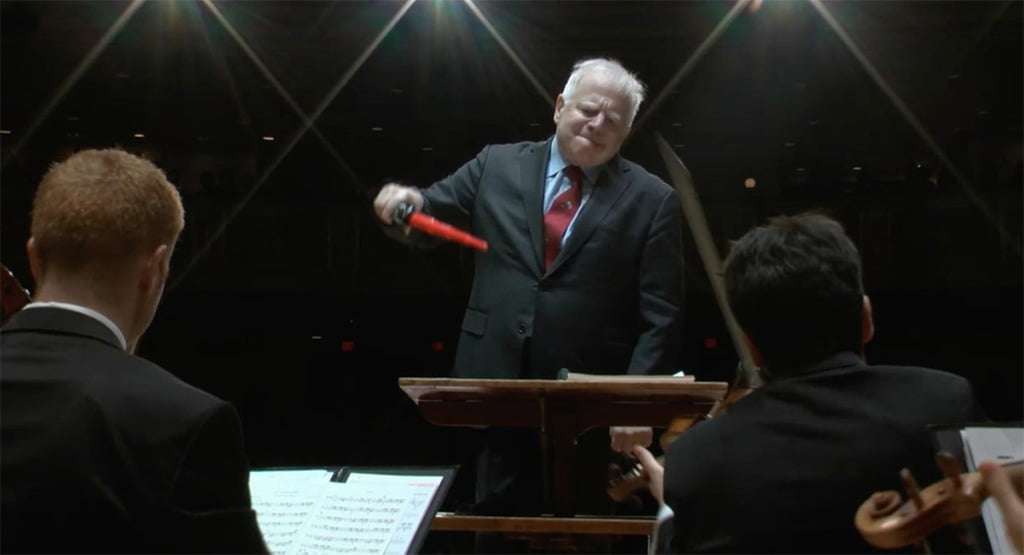 This was a well-chosen, not obvious, selection from Williams’s movie-score output, continuing with the rallying, swinging exuberantly ‘March’ from 1941 (Spielberg), then the bittersweet ‘Sayuri’s Theme’ from Memoirs of a Geisha, led-off by flautist Sharon Sparrow, Faune-like, and who else but Harry Potter turns up, the Sorcerer’s Stone in tow, ‘Hedwig’s Theme’ initiated by a gentleman on a celesta and the music develops fantastical wings: if Stravinsky hadn’t written Firebird (Liadov having stalled), then Williams could have done. Finally, Harrison Ford in focus as Indiana Jones for ‘Raider’s March’ from Raiders of the Lost Ark, DSO trumpets gleaming, and here is an earworm-plus if there ever was one.

What, nothing from Star Wars? Silly me, along comes a conducting Darth Vader for an encore, ‘Imperial March’, Slatkin using a famous prop from the film as a baton, just wish I could name it, and, when finished conducting, he generously handed the implement to a young member of the audience.

There was no sign of Mr Williams (who turned eighty-seven two days ago and he is still working hard, every day), nor of Superman; correction: he was occupying the podium. I have a feeling I am going to run out of stars during this six-pack of a series, and the next programme (which is webcast on Friday the Fifteenth) is desert-island material: Age of Anxiety and Appalachian Spring, and two Adagios for Strings, yes two of them.