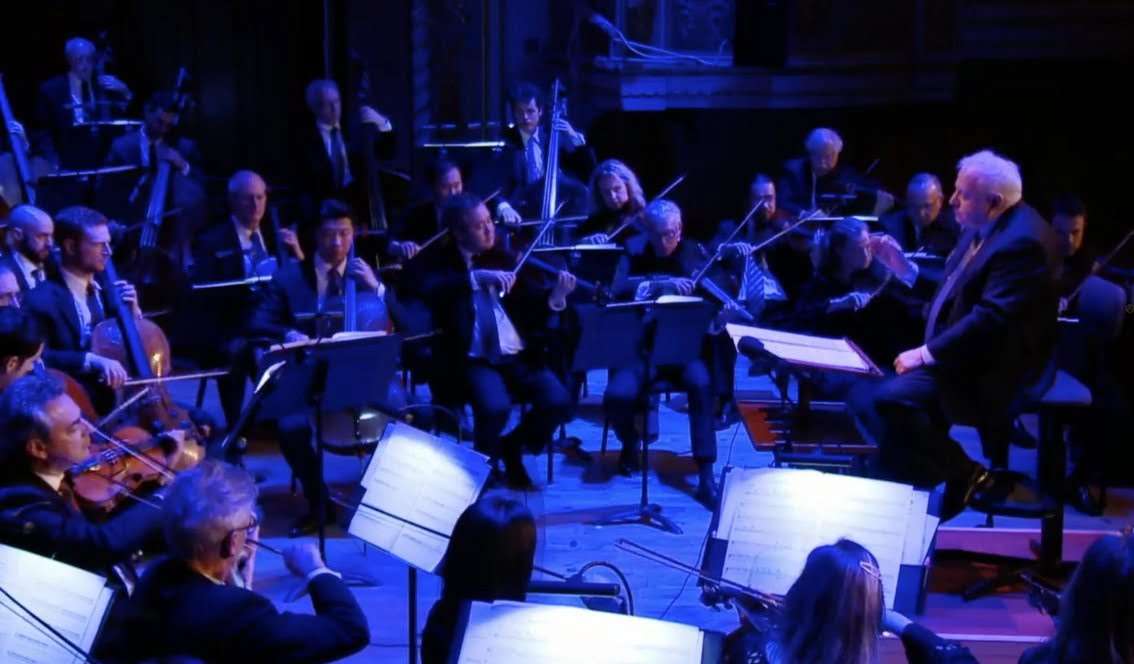 Minimalist music brings out the beast in me – foaming at the mouth, howling. I recently had a bad experience with Steve Reich’s Music for 18 Musicians, a broadcast on BBC Radio 3 that drove me to distraction: I lasted less than half of its hour-long course before I shouted foul oaths and curses and switched off (the silence was wonderful), either that or chuck myself out the window, Farewell World. Not the reaction Mr Reich would want, I imagine. At least his Clapping Music (1972) is short, a few minutes, and much praise is due to the hands-on memory, chutzpah and synchronisation of Joseph Becker & Andrés Pichardo-Rosenthal, DSO percussionists.

Similar praise for their colleagues Jeremy Epp & James Ritchie, now with Leonard Slatkin and a large Detroit Symphony in attendance, playing Philip Glass – another composer rarely found on my radar (although I have a sneaking regard for his Walt Disney opera). Glass’s Concerto Fantasy for Two Timpanists and Orchestra (2000) – seven different-sized drums for one player, five for the other, positioned front-of-stage – has its moments, not least the arresting roll-credits introduction, but whether enough to sustain twenty-five minutes is another matter, for motifs that might attract and develop are palled by their repetition: at best there’s a ten-minute piece struggling to be condensed. The relentless opening movement is followed by a subtler second that has a certain sway even if it slow-dances on the same spot. Then there is a cadenza (including orchestral percussion) – of which there are two to choose from it seems, it would be Mission: Impossible to let you know which it was, save it was mercilessly extended if segueing nicely into the furious Finale, banal as music if a showy opportunity for the soloists, taken brilliantly – hats off to the guys holding sticks – but if you want battling timpanists, plus, there is always the ‘Inextinguishable’ Symphony of Carl Nielsen, available since 1916. 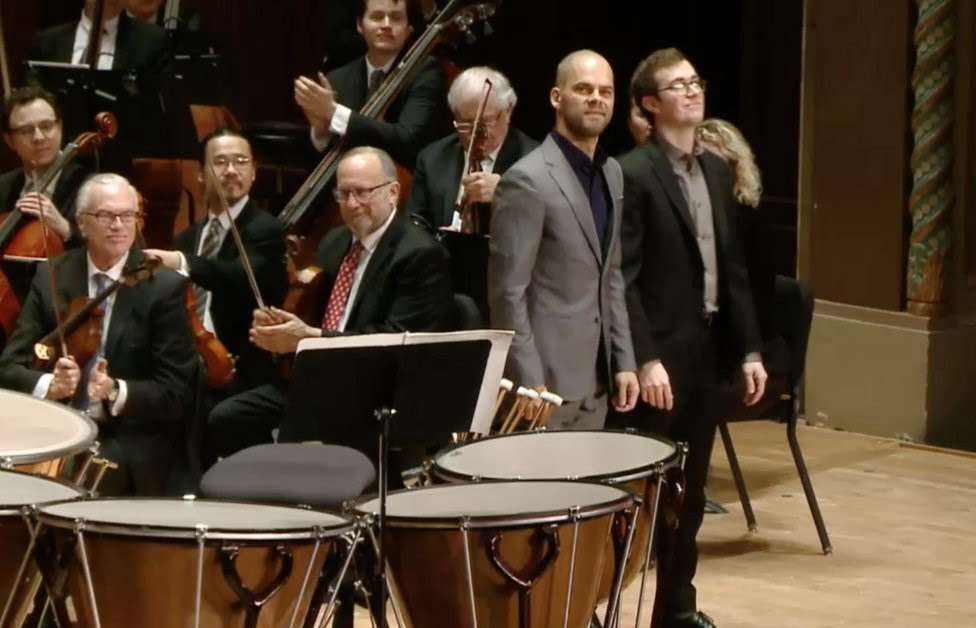 But all was saved by Become Ocean, John Luther Adams’s Pulitzer Prize-winning piece from 2014, commissioned by the Seattle Symphony and Ludovic Morlot (who has since conducted the UK premiere, review-link below). This particular John Adams – distinguished by also being Luther – born 1953 in Mississippi and until recently to be found in Alaska (he’s currently close to Mexico) has created a three-dimensional score, the orchestra deployed as a trio of independent ensembles (strings & keyboards positioned at the front / woodwinds, harp & percussion rear-left / brass, harp & percussion rear-right). As for the title, naturalist/environmentalist Adams says it’s “a metaphor for human history and the situation we find ourselves in now … We came from the ocean and we’re going back to the ocean, right? If we don’t wake up and pay attention here pretty soon, we humans may find ourselves quite literally becoming ocean again sooner than we imagine.”

Musically this translates into an expansive, slow-burn piece that proved to be a very special experience, Adams’s spatial design working a treat when listening on headphones. Not a note of his music have I heard before, but certainly Become Ocean leads you on; it is powerful in atmosphere and suggestion; there is the conjuring of a mighty sea; dynamics are carefully calibrated, crescendos of sound are apparent; the music is harmonic without relying on harmony, and consonant without being rooted; there are configurations that are more decorative than rhythmic; there are many subtle and subtly-changing hues; there are no melodies (as such) yet there is an invitation to be intensely involved in the fathoms-deep expression, and, for me, it could also be unnerving.

Baton-less Slatkin conducted seated, presumably to be unobtrusive in what might be heard as a static score but one also going places, and he needed ear-pieces to hear a click-track as a means to coordinate the groups and keep to the one prescribed tempo indication: quarter-note equals 60, and that in turn equals forty-two minutes; it was played with focus and dedication, details (piano, harps, mallet instruments, bass drum rolls, luminous strings) carrying effortlessly. Become Ocean, from nothing and returning there, yet with a clear signing of finality – growing, diminishing, patterning, re-patterning – has all the qualities to Become Addictive. ★★★★★

Become Ocean was a standout of American Panorama, alongside the performances of Age of Anxiety, Appalachian Spring and Barber’s Violin Concerto, not forgetting Jon Kimura Parker’s Oscar Peterson encore.