The Most Happy Fella
Book, lyrics and music by Frank Loesser based on Sidney Howard’s play They Knew What They Wanted 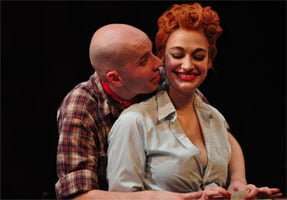 Dicapo Opera Theatre has brought back for an extended summer run its production of Frank Loesser’s The Most Happy Fella, featuring, for the most part, the cast from the show’s run during the company’s just-concluded season. In this performance, however, the two leading roles were played – quite excellently – by Timothy Lafontaine and Christian Sineath. (At most performances these roles are sung by Michael Corvino and Molly Mustonen.) The fine Dicapo cast and chorus, directed by Michael Capasso and accompanied by a 32-piece orchestra ably conducted by Pacien Mazzagatti, do full justice to Loesser’s score. The intimacy of Dicapo’s 204-seat theater and the absence of amplification provided an ideal setting in which to appreciate and enjoy this classic but seldom performed musical.

The orchestra is placed behind John Farrell’s effective sets, comprising portable furniture and props that suggest the various locales in which the story takes place. Susan Roth lights the scrim separating the actors and orchestra with colored lights in celebratory scenes and with projected light from a window to define the restaurant where the action begins. Julie Wyma’s attractive costumes effectively evoke the blend of new- and old-world cultures that characterized early twentieth-century America.

Set in San Francisco and Napa, California in 1927, the show’s principal plot concerns the romance, initiated by correspondence, between Tony, a middle-aged Italian immigrant vineyard owner, and a young waitress whom Tony calls Rosabella. The plot’s convolutions begin when Tony, fearing rejection should Rosabella see his picture, sends her a photograph of his handsome ranch foreman, Joe. 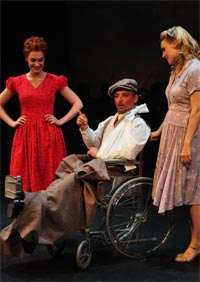 Lafontaine brought a strong operatic baritone to the gruff but kindly Tony. Even as his outward demeanor varied, Lafontaine communicated the underlying warmth in Tony’s relationships with his sister, employees and townspeople, as well as in his growing affection for Rosabella, that makes Tony a sympathetic and endearing protagonist. He also was up to the challenge of speaking many lines in Italian or in heavily accented English – an important element of the storyline.

Christian Sineath was a charming Rosabella, her lyric soprano lovely in ‘Somebody, Somewhere’ in the opening scene. She evinced tenderness in Rosabella’s duets with Tony, and anger and passion in her duet with Joe at the end of the first Act. Sineath credibly portrayed Rosabella’s naïveté, honesty and sincerity as she gradually warmed to Tony and ultimately falls in love with him.

Although the show fits more or less within the genre of musical comedy, Loesser’s score features such characteristic operatic features as recitative and leitmotifs and requires operatic voices not only for Tony and Rosabella, but also in many supporting roles. These included mezzo Lisa Chavez as Marie, Tony’s sister, and baritone Peter Kendall Clark as Joe, both of whom gave outstanding performances. Tenors Paolo Buffagni and Neil Darling and baritone Brian Carter made a sensational trio in the festive ‘Benvenuta’ and ‘Abbondanza’ and in the ‘Sposalizio’ ensemble, which features a lively tarantella choreographed by Francine Harman.

The less-operatic roles of the doctor and postman were well performed by Michael Hopewell and David Kelleher-Flight respectively, and comic relief was provided by Lauren Hoffmeier as Rosabella’s friend Cleo and Brance Cornelius as Herman, one of Tony’s ranch-hands. ‘Standing on the Corner’, sung by Herman and three of his fellow workers, and ‘Big D’, sung by Cleo and Herman when they discover they are both from Dallas are the show’s best-known numbers. Hoffmeier got the show off to a humorous start with Cleo’s lament, ‘Ooh My Feet’, and her duet with Herman, ‘Supposin’ I Should Have to Say, Goodbye, Darling’, sung as Herman, hog-tied as a practical joke, staggers around the stage, was a comedic highlight.