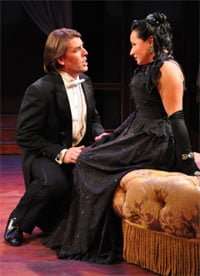 Violetta, along with Mimì in La bohème, is the consummate operatic consumptive. In Dicapo Opera’s new production of Verdi’s La traviata, Kristin Sampson – substituting for an ailing Anna Noggle – lived up to that characterization.

Sampson’s seemingly effortless singing was top-notch throughout this most demanding of roles, her top notes crystal-clear and her florid coloratura runs quite compelling. From the swinging ‘Brindisi’ to Violetta’s lyrical declaration of love for Alfredo and her heart-rending aria in the throes of emotional and physical collapse, Sampson demonstrated limpidity of sound, heftiness of voice, and an assured, emotional delivery. Her ‘Sempre libera’ was a credible demonstration of Violetta’s longing to avoid love’s trammels, even when she knows that cannot be. Sampson’s fine acting brought aplomb and a sense of purpose to Violetta’s duets with Alfredo and Germont.

After a somewhat languid start, Jason Karn warmed up to a consistently robust and rugged portrayal of Alfredo that was appropriately aloof or compassionate, reflecting his character’s changing emotions. Alfredo’s profession of love for Violetta and his outpouring of joy were wonderfully sung. Karn brought both intensity and serenity to his duet with Sampson expressing Alfredo’s heartfelt desire to take Violetta away from Paris to recover her health.

Michael Corvino showed off his exquisite baritone in ‘Di Provenza, il mar, il suol’ in which Germont tries to convince Alfredo to return to Provence, and also in his duet with Sampson, Germont’s plea to Violetta for his daughter’s happiness. The remainder of the cast also sang solidly, with notable performances by Ashley Rizzo and Julie Wyma.

Pacien Mazzagati conducted evenly and fluidly, never exaggerating tempos and the Dicapo Orchestra responded in kind with captivating playing, particularly from the strings and winds. The Dicapo Chorus more than held its own in a sea of terrific solo artists.

La traviata ends Dicapo’s 30th-anniversary opera season, although The Most Happy Fella, that most operatic of Broadway musicals, will return for from June 14 to July 8.