Mozart
Symphony No.35 in D, K385 (Haffner)
Beethoven
Piano Concerto No.2 in B flat, Op.19
Julian Anderson
Past Hymns
Stravinsky
Symphony in C 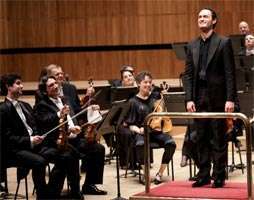 Here were three more on-the-up conductors who have already benefited from the International Conductors’ Academy of the Allianz Cultural Foundation and now chosen for the 2011-12 Season: each one was conducting a work (or two) as part of a ‘proper’ concert rather than as something competitive. The project involves the London Philharmonic and Philharmonia orchestras. According to Michael M. Thoss (MD of the Allianz Foundation), conductors are “not only exceptional artists, but … modern leadership personalities” and likens orchestras to “internationally composed and globally operating companies building an ever-increasing range of products and distribution channels.” Well, that takes away the mystique and may explain why some people have become disenchanted with what they consider the sameness and blandness of today’s music-making, however technically secure.

Nevertheless on this occasion there was at least one conductor, and certainly the guest pianist, who took us into the music to beguile and enlighten. The conductor in question was first up. Thomas Blunt (British) sculpted a fiery, graceful and poised ‘Haffner’ Symphony (his baton-less gestures expressive rather than textbook), with dynamics finely observed and much that was stylish, not least the convincing (and occasional) use of senza vibrato: free-thinking rather than pedantic. Although he was only doing what the score requests, Blunt’s observance of both repeats in the slow movement, coupled with a leisurely, Romantic approach, became too much of a good thing. Maybe the LPO was a tad string-heavy – woodwinds not always cutting through – but there was a good blaze of trumpets and crisp-sounding timpani in the finale to complete an impressive and pleasing performance. 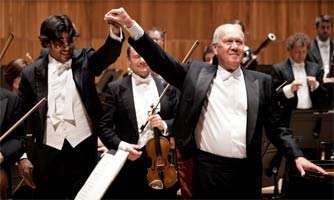 The other conductors were more conventional in their directions. The opening tutti of Beethoven’s B flat Piano Concerto (written first, published Second) seemed lacking in esprit under Domingo Hindoyan (Venezuelan), the tempo a notch under. To prove the point, John Lill entered at a slightly quicker speed and the performance took off, Hindoyan responsive to such alterations however, with the LPO unfailingly secure and lively. Internationally recognised though he is, we hear too little of John Lill in London these days. He was in typically focussed form and gave a selfless and perceptive performance that elevated this compact concerto to a new plane through playing at once crisp, sparkling, subtly nuanced and directly expressive. The first-movement cadenza was of strength and fantasy, the slow movement was given rare eloquence, and the finale enjoyed Lill’s puckish and rambunctious approach – or rather he knows just how the music goes and brought it to witty life. Indeed, throughout, one hung on every note, each one recognisable but seemingly new-minted.

Violins had been appositely antiphonal for the Classical part of the concert. For the twentieth-century pairing, the violists sat outside-right. Whether this was the conductors’ choice, I know not, Domingo Hindoyan thus settling for both arrangements given he returned for Julian Anderson’s Past Hymns (1997). Scored for string orchestra, Past Hymns made a big impression in this well-contoured performance. Sourced from American Spirituals and Hymns, the music is saturated and rich and driven with Revivalist fervour, before fragmenting to a halt. The composer seemed delighted. 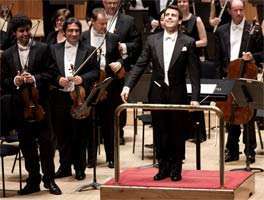 Ward Stare (American, Resident Conductor of the St Louis Symphony Orchestra, the post created for him by Music Director David Robertson) arguably had the most-difficult task, conducting Stravinsky’s Symphony in C, a lexicon of rhythmic tricks and turns, and exposed writing, and with much that is chaste (abstract, if you will), yet needing to be sustained as much by heart as by head. At an Allianz concert in 2008, the LPO played this work for Benjamin Northey. It was impressive. Maybe Stare took the first movement just a hairsbreadth too fast for everything to gel, but initial (and slight) executive uncertainties were soon overcome. In music that is deceptive in that it is perhaps best to take it at face value – looking behind the notes only causes problems of “why?” – Stare lucidly progressed through the work, not over-expressing its pastoral simplicity, but making it sincere nonetheless, and finding a compelling solemnity at the opening of the finale. Otherwise the music pirouetted with grace and the decoration and deft counterpoint was intelligibly realised. The playing was deft and poetic.