The Doric String Quartet has had a change of personnel recently, Hélène Clément replacing Simon Tandree as violist. 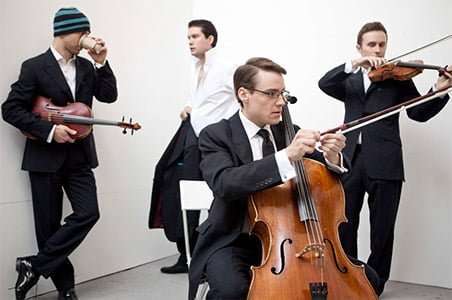 The musicians began this BBC Radio 3 Lunchtime Concert with Haydn, the last of his revolutionary set of six quartets Opus 20. A substantial piece, its subtle innovations of texture include questioning the role of the first violin, hitherto given almost complete melodic dominance in quartet literature. In the first movement the instrument continued with its leading role, but Alex Redington was slightly backward in the balance, so the bravura of the opening theme was relatively modest and difficult to hear fully. There was however some fine playing as things settled, Redington’s natural agility coupled with sensitive use of vibrato from his colleagues. There was a particularly effective approach to the recapitulation, with no vibrato at all and stripped back textures, the music briefly lost in thought before resuming. The soft, serene Adagio was a delight, fully adhering to its ‘cantabile’ marking, while the Minuet was brightly voiced. This contrasted with its Trio, the second violin tacet throughout as the tone became mellow and rather sombre. The finale, an energetic fugue, was cleanly delivered, with longer notes given less vibrato to secure an attractive blend of the two different speeds.

The string quartets of Robert Schumann have become a speciality for the Doric members, who recorded them for Chandos in 2011. Their performance of the Third was a delight. To start with the musicians seemed at pains to play softly and delicately, especially in the first movement, with its echoes Beethoven’s E flat Piano Sonata (Opus 31/3). This graceful charm was, however, absent from the exploratory second movement, a mixture of scherzo and slow movement as it switched abruptly between sweet and rather sour moods. Gradually the musicians exerted more pressure, the music becoming progressively heavier until they broke through to the light of the major key. The slow movement proper was nicely poised, but again was not without a troublesome central section, a frown briefly crossing the face of the music. And so to the finale, one of Schumann’s finest, with an obsessive but winsome melody that strutted forward confidently. This was nicely complemented by the light footed, gavotte-like episode that recurred as part of the rondo form, smiling in this performance.

As an encore the Doric returned to Haydn’s Opus 20 set, playing the finale – another fugue – of No.5 in F minor.