Members of the Orchestra of Scottish Opera
Stuart Stratford 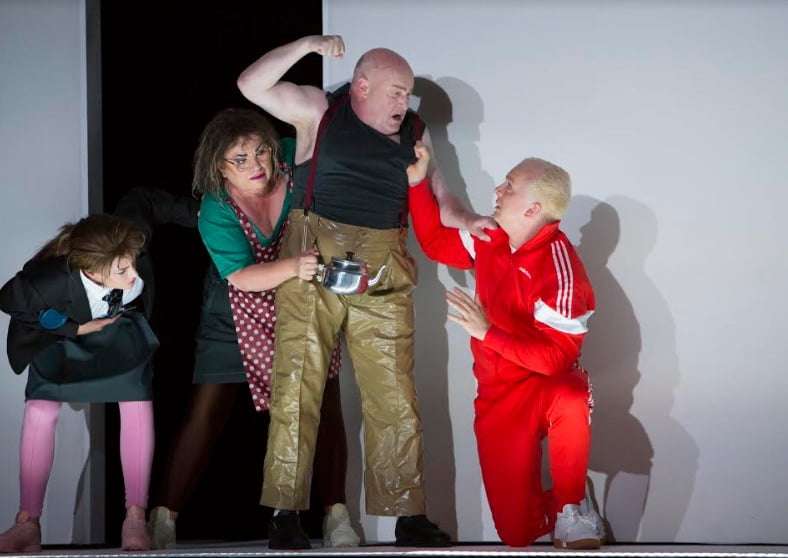 Who would have thought ketchup and beans could feature so garishly in an opera or symbolise so much? In this new production of Greek, presented by Opera Ventures and Scottish Opera, Mark-Anthony Turnage’s contemporary classic is a triumph of imagination, staging and casting.

Despite being his first opera (there has since been The Silver Tassie and Anna Nicole), Greek is an astonishingly assured work and, though it may no longer shock, it still packs a hefty emotional punch and deserves its place in the repertoire; a position conveniently sustained by its chamber scoring (eighteen players) and a quartet of vocal soloists.

Based on Steven Berkoff’s uncompromising play, Greek is an in-your-face makeover of the Oedipus story (EastEnders style) brilliantly intersecting the past with the present that is by turns poignant and provocative. As an anarchic reflection of Thatcherite Britain, including racism, strikes and social unrest, the music’s muscularity and haunting melancholy amply serves the plot: Eddy quits home in London’s Tufnell Park (“a cesspit”) and becomes involved in a riot, later running a cafe with his new girlfriend who turns out to be his mother – fulfilling the words of a fortune–teller who predicted he would kill his father and do “a bunk up with his mum.” He tries to save his city from the plague, but the discovery of his adoption tips him over the edge and he gauges out his eyes – or does he? At the end Eddy dismisses the ancient myth with a blunt “bollocks to all that” and so love seemingly conquers all.

Strikingly absent in this imaginatively-conceived production is any set; instead Joe Hill-Gibbons and Johannes Schütz adopt a minimalist approach and use only the front of the stage for the singers. Behind them a plain white wall (which rotates) serves to capture visually-arresting back-screen projections including maggots swimming in a sea of eggs, beans and tomato ketchup – representative of the squalor of a rat-infested 1980s’ London.

Equally disturbing is a chorus of stamping boots and riot-shields from within the instrumental ensemble – a masterly scene in which music and demotic text provide all the necessary punch to convey the rampant violence of a street battle. Fast-changing costumes and accents (urban and refined) take us seamlessly from grotty pub to glitzy wine-bar in Act One, while infantile drawings during a sequence outlining Eddy’s disappearance as a two-year-old tragically evoke a once-happy childhood.

It was the quality of singing and acting that really left an indelible impression; Susan Bullock as a common and compassionate Mum, Andrew Shore as a warmly lyrical Dad (whose every move and facial expression commanded attention) and Alison Cook as Eddy’s real mum and lover whose aria lamenting the death of her abusive husband was matchless. Alex Otterburn (a recent graduate from the Royal Academy of Music) gave a performance of searing intensity as Eddy, singing with blazing conviction and inhabiting his uncouth and aspiring character with complete ease.

To the score’s jazz-infused colouring and rhythmic vitality the eighteen players responded with clarity and precision. Whether in wailing saxophones or raging percussion textures, the whole was incisively coordinated by Stuart Stratford. Opera doesn’t get much better than this – but ketchup and beans will never be the same again!