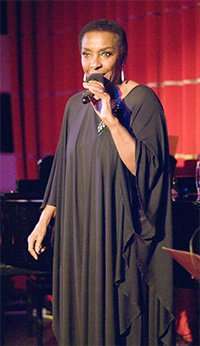 A celebrated jazz vocalist, Elaine Delmar is a notable stylist who serves a catalogue of standards with distinction. Her debut at The Crazy Coqs cabaret room consists mainly of songs by George and Ira Gershwin: ‘I got rhythm’, ‘A foggy day’, ‘Strike up the band’, ‘Embraceable you’, ‘Love is here to stay’ and ‘Summertime’ – always a joy to hear, particularly when invested with the sincerity as well as occasional playful impudence that Delmar brings to them.

Alas, in ‘‘S Wonderful’ she falls into the familiar trap of singing “it’s marvelous” instead of “‘s”. But her versions of ‘They can’t take that away from me’ and songs from Porgy and Bess are a delight. Adding to the pleasure are Delmar’s two accompanists, Brian Dee and Jim Mullen, who provide sterling backing and demonstrate their improvisatory talents. Delmar’s arrangements are particularly fresh, and include a finger-snapping ‘Love walked in’ and some unaccompanied warbling on ‘Fascinating rhythm’ and ‘Love is here to stay’.

I was less happy with the bossa nova approach to ‘The man I love’, which is such a superlative ballad in its original form. Delmar is perhaps at her best when lending her liquid and caressing vocals to such ballads as ‘How long has this been going on?’ and ‘I loves you, Porgy’. Although her Gershwin repertoire sticks mainly to the familiar, she slips in a couple of lesser-known gems. ‘Blah, blah, blah’ is Ira’s witty pastiche of trite love songs, which she handles playfully, and she taps beautifully the rueful humour of ‘Isn’t it a pity?’ which laments the lost years before lovers first encountered one another (“My life was sour, spent with Schopenhauer”).

Delmar’s father was the band-leader and jazz trumpeter Leslie ‘Jiver’ Hutchinson, and she was only 13 when she made her broadcasting debut playing piano on the BBC’s Children’s Hour. Delmar also appeared in the revue, Cowardy Custard (1972), a biography of Noël Coward. She gives us the rare treat of a lady singing ‘Mad dogs and Englishmen’. She reminisces too about her appearance in Bubbling Brown Sugar, a variety show in which she sang ‘Fats’ Waller and Andy Razaf’s seductive ‘Honeysuckle rose’. A third non-Gershwin song from Delmar is the poignant ‘Guess who I saw today?’ by Murray Grand and Elisse Boyd, originally introduced in New Faces of 1952. After her touching interpretation, Delmar tells an amusing anecdote relating to it – a very welcome touch of comment, for Delmar keeps chat to a minimum and more would be welcome. Dim lighting is carried to an extreme, apparently at her wish – it was a bit of a strain to see her, but one could hear her and that’s the main thing.