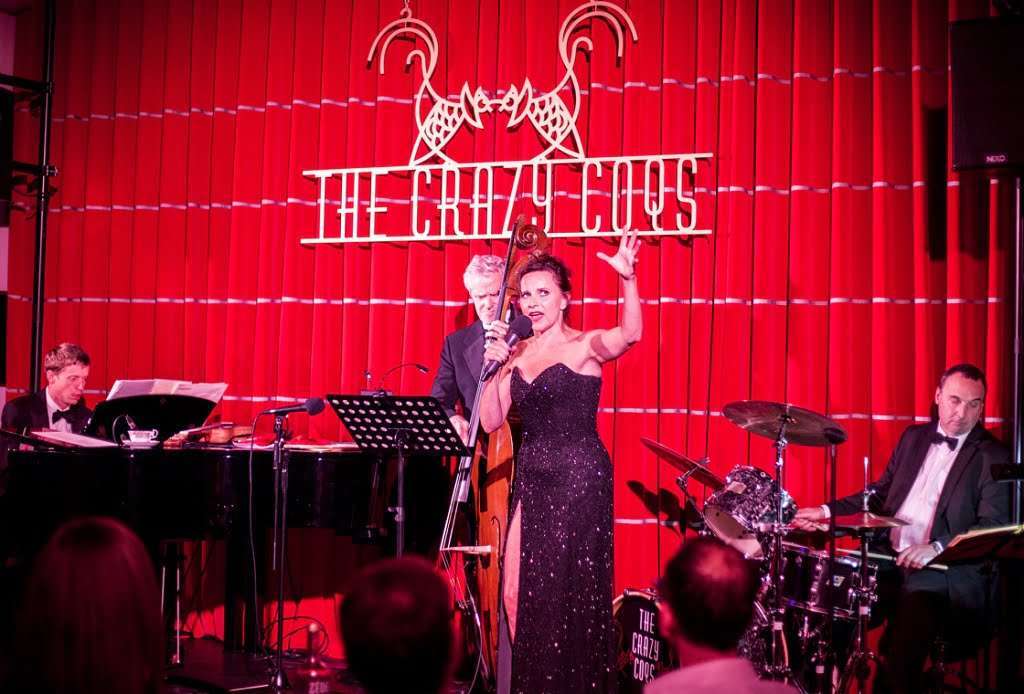 A seasoned leading-lady of the musical stage with a clarion-style delivery that rivals Ethel Merman or Judy Garland, Sally Ann Triplett has starred in shows ranging from the raunchy Country-and-Western hit The Best Little Whorehouse in Texas, through classic works such as Anything Goes and Guys and Dolls, to Cats and Mamma Mia!. For her cabaret at The Crazy Coqs, she presents a survey of her career and a musical programme that includes songs from most of the productions in which she appeared.

Sally Ann started her career as a circus performer (hence the reference to elephants) and she confesses that she first attracted attention as a junior by being the one who sang loudest, and at age 18 she made the first of two appearances in the Eurovision Song Contest, a record equalled by only three others – Cliff Richard, Ronnie Carroll and Cheryl Baker (with Co-Co, then Bucks Fizz).

In her first West End show, the Drury Lane production of Whorehouse, Sally Ann was a ‘swing’ understudy, taking on several roles. She also played the young Margie in Follies, Florence in Chess and Betty Rizzo in Grease prior to playing movie-actress Ruby Keeler, star of 42nd Street and wife of Al Jolson in the biographical musical of him, which featured Brian Conley. She tells an anecdote about Conley which makes one wish she would pepper her act with a few more ‘inside’ tales. She has appeared with many stars along with such creative giants as Stephen Sondheim and Andrew Lloyd Webber, but shares little of those experiences, and relies on prompts from her pianist to recall dates.

He is Mark Dickman, whose terrific playing – including jazz, ragtime and stride – is awesome. Dave Berry and Martin Lazzell also impress and they give Triplett solid backing. There are plenty of belting showstoppers, including ‘Robert E. Lee’, and some tenderly effective ballads, such as an unexpectedly plaintive approach for ‘When the red red robin comes bob-bob-bobbin’ along’, and ‘You made me love you’, originally written for the young Garland (“Dear Mr Gable…”). Her somewhat rushed version of ‘Anything goes’ indicates that she might have studied at the Patti LuPone school of diction, but she gives full weight to the lyrics of ‘All that jazz’ from Chicago – for which she has us participating – ‘There are worse things’ from Grease and ‘I’ve got the world on a string’.

It is unusual to hear ‘Luck be a lady’ from Guys and Dolls sung by a female, and there are several George Gershwin gems, for some of which she is joined effectively by Sam Harrison. Triplett has just finished appearing in the Gershwins’ Damsel in Distress at Chichester. Prior to that she was on Broadway in The Last Ship, which has a score by Sting. “If the rest of the show had been as good as Sting’s songs, the piece would still be running”, she tells us prior to warbling a ballad from the show. It is good to see the versatile Triplett displaying her talents in a cabaret setting, and the evening comes to a close all too soon.