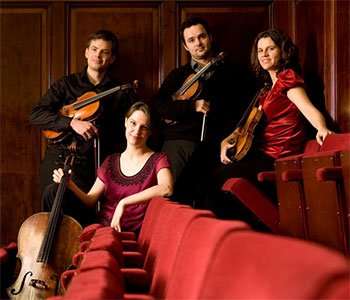 This BBC Radio 3 Lunchtime Concert provided a fascinating opportunity to witness the coming together of old and new, with 83-year old Leon Fleisher, looking pleasingly sprightly, linking up with the fresh, enthusiastic members of the Elias String Quartet.

Their interpretation of Brahms’s Piano Quintet was a fascinating one, a labour of love. Fleisher it was who set the slow tempos adopted for each movement, but at no point was this at the expense of musical insight and expression. Quite the contrary, with Fleisher intently watching Sara Bitlloch in the unison opening, the subsequent outburst held back a little to preserve the keen atmosphere of tension.

The Andante was especially poetic; Fleisher’s phrasing a wonder of emotional investment, the pianist relaxed in posture but firmly in control. The Elias musicians; sound was relatively rich here, free in its vibrato, but warmly expressive. In the scherzo all five players dug in grittily as the music embedded itself in the ostinato rhythms that flash back to Beethoven’s Fifth Symphony, the moderate tempo fully yielding its rewards in the forthright response in the major key. When the finale began, however, the sound was a barely audible pianissimo, if with white-hot intensity. Gradually the music gathered itself, and though the ending of this movement, and the scherzo, contained a few wrong notes in octave displacements on the piano, this was a small price to pay for a revealing performance that considered this masterpiece afresh.

By way of Schoenberg, Webern could be said to have enjoyed the influence of Brahms early on in his career, though Schubert could also be heard in the music of Langsamer Satz. This ‘slow movement’ could only be an early utterance, offering no clues to the eventual direction of its composer. The Elias Quartet expressed the heady romanticism of Webern’s outpouring of love for his cousin, with whom he was in a relationship at the time, through expressive portamento and bold, rich vibrato. They were however more effective in the softer passages, where a clever use of pizzicato created silvery, moonlit textures similar to those of Schoenberg’s Verklärte Nacht, and the solos of Martin Saving and Marie Bitlloch were nicely done.