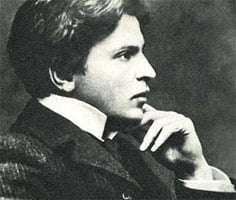 George Enescu (1881-1955) was, by all accounts, a brilliant violinist (he was the teacher of Yehudi Menuhin) and a fine conductor (he was considered as Toscanini’s heir at the New York Philharmonic) and pedagogue, as well as being passionate about music from his native Romania, where he formed the Philharmonic Orchestra and the Romanian National Opera in Bucharest.

This recital was held in a large room in the Romanian Cultural Institute. With its high ceilings and hard floor and walls this seemed to be the ideal locale for chamber music-making, and so it proved, despite the worst efforts of a noisy audience, a mobile phone and a page turner who seemed unable to read music! So that the piano did not completely overwhelm this room, the lid was a fraction open – held so by a Roman-Englez dictionary!

Sonata No.2 is the work of an 18-year-old, but you would not think it. Enescu said that he had found his own way in music with this piece. The ‘events’ that occupy the opening Assez mouvementé were given visceral treatment, perhaps not entirely appropriate. Otherwise, a nervous energy pervaded. The lullaby aspects of the second movement, Tranquillement, were destroyed by the mobile phone. Even so, there was passion in the playing that recaptured the appropriate mood. The Vif finale was exciting and delightful, with its sweeping lines allowed to reign, with the very close raising a wistful laugh.

The ten-movements-in-one ‘Impressions from Childhood’ was a pleasant surprise. It is always difficult to match the pieces with their ideas because these are not our recollections, but Enescu’s. However, what can be said is that the writing here is quite startling. The opening ‘Fiddler’ (violin alone) has extreme figurations and is very agitated. Similar, strange soundworlds are employed in ‘The bird in the cage and the cuckoo on the wall’. The music from the piano is vague in its indistinct writing. The stormy episodes (‘Wind in the chimney’ and ‘Storm outside, at night’) present mystery rather than brute force, and are the more powerful for it. 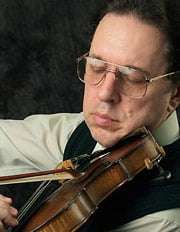 Sherban Lupu is passionate about Enescu. During his sabbatical year he spent time in the archives of the Romanian Cultural Institute in Bucharest, studying Enescu’s manuscripts and attempting to prepare new performing editions. He found four Airs (for violin), preparatory ideas for the Third Sonata, on the back of a 1925 manuscript score of that work, and spent a good deal of time arranging them. The second, Allegro giusto, is a virtuosic affair with the following Andante presenting a mournful characteristic. Full of colour and vitality, the fourth had the required fire, but this was kept under the surface, only threatening to come out.

The Third Sonata is a mature masterpiece. The audience was captivated and the effect was like being hit with a huge force. This is an Impressionistic work, lacking the defined themes of the other works heard here; there is no need to be programmatic to produce great music. This was evident in the opening Allegro malinconico, which offered serious ideas subliminally. The level of colouration in the music was given overwhelming treatment, but it was the talent of the performers that made the effect spellbinding.

The second movement was enigmatic, no answers even hinted at – fully in line with the composer’s intentions. The piano escapes the grasp of the violin so that two voices are heard yet they speak the same language. The ‘folk character’ appeared before the utter desolation at the close. A tranquil start to the finale was shattered by pulverising pizzicatos, which created an intense finish. This was an extraordinary performance and left one frozen in shock at the power of the music.

The next Enescu Society concert is with pianist Mihaela Ursuleasa on 6 December.