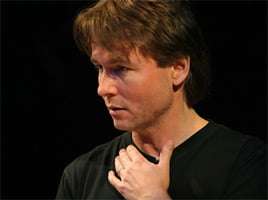 As part of his written introduction to “Sibelius Unbound”, Esa-Pekka Salonen, who was born shortly after the composer’s death, stated “the ideal Sibelius performance should feel like the ice breaking in a great northern river in April: intense, beautiful, terrifying and ultimately inevitable.”

This proved a perfect summary of the Los Angeles Philharmonic’s performance of ‘Lemminkäinen’s Return’, a real ice-breaker with a thrilling rush of strings, jabbing horn motifs and a bite in the trombones. Salonen had the double basses seated to the left across the back, with antiphonal violins, the brass across the back. The sound was beefy but with extraordinary clarity and brightness, strings playing as one.

With ‘Lemminkäinen’s Return’ a statement of intent, part of Sibelius’s first four-movement work for orchestra alone gave an indication of the composer’s early symphonic thinking – programmatic, yes, but looking ever closer at the form.

In choosing one of his own works, Salonen deflected the attention from Sibelius for a while, though in choosing contemporary works to break the symphonies the elder composer’s influence can be keenly felt. So it was here, though “Wing on Wing” begins like a stretched version of Debussy’s Nocturnes.

The substantial, half-hour piece pays equal homage to the recently built Walt Disney Concert Hall in Los Angeles, and its architect Frank O. Gehry. It calls for virtuosity throughout the orchestra – never in short supply in this performance, as the music surged forward. There was a metallic flexibility to the sound – rather like the Hall’s design – with shrill percussion overtones accompanying wordless sopranos Anu Komsi and Cyndia Sieden, often taxing the upper reaches of their range. At the opposite end are electronic samples of a school of fish and Gehry’s voice, manipulated through one touch of a keyboard. The sopranos moved around the Barbican Hall, deserving applause not only for their exceptional delivery (Sieden was standing-in for the unwell Piia Komsi) but for being able to sing after ascending and descending four flights of stairs!

Formally Salonen’s work felt a bit inflated, but there were many good things within – textures to hold on to, and an especially touching yet angular oboe solo from Ariana Ghez, which prefaced an ecstatic, Scriabinesque middle section. While the music felt as if it was trying too hard to impress at times, the final two-chord climax was suitably convincing.

Sibelius’s Second symphony then received a sleek but also deeply-felt performance. With clarity of texture by now a given, Salonen was able to exploit the massive dynamic range the composer’s music affords, from the exquisitely tentative pizzicato of the double basses and cellos in the slow movement to the unbuttoned glory of the finale.

The slow movement showed marked tempo changes, a little too fussy on the part of Salonen, but well executed, and indisputably the heart of this performance. Again Ghez was most impressive in her phrasing of the trio theme from the scherzo, which returned with a sudden snap to wrench us out of thoughtful mood. Salonen demonstrated an ideal command of the symphony’s proportions, pushing the first movement on with just enough impetus and driving the finale home, with wonderful unison from the strings. The unity between the movements was strongly persuasive, in this sense bringing Beethoven’s influence to the fore, while the big themes were Romantic in their delivery but just within themselves.

As an encore Salonen offered the contemporaneous Valse triste, a sinewy performance that exploited the colder sound offered by the Los Angeles strings. The waltz itself swung vigorously, the tempo and any variations kept in tight check by the conductor.