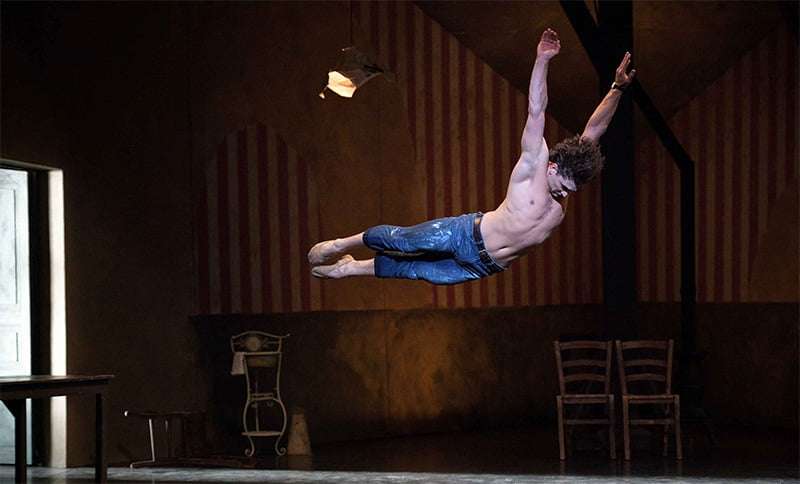 What a good ballet Roland Petit’s Le jeune homme et la mort is, and, over 70 years since its creation, a precious surviving example of the whole French post-war aesthetic, an aesthetic suffused with existentialism, surrealism and symbolism; one only has to think of the magnificent films of the forties and fifties to evoke that particular brand of stylised chic. And so it is with Jeune Homme, which received a welcome revival by English National Ballet as the ‘opener’ for the second week of La Sylphide at the Coliseum.

But such a specific style requires careful, meticulous work to be achieved, so it is good to report that Luigi Bonino, the main repository of knowledge of and insight into Petit’s œuvre was on hand to supervise preparations, with superb results. This work is well-known for several reasons, not the least of which its stunning designs by the now near-forgotten Georges Wakhévitch – the young man’s garret room, a masterpiece of receding perspective and symbolic touches gives way at the end, in a genuine coup de théâtre, to a roof-scape of Paris, with mansard roofs and even the flashing Citroën advertisement on the Eiffel Tower.

It is good to report that all was scenically in order and that perhaps the last extant example of this artist’s work still looks wonderful. The work is known too for its music – Bach’s Passacaglia and Fugue – whose weight and insistence perfectly underpins this allegorical tale and which, at these performances, was given due emphasis by Gavin Sutherland and the ENB Philharmonic.

The ballet is a two-hander: a bored young man waits in his scruffy room for his lover who, when she arrives, taunts and excites him and leads him to his own suicide. The final scene sees her reappear as Death and to lead the Young Man to eternity over the rooftops of Paris. Two pairings showed how the work can take different personalities, different interpretations. Ivan Vassiliev, evidently proud of his developed musculature, gave a highly-strung, almost histrionic reading of the Young Man. He has matured as an artist since his first appearances some years back, and knows how to communicate the growing despair of the character. He still carves great chunks if movement in the air, his power prodigious, his technique secure. As his nemesis Tamara Rojo donned the famous yellow dress, black wig and gloves to deliver a teasing Death, playful in her destructiveness, implacable in her mission. Certainly, this pairing was a meeting of two ballet stars, both revelling in the stylisation of Petit’s concept.

Yet, for this critic, the pairing of Joseph Caley and Begoña Cao gave even more satisfaction. Caley is not as physically imposing as many who have danced this role, but, crucially, he comes across as a genuinely young Young Man, one who would easily be in the thrall of Cao’s older mistress. He allies a fine technique, making the execution if his steps a pleasure in itself, with a subtle dramatic instinct. Cao is splendid – a cruel, almost mechanical, seductress whose physical contact with Caley clearly gives him into both intense pleasure and pain. She is unyielding, vengeful and inexorably leads him to his own self-destruction. Two radically different interpretations of this fine ballet, both of which show the depth of talent at ENB.