The Cage – Ballet to choreography by Jerome Robbins 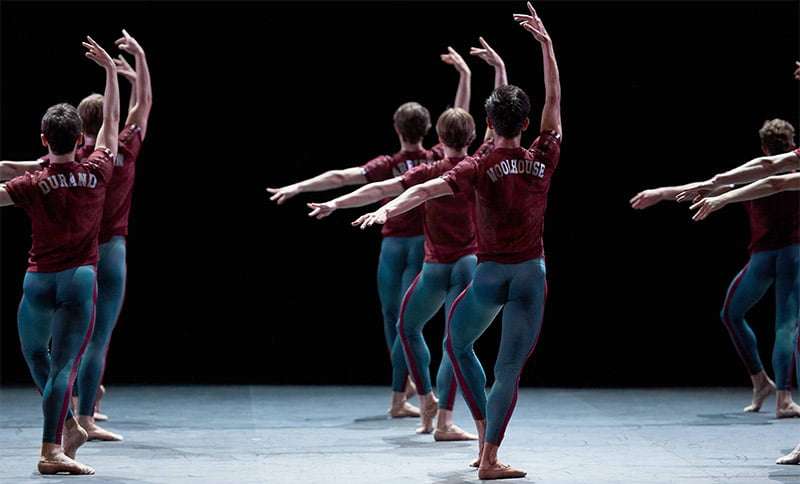 It was a brave move to schedule a ballet programme entitled Voices of America and not to include a work by George Balanchine, the man credited with establishing Classical dancing in the USA. But Tamara Rojo, English National Ballet’s doughty Director often thinks outside the obvious and puts together interesting and sometimes arresting works to create a cogent whole. And so it proves with ENB’s latest offering at Sadler’s Wells, where the company enjoys associate status and where it stretches its artistic wings after months of touring bankable full-length works.

The news of this programme was the creation of a new work by revered choreographer William Forsythe, his first on these shores for twenty years. Rojo is attempting to create an identifiable quality which marks her company out as different from The Royal Ballet, and her strongest card to play is that of repertoire; while Covent Garden has tied itself down to the current triumvirate of in-house choreographers who dominate the schedules with works of increasing tedium, plus the invitation to the odd non-ballet dance-maker, Rojo has gone shopping and brought in this new Forsythe work, which she has put alongside a major revival of an important Jerome Robbins work in the choreographer’s centenary year – nice touch – a pre-existing Forsythe piece and the revival of an intriguing work from Aszure Barton which the company premiered a couple of years back as part of their all-female choreographer evening. In every way, this programme showed an intelligence in programming. 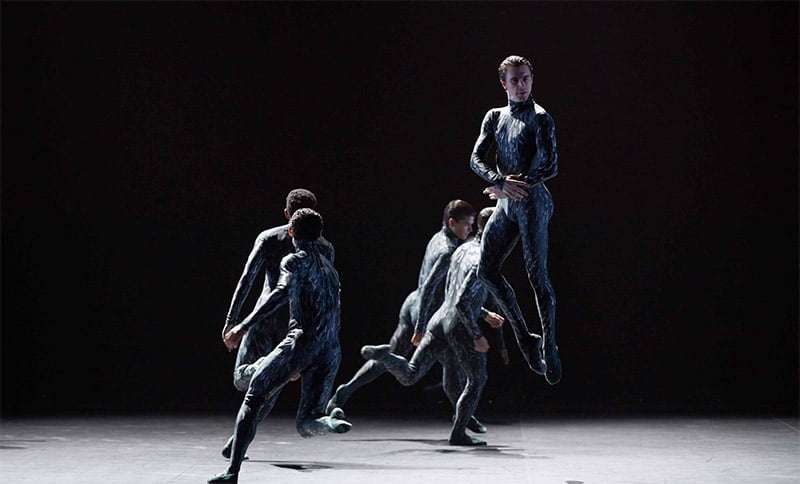 In 2016 Barton’s Fantastic Beings suffered from being the third piece in a long evening and from stygian lighting, which made identifying the dancers impossible. This time, it was placed as an opener, and Burke Brown has ratcheted up the lights, so we can all see what is happening. It has also been tweaked here and there since and shortened by five minutes – it could do with losing another 10-15, which would tighten it further and remove some of the several false endings. That said, it is an enjoyable and intriguing work, underpinned by Mason Bates’s tremendous score, a riot of sound evoking the fantastical menagerie of Jorge Luis Borges; it starts in distinctly aquatic mode with oxygen bubbles of sound rippling through the orchestra, moving on to lively, often syncopated sounds, strange, exciting, and exhilarating. The company orchestra was put through its paces and won fair and square – a superb achievement.

Barton uses the classical vocabulary while infusing it with animal-like shimmies, shudders, flicks and gestures. She marshals her twenty dancers with impressive command, moving dextrously from powerful ensemble to intimate solo or duet, and at every point the ENB dancers respond with alert vitality, principals and corps de ballet alike moving with common purpose. The grey-green mottled all-in-one body stocking lend them an otherness entirely in keeping with the overall concept, while sparkles of glitter float down in the otherwise black box of the stage. It makes for a strong, if over-long opening.

Forsythe has revived his Approximate Sonata 2016 for the company, itself a reworking for the Paris Opéra ballet of a 1996 work. It is playful, witty, sharp and stylish, a superb showcase for four couples who are put through their neo-classical steps to Thom Willems’s electronic pots-and-pans score which, unlike in some other ballets he has composed for, does not grate. Each couple is subtly different, the pairing of Alina Cojocaru (three cheers for her return to the stage after the birth of her child) and Joseph Caley youthful, playful, toying with their technique with insouciance while Jurgita Dronina and Isaac Hernández brought great lyricism to their pairing, a deconstructed Swan Lake pas de deux of rounded arms and gentleness allied with Forsythian kicks and over-extensions. Tiffany Hedman and James Streeter came across as more expansive with a mature quality, while Precious Adams (lime green pants worn over her black leotard) and Aaron Robison gave a sassy, explosive rendition of their fourth duet. Approximate Sonata 2016 is a superb acquisition for the company, and it rises confidently to its challenges. 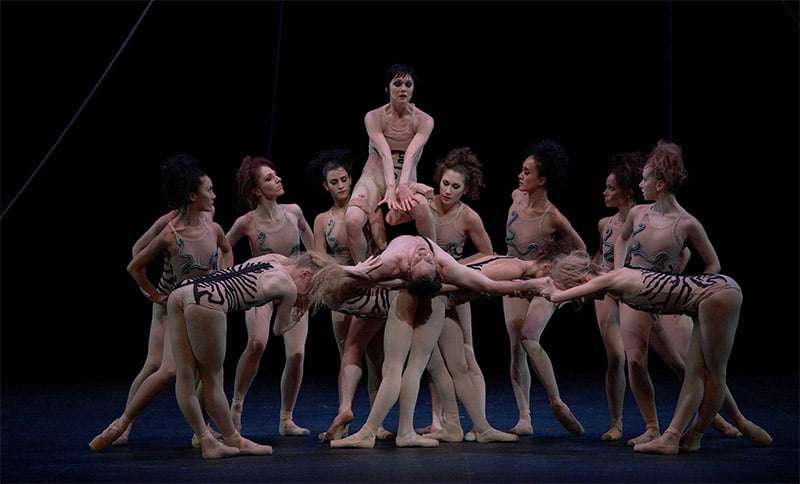 The Cage, first given in 1951, stands as a ballet of great importance as well as still working for a modern audience. Some find it old-fashioned, but that is, perhaps, to miss its subtleties and intrinsic power, undimmed over nearly seventy years. The source of tis genius is its brevity, the story of a hive of predatory female insects who destroy any male intruder – all in 12 minutes. Stravinsky’s Concerto in D perfectly matches Robbins’s concept as the choreographer fuses Classical Dance with the modern – Balanchine and Graham. It starts with the ‘birth’ of the novice, powerfully danced by Dronina, in a scene reminiscent of the summoning of Giselle from her grave by the Queen at the beginning of Act II; Begoña Cao is tremendous as Robbins’s implacable monarch of this particular hive. James Streeter plays the man who, after a brief period of attraction with the Novice, is dispatched by her to the exultation of the sisterhood – he makes much of his stylised movements.

In a clever counterpoint, the twelve ‘ladies’ of the corps de ballet in The Cage are mirrored by twelve men in Forsythe’s new work Playlist (Track1,2). Forsythe is 68 but this new work shows that he is at the forefront of his art form, intensely current and contemporary – two tracks of pop music are matched by an increasingly extravagant interpretation from the twelve men all within the Classical Dance idiom, scattered lightly with contemporary dance references – disco to hip-hop. It is hard to describe the cleverness and sophistication of the choreographer’s disposition of his stage forces; three quartets melt into other combinations, solos emerge and disappear from the ensemble, each effect achieved with confidence and then the eye drawn to something else.

The first track gives way to the second which pushes the men on to ever more dizzying feats of technical aplomb, leaps and spins ever-more daring. It is also huge fun for the audience who are whipped up into hand-clapping and whooping and also for the dancers, who have a chance to loosen the throttle and go full pelt at something they clearly relish. ENB has itself an instant hit, a perfect closing piece to send their audiences out in a state of elation, and a work by one of the world’s most justifiably revered current dance makers. And for once, we didn’t miss Balanchine.