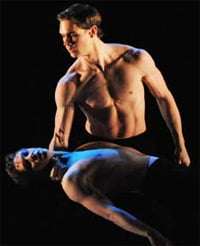 English National Ballet have, for a few seasons now, succeeding in catching the zeitgeist, from their wildly popular tribute to the Ballets Russes to this present mixed bill, neatly titled Black and White and centred on a revival of Serge Lifar’s impossibly chic Suite en blanc (originally Noir et Blanc). The company has, cannily, thrown in the Black Swan pas de deux to net any passing Natalie Portman fans, and was rewarded with a packed Coliseum for first night, and that on the same evening as the first night of The Royal Ballet’s new triple bill at Covent Garden down the road. Director Wayne Eagling is presiding over a renaissance in this company’s artistic fortunes, a careful rebuilding of repertoire that is stimulating for both audience and dancers, and he also possesses some real talents, both developed and developing, so an evening with ENB is almost always both interesting and rewarding.

The mixed bill (a generous five pieces) starts with Eagling’s own Resolution, set to Mahler’s “Rückert-Lieder”, strongly sung from the pit by Elizabeth Sikora. If truth be told, Eagling’s experience of and thereby influence from Kenneth MacMillan’s works (he was one of the chorographer’s ‘muses’, creating many works) comes through most strongly in his use of pose and grouping, although his penchant for sometimes complicated partnering reminds more of Glen Tetley, and the choice of Mahler cannot but draw links with MacMillan’s great Song of the Earth in which Eagling himself often danced. Chicly costumed in Wizzy Shawyer’s creations, the dancers are the only link between the five songs, each a discrete entity, unrelated to the others. It is solid ballet fare and only really becomes something special in the final song which is a pas de trios for three men, two supporters and one supported, a smooth, flowing creation, subtly but never mawkishly evoking the crippling condition Duchenne Muscular Dystrophy. It was powerfully danced by Zhanat Atymtayev, James Forbat and the smaller Van le Ngoc.

Le Ngoc is a better dancer than choreographer, so a veil should be drawn over his Vue de l’Autre, an unsuccessful essay in dance-making and drawing on every cliché in the book, including a plastic rose. Matters were not helped by his choice of truly dreadful music by Ludovico Einaudi, which would cause complaints if played in the aisles of a budget supermarket.

The Black Swan pas de deux is what it is, a show-piece, here rather well danced by two of the company’s most established Senior Principals Erina Takahashi and Dmitri Gruzdyev. I like Gruzdyev’s dancing, and if he sometimes comes across as a trifle too old, he retains his training, bearing and much of his technique – he certainly presents the choreography with more style than many a younger dancer, and he partners with both care and strength. Takahashi whipped off all the tricks and turns as required, demonstrating a steely balance and a welcome sharpness as the evil seductress. 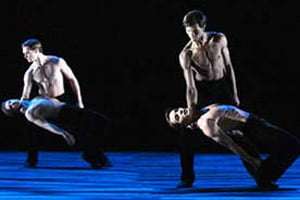 Eagling also scheduled his Men Y Men, created in 2009 to give the ‘boys’ of the company something to do in a run of the distinctly distaff-heavy Giselle. A piece for nine men divided into two, the first is the less successful – using eight of the cast in four couples, Eagling explores partnering of men by men with aplomb to some souped-up Rachmaninoff. In the second section, things look up for the now nine bare-chested blokes in black tights, as they walk slowly from right to left, individuals breaking off to ‘riff’ balletically; thus Yat-Sen Chang jumps and twists his way through his solo, while Vadim Muntagirov leaps aristocratically and Esteban Berlanga uses his expressive back. The piece builds to an exciting crescendo of masculine movement and is certainly worth viewing. 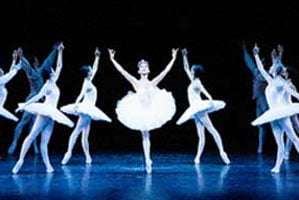 Closing the evening is a superb revival of Serge Lifar’s best work Suite en blanc, his essay in neo-classicism, ineffably chic and a blueprint for ballet as he saw it. Created in 1943, it was designed to show off the strength and style of the Paris Opéra, and remains a cornerstone of that company’s repertoire to this day. It has been staged by Maina Gielgud, who learnt the Cigarette solo (the only indicator that this plotless work is drawn from Edouard Lalo’s Namouna), from Lifar himself and danced many roles in the work over her years as a dancer, both corps de ballet and then principal. She has succeeded in capturing the essential chic and the ENB dancers who, for reasons of economy often have to perform one stretches of the narrative classics, seize this opportunity to ‘dance’ with both eagerness and dedication. It is a French Etudes, set to display the company’s strengths, and ENB field two casts – first night offered manifold delights from an engaging pas de trios to several delightful solos.

Lalo’s music was astutely chosen by Lifar who nipped and tucked here and there to produce the effect he desired – the curtain opens on the entire ensemble placed artistically around the stage which includes a raised platform at the rear connected to stage level by two staircases. Costumes are the simplest: white for the women and all white for male soloists and white shirt and black tights for the male demi-soloists. Lifar arranges his corps de ballet with real élan, often connecting two sections by the passage of corps across the stage – solos are often in counterpoint to complementary corps movement and the whole creation emerges as a wondrous synthesis of movement and platique. Lifar makes great technical demands on the dancers, who must execute these demanding steps with airy insouciance. I was particularly taken with Elena Glurdjidize’s stylish Cigarette, clearly enjoying the role, Crystal Costa in a bouncy, sparkling pas de cinq with four soloists who must entrechat seemingly forever and Shiori Kase in a finely judged Serenade. Erina Takahashi impressed also in Flute, notching up literally dozens of fouettés if you add those she tossed off in the Black Swan pas de deux.

Gavin Sutherland led an orchestra clearly relishing the music they had to play – a change from the endless runs of the classics they usually have to accompany; they seemed particularly happy in the Lalo and contributed to the triumph of the whole revival – this is a major work of neo-classicism (along with Ashton’s Scènes de ballet to which it is most germane) which reminds us that there was and is life beyond Balanchine. It represents a major restoration to the company’s repertoire – the first night was the work’s 132nd by ENB yet it has been absent from their performing schedule for 35 years. See Suite en blanc, see ENB dance it and see more and better choreography than in many a more modern three-act work!