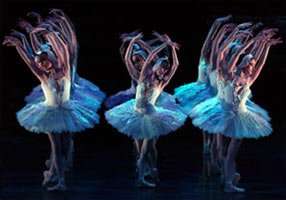 Tchaikovsky’s first and most enduringly celebrated ballet, Swan Lake, like many a great work of art, was not an immediately popular success. Its genesis came from a family entertainment in which the composer even devised the dance steps. However, seven years later in 1877, when the completed ballet was premiered by the Bolshoi it was a different kettle of swans. Its initial relative failure turned Tchaikovsky against ballet and he never saw the complete Swan Lake again in his lifetime, although he did enjoy the Act Two Lakeside scene and indeed it was performed in a concert tribute to the composer after his death. However, choreographers Marius Petipa and Lev Ivanov’s production of Swan Lake was based on this performance and it finally put the work on the international map. Over one hundred years later, Swan Lake remains the most performed ballet in the repertoire. 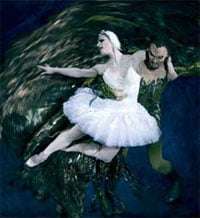 London first saw Swan Lake at the Hippodrome, in 1910, reduced to two acts and lasting just an hour. Diaghilev’s production played the Royal Opera House in 1911 and influenced many British productions thereafter. The Lakeside scene formed the basis of English National Ballet’s Act Two, which Alicia Markova and Anton Dolin danced in 1949 at the Gaumont State in Kilburn. ENB first staged the complete four-act ballet in Verona in 1964. The current production, the company’s ninth, was mounted for the Royal Albert Hall by Derek Deane who has adapted it for the proscenium arch staging at the London Coliseum.

It is a sumptuous production, traditional in appearance and certainly the next best thing to having the original Russian version. Perhaps this is the essence of the work’s success. It is a Romantic throwback to a bygone age, a magical tale of the power of love to overcome all possible tragedies. It concerns the love of Prince Siegfried for the beautiful Princess Odette who has been captured by 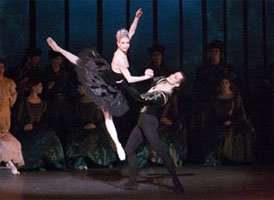 Rothbart, an evil sorcerer who is half man and half bird, and who has turned her into a swan. When the prince goes hunting he discovers the beautiful white swan and falls in love. At the prince’s birthday party he is presented with a choice of possible brides. Rothbart arrives with his daughter Odile, disguised as Odette. Siegfried declares his love for Odile and Rothbart reveals that he has betrayed Odette. When the couple are finally reunited, their love kills the spirit of the evil Rothbart and, although they jump to their deaths in the lake , they are still united in love.

It is the basic good versus bad, love versus hate motif that has kept Swan Lake in the repertoire. English National Ballet gives of its best in Peter Farmer’s evocative sets and of course accompanied by Tchaikovsky’s beautiful music. There surely cannot be a better ballet score than this, with one lushly Romantic melody following another.

Erina Takahashi makes a lovely Odette/Odile. She looks fragile and delicate but is an immensely powerful dancer. Her partner, Cesar Morales as Siegfried, is a perfect match. Without seeming to exert themselves they produce some beautifully intricate dancing together. Effortless lifts and graceful footwork embellish this production with true class. They are simply a joy to behold. However, the rest of the company are no slouches with some lovely corps work. The Act One ‘pas de quatre’ is a delight as are the various dances of all nations in Act Three. Tamarin Stott is supremely regal as The Queen, while the swooping antics of the villainous Rothbart are neatly captured by Fabian Reimair. However, Michael Coleman’s Tutor ought to be less of the big buffoon, as he really needs to be ‘under’ rather than ‘over’ the top.

Gerry Cornelius’s musicians produce an excellent, firm sound and Tchaikovsky’s music sounds so fresh and unmannered as if it had been written yesterday. This one should run and run.