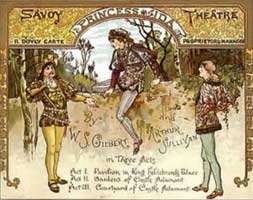 Since its opening season in 1884, when it received 246 performances, “Princess Ida” has been performed only infrequently. So it was with great delight to be able to see a production of this operetta. The New York Gilbert & Sullivan Players is in its 34th season, calling New York City Center home for seven of those seasons. Judging by the performance I saw of “Princess Ida”, the company’s continuing longevity is assured.

Of all the Gilbert & Sullivan operettas, “Princess Ida” is the only one in three acts and with dialogue wholly in blank verse. Much of that dialogue comes from Gilbert’s earlier play, “The Princess” (1870), which was itself based on Tennyson’s lengthy 1847 poem of the same name. “Princess Ida” was billed as “A Respectful Operatic Per-Version of Tennyson’s ‘Princess’”. 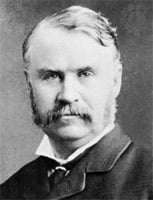 The operetta pokes fun at Victorian England’s concern with women’s education. Princess Ida has forsaken men and established a women’s university at Castle Adamant, one of her father King Gama’s country estates, where the students learn that “man is nature’s sole mistake”. Prince Hilarion, betrothed to Princess Ida when he was two and she was one, wants to marry her (he is now 22).

The operetta revolves around making the marriage happen. This includes Hilarion and his two companions, Cyril and Florian, surreptitiously entering Adamant where they disguise themselves as women after conveniently finding three academic gowns lying about. Lady Blanche, vebose and pompous, hands out punishments to the students for such offences’ as bringing chessmen to the university and for drawing a double-perambulator. She also wants to be the director of the university.

Lady Psyche, Florian’s sister, and Melissa, Lady Blanche’s daughter, discover the three men’s subterfuge . Eventually, Princess Ida discovers the deception too. After Hilarion’s father, King Hildebrand, arrives with his soldiers, Hilarion and his companions battle Gama’s three bumbling sons and defeat them. Princess Ida decides to marry the Prince, especially since he had saved her life after she fell into the stream surrounding Adamant during the hubbub of Hildebrand’s arrival.

The comedic force in this production was evident from the moment the curtain rose following a brief orchestral introduction. The pavilion in King Hildebrand’s palace was full of choral members comically singing and moving about in confusion, anticipating the arrival of King Gama and Princess Ida; other memorable moments included Lady Blanche’s singing ‘Come Mighty Must’ in a stentorian voice full of bluster and warning. In Act Three, the students emerged dressed as pseudo-Valkyries carrying double-bladed war-axes. Quite silly, but it brought the house down. Melissa’s fawning over Cyril and his obvious delight was also funny. 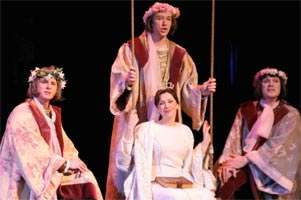 The singing was even throughout, but the top singer was baritone William Whitefield. He conveyed his lines meaningfully and convincingly, really bringing Florian to life. I am not sure why the understudy for Patrick Hogan did not perform, as it was announced that Hogan was a bit under the weather. Nevertheless, he did have enough energy to act forcefully and to deliver his dialogue well. Richard Slade sang Cyril’s lines from the orchestra pit and did an admirable job, while Stephen Quint sang King Gama’s patter songs with both intensity and humor and Keith Jurosko’s lyrical baritone was a joy to listen to. David Wannen, David Auxier and Louis Dall’Ava as Gama’s sons combined their voices with exaggerated body movements to great slapstick effect.

Kimilee Bryant was a plausible Princess Ida, singing her first aria, ‘Minerva! Oh, Hear Me’, with clarity and dignity. Her lovely lyric soprano got stronger as the night proceeded; the Act Three aria ‘I Built Upon a Rock’ is as close to a grand-opera aria as there is in the entire Savoy Operas repertory (the Savoy Theatre being where most of Gilbert & Sullivan’s operettas were performed), and Bryant sang it with feeling and depth. Dianna Dollman was also impressive, her singing and acting ensuring rapt attention. Shanna Farr sang with grace and style, especially evident in her Act Two ‘Towards The Empyrean Heights’, while Melissa Attebury’s talents were highlighted in her Act Three solo with chorus, ‘Death To The Invader’. The chorus was also kept busy.

The costumes were very colorful, while the lighting was effective, with highlights and shadows when necessary. The scenery was perhaps a bit too simple, but nevertheless left nothing to the imagination. The Pavilion in King Hildebrand’s Palace (Act One), the Gardens of Adamant (Act Two), and the Courtyard of Adamant (Act Three) were not pretentious; the sets were functional and did not interfere with the singing and acting.

The stage-direction was not overblown, although the production could have done without the tap-dancing by the soldiers. The choreography was however mostly effective. Albert Bergeret’s conducting was precise and insightful, the orchestra playing with both involvement and subtlety.