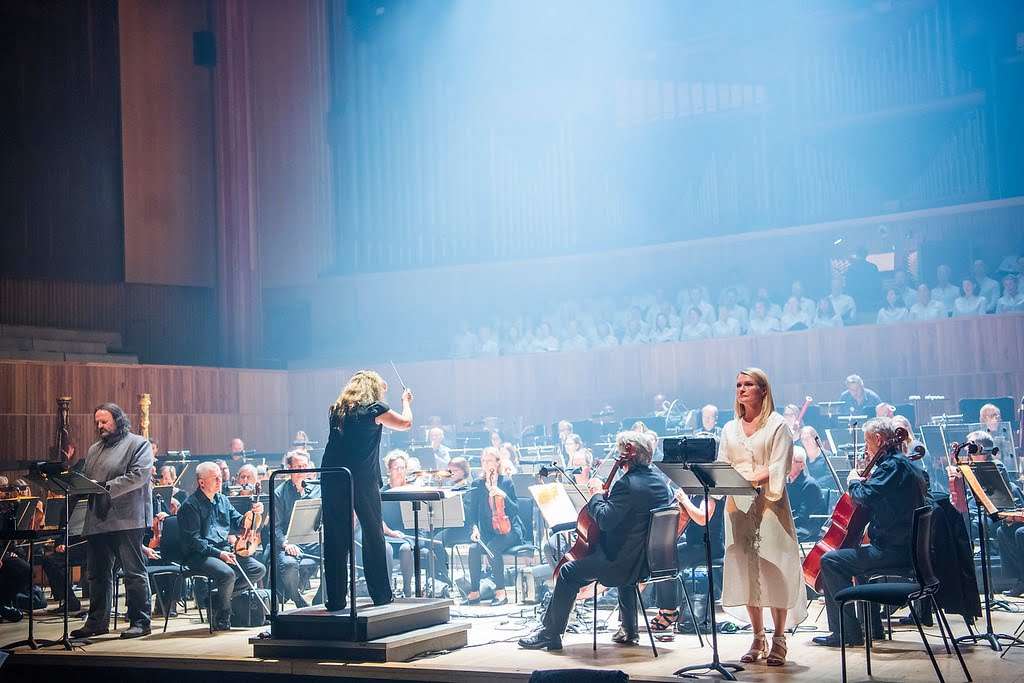 For those who argue artistic concepts dilute rather than intensify music’s spiritual power, this innovative and light-filled Dream of Gerontius neither weakened nor significantly enhanced Elgar’s inherently dramatic music. English National Opera presented, in simple terms, a Gerontius with lights.

At the forefront of this concept is Lucy Carter whose idea was “to use light to create an additional layer of emotion” as well as give the audience a “visceral visual experience”. Her design – a triangle within a triangular frame suspended above the performers – was effective enough, but over time one could anticipate changes, and the momentary appearance of God – blinding in its luminescence – was predictable.

As a strategy to attract a new audience all very well, but since the auditorium was mostly in darkness (and the possibility of seeing printed words denied us) surtitles would have helped make some sense of the lighting effects especially when diction was unclear – as in the ‘Demon’s Chorus’. That said, Carter’s intention to create abstract energies “suggestive of otherworldly and ethereal worlds” worked well here, and the “beasts of prey” as Cardinal Newman (the author of Gerontius) puts it were bathed in waves of red, to sinister effect. 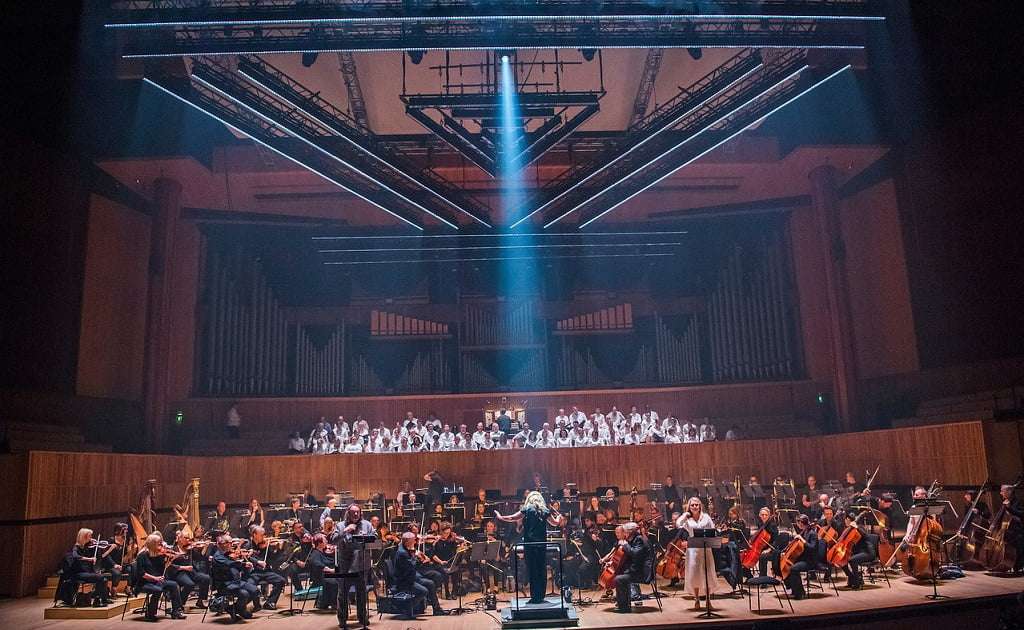 Billed as a “concert staging”, this second performance under Simone Young gave more than a hint of Elgar’s operatic ambitions in a work he never even considered an oratorio – “there is yet no word sufficient to describe it.” Young fused together in a seamless span its dialogues and leitmotifs and, with generally sweeping tempos, emphasised drama over reflection. The Prelude conveyed the sheer polish of the ENO Orchestra, which, save for the conductor’s spotlight, began in complete darkness. Once a shadowy light emerged, Elgar’s marking of Lento mistico was never better suggested. There was intimacy, wonder and excitement here, if with one unwarranted bass drum trilling across a bar line (figure 10 in my score) which should otherwise be a dramatic pause – but thrilling in effect.

Gwyn Hughes Jones was an impressive, ardent and very human Gerontius – able to persuade emotionally with a voice that, despite occasionally swooping, was affirmative. ‘Sanctus fortis’ glowed with conviction and the hushed tones opening Part Two were strikingly effective. Matthew Rose, an imposing Priest, possesses a voice of extraordinary power and his ‘Proficisere’ had a resonance and authority that commanded attention. Later, as the Angel of the Agony, his pleas to the Almighty to deliver the soul of Gerontius to “that glorious home where they shall ever gaze on Thee” were compelling and heart-wrenching in their sincerity. As the Angel, the dark-hued tones of Patricia Bardon brought comparison with Janet Baker, but lacked her expressive intensity. Secure in pitch and compassionate in mood, her legato was wholly convincing for ‘Softly and gently’, even if the colouring was too monochrome. It was a pity that Carter, wearing her concept, design and staging hat, ignored the opportunity for the Angel and the Soul of Gerontius to face one another in their only passage of dialogue.

Overall, it was an intriguing enterprise in which the combined choruses (about seventy singers) made the most of their collective sound, magnificently focused and rousing most notably in a fervent ‘Praise to the Holiest’. Gerontius’s journey into the afterlife was a thing of wonder, and during the final moments we were plunged back into darkness – and how comfortable that was!