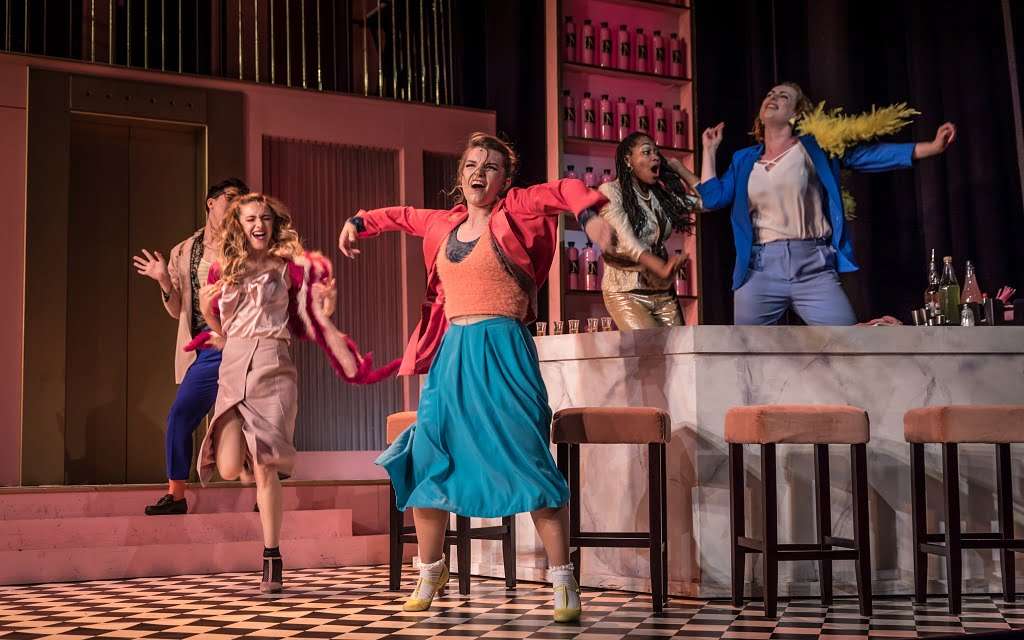 Love’s Labour’s Lost is one of William Shakespeare’s lesser-known comedies. It comes with a lot of word-play (some of it in Latin) which might explain its lowly status, but I can testify as to how well it works in British Sign Language and now as a musical, originally commissioned by the Shakespeare in the Park season at New York’s Central Park Delacorte Theater in 2013. All credit (and huge thanks) to the Royal Academy’s Musical Theatre department for picking it up for what surely must be its UK première and for director Bruce Guthrie, his team and the ridiculously talented final-year students for filling the Hackney Empire with such a riot of colour and wit, let alone running the gamut of emotions in such an affecting way.

It’s clear that composer Michael Friedman and adapter Alex Timbers adore the play – indeed, their introduction to the original production reprinted in the programme specifies this – and even though they have hacked half of the original away to achieve a running time of just over ninety minutes, they repay their feelings for Shakespeare in a sparkling and witty adaptation that transposes the action to an American college, with a posh hotel alongside. From Loren Elstein’s imposing sun-drenched design, on three levels (with not one lift, but two), I immediately felt we were in Florida and that the beach couldn’t be far away. 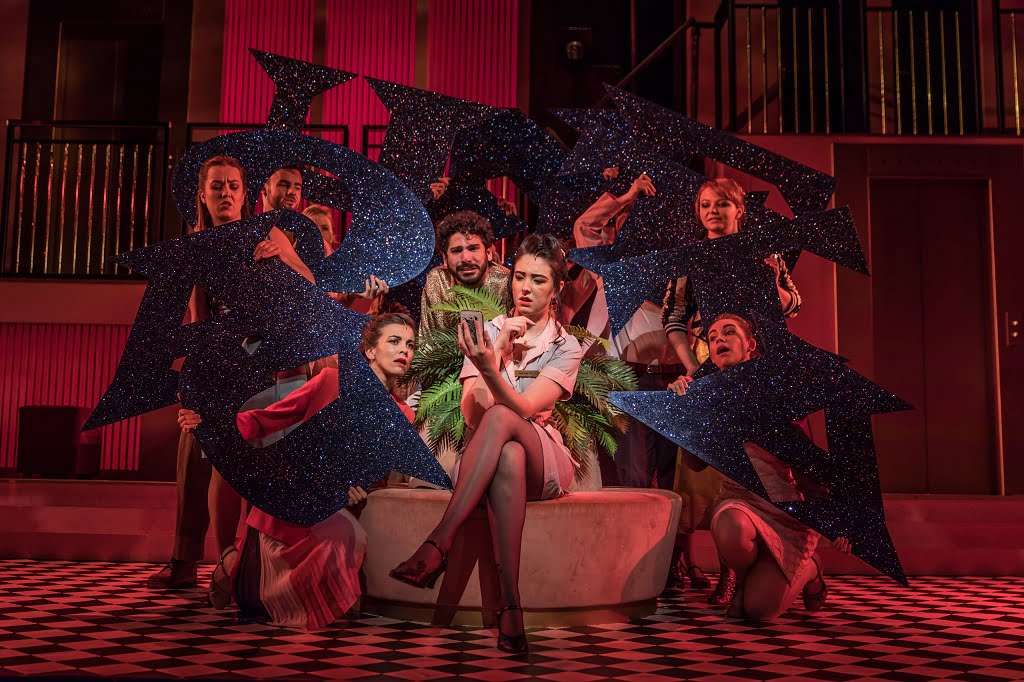 Our quartet of idealistic college lads coming together to study for three years are an effortless transformation from Shakespeare’s original King of Navarre and his lords. The French Princess and her cohorts as a sassy American gaggle, with factotum Boyet along for the ride, arrive just after the boys have foresworn the sight of women for three years. Throw in Spanish Don Armado who has an eye for waitress Jaquenetta and an all-singing/all-dancing ensemble and you have the recipe for a surprisingly modern musical, suffused with the age-old conundrum of love.

Friedman’s songs – sometimes quoting Shakespeare, often not – alternate with Timbers’s expertly filleted scenes and the wonder is how much of the genuine article seems to remain, in spirit if not by exact quotation. Fourteen of the characters are double-cast (A and Z) with those playing named characters becoming the ensemble next time (save for Benjamin Froehlich’s Navarre, Johan Munir’s Don Armado and Magdalena Placek-Boryn’s walk-on Mercadé).

The songs range from boy- and girl-band pop-songs via a hilarious nod to Minimalism (for the rigours of academic study) and 1980s’ electronic à la Kraftwerk, when the lads disguise themselves to entertain the young ladies, not as Shakespeare’s Russians, but as an East German performing-arts group, with distinctive body-popping moves. And the show culminates in echt-Shakespeare: a beautiful setting of the song that closes the play, ‘The Owl and the Cuckoo’, fashioning a subdued close that befits the climactic hiatus when merriment is punctured by the news of the death of the King of France, and the girls send their men away for a year (a ‘sequel’ called Love’s Labour’s Won is unfortunately lost – although perhaps Friedman and Timbers could fill the gap). 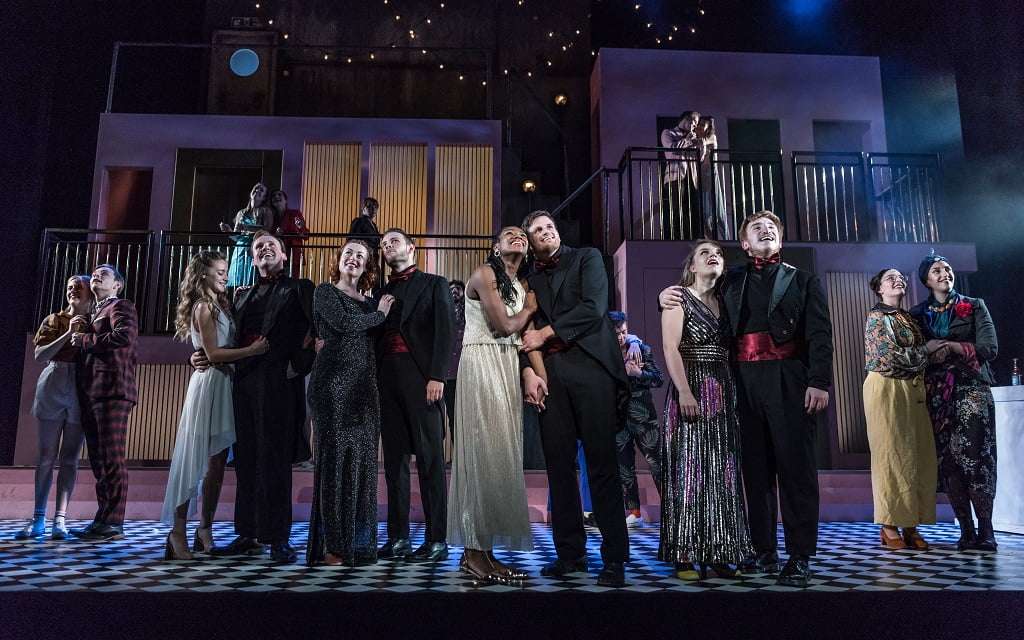 Steve Kirkham’s choreography takes its cue from the variety of music, adopting a myriad of styles, including a 42nd Street-like number as Peter Noden’s Longaville reveals sequined shorts to tap out his love for Katharine. That same scene (as Berowne overhears his fellow-scholars have fallen in love, only to be revealed when Jaquenetta gives him back a poem he’d wanted delivered to his Rosaline) nicely displays Zheng Xi Yong’s fine falsetto. Jessica Aubrey’s blonde-bombshell Princess and Merryl Ansah’s poised Rosaline, albeit with a mischievous glint in her eye, lead the French visitors’ confident swagger, while Laura Bird’s more lowly Jaquenetta makes her mark in one of the great songs from the show, ‘Love’s a Gun’. She is also the titular subject of Don Armardo’s big number, in which strutting Johan Munir is accompanied by the ensemble members each carrying glittery letters with which to spell out his lover’s name.

There’s social commentary too with the ensemble of staff knowing their place in ‘Rich People’, while the erudite pair of bespectacled academicians, Beth Clarence’s Holofernes and Muirgen O’Mahony’s Nathaniel, don’t take themselves too seriously as they ditch Shakespeare’s idea for a courtly entertainment based on the Nine Worthies and opt for a ‘Tuba Song.’ While the Royal Academy of Music’s resources can’t stretch to a marching band to make most sense of this big number (as the New York premiere had done), Kirkham’s choreography admirably fills the stage.

Last words should go to Luke Ward-Walton’s likeable Berowne who is first to rip up Shakespeare in the opening ‘Young Men’ (“want to have sex”) and then turns the very title of the piece to the exhortation “not to waste the labour of love.” This wonderful production is indeed a labour of love from all concerned: a revival soon please?