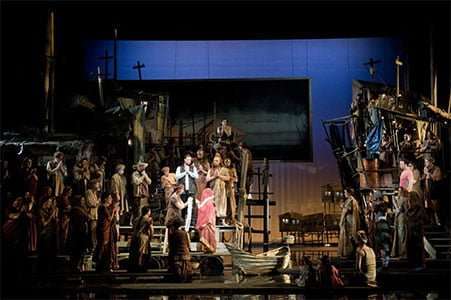 Penny Woolcock has returned to the Coliseum to update her 2010 production of Bizet’s The Pearl Fishers, not only for ENO but also now for a co-production with the Metropolitan Opera in New York. Her work is an outstanding feature of this first London revival. The opening sequences in which we see a representation of an underwater scene, with divers looking for pearls, is remarkable, so much so that one wished it had lasted for longer. Hardly less visually compelling are the sets for the first two Acts, particularly an extraordinarily realistic representation of the motion of the sea, with a boat, and men diving beneath the waves.

There was some doubt at first as to the period in time represented, but the appearance of characters in shirt and tie, and the presence of an outboard motor on the boat that brings Leïla to the village firmly dated it in the modern era, as did the set for Act Three, which apparently represents the community-leader Zurga’s office. The archaic dialogue, no doubt made more stilted in English translation, seemed odd under such circumstances, but such is the common problem of ‘updated’ productions: I wish this one had been made more timeless. But the choreography and high quality of the acting added to a visual experience that tended to overshadow the music.

That said, the young French conductor Jean-Luc Tingaud obtained sensitive and excellent playing from the ENO Orchestra. His direction was completely sure-footed and dramatically sound, and singer-friendly. The choral singing was also outstanding, full-bodied and enthusiastic.

Of the soloists, Sophie Bevan’s characterisation of Leïla was vivid, and in the lower and middle registers she produced a lovely tone quality. But in the top range her voice was unsteady in production, and her sound became squally. In the comparatively minor role of Nourabad, Barnaby Rea fulfilled all that was needed, but in different ways the two main male protagonists, Zurga and Nadir, were unsatisfactory. As Zurga, George von Bergen’s voice production sounded effortful, and vibrato-laden to the extent that one was not always sure of the pitch of the notes. In the role of Nadir, John Tessier’s rather thin, reedy tones were unattractive and not suited to a dramatic role.

Overall, though, it is an enjoyable evening, despite the rather silly plot and starchy text, for Bizet’s music is beautifully crafted at all times and full of heart-warming melodic invention. It is a remarkably mature opera for a 24-year-old.