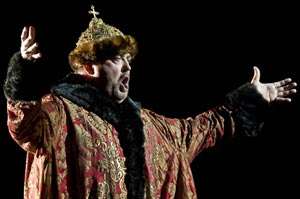 When Mussorgsky completed “Boris Godunov” (based on Pushkin’s tragedy) in 1869 it was rejected by the Imperial Theatre Committee, which was unhappy with Mussorgsky’s extensive cuts: he had cut the 23 scenes of Pushkin’s play’s to just five by simply eliminating any scene without Boris. The Committee was also unhappy at the elimination of Pushkin’s female protagonist (Mussorgsky’s commission was to write an opera with a prominent female role!). Mussorgsky restored her in his 1872 revision, which was approved and performed in his lifetime. It may be fashionable these days to stage ‘authentic’ ideas simply for the sake of it, but this opera is different due to its ‘outside’ rejection.Differences between the two versions include the Original’s Terem (Kremlin) Scene and the drama at the Cathedral of Vasiliy the Blessed. The Revised Version is longer, richer in musical and theatrical variety, and presents Boris in a more sympathetic and tragic light in the Terem Scene. The main changes are that the 1872 version has lost one scene (at St Basil’s) and gained three (the two Sandomir’s scenes and Kromï). 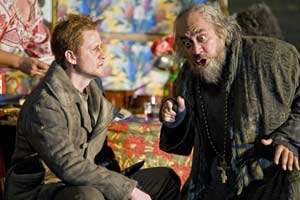 At English National Opera, “Boris Godunov” is presented as Mussorgsky originally conceived it. Hearing it unadulterated (that is pre-revision and before Rimsky-Korsakov made his version) provides a pulverising psychological experience and the lack of an interval makes Boris’s descent in to madness even starker.

With subdued lighting and thrifty sets this could have been a tiring evening. However, presenting the opera as a great psychological conflict yielded immense rewards – for this is a tragedy in which the eponymous Tsar’s mental state disintegrates gradually as he believes that the supposedly-dead (possibly murdered on Boris’s instructions) Tsarevich (Dmitri, son of Ivan the Terrible’s seventh marriage) is still alive and raising an army to reclaim the throne. In actuality, he is a Pretender, a fanatical monk, who wants to teach Boris Godunov a lesson; it is the weight of this fear that unnerves Boris. It is the more tragic because Boris has led his people with compassion, even helping a Simpleton to his feet in one scene. 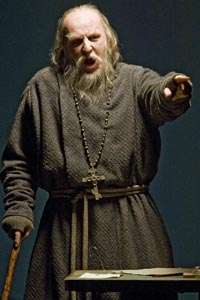 The set (pretty sparse and not turn-of-the-17th-century) is inclined and consists of three wooden walls surrounding the stage with openings in each side. The incline promotes the fragility of the characters’ situations most effectively. Adam Silverman’s lighting is inspired: concentrating and making raw Boris’s conflicting emotions. In particular, in what might be called Boris’s ‘mad scene’, where he sees the ghost of the dead Tsarevich, all the light was on his head and his eyes were aflame.

A disappointment was the conception of ‘near the Lithuanian border’ (scene 4) where the sense of being outdoors was wholly absent and the discourse between the travelling monks and the border guards was confined rather than having a sense of the ‘great outdoors’. What was paramount was presenting the characters in a convincing way and the production does this magnificently. When set against Mussorgsky’s stark orchestration this works well – having extravagant costumes and sets would only distract from the mind-games. 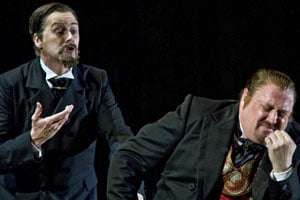 As Boris, Peter Rose gave a bravura performance, living palpably the character’s descent from messianic saviour to the deranged and mentally-defeated victim of his position. Whether or not he ordered the death of the Tsarevich is immaterial; when he becomes Tsar his intention is to rule with a broad church of advisers. Rose’s triumph came in the fifth tableaux in which Boris’s emotions conflict: loving father and troubled leader. His frantic calling-out to the dead child was chilling. In the final scene, Rose kept the gravitas of the Tsar in check whilst pleading for forgiveness until death. By the end, as a broken man, Rose’s portrayal was incredibly moving.

This is a production cast from strength. A stand-out was Brindley Sherratt (another bass) as the chronicler Pimen; dignity was given to the part, every word sung with clarity. His retelling of the story of the man cured of blindness at the tomb of the Tsarevich Dmitri was sung with supreme authority. The conniving Prince Shuisky is the lean tenor John Graham-Hall. His part in Boris’s downfall is even more pronounced in the Revision – his past inequities are detailed before his entrance and his account to Boris of the rise of the Pretender is described as “insolent” but in the Original as “in terror” – but was well brought out here.

Given his importance to the story it is surprising that Mussorgsky felt that the Pretender Dmitry, formerly the monk Grigory Otrepyev, was worth only a small part in the third and fourth scenes; the revision develops him and reveals his naked ambition in the Polish Scene that ends the 1872 version. With the little he was given it was fortunate that Gregory Turay could muster his presence to captivating effect (all aided by supporting lighting). His opening recollection of his “obsessive, accursed dream” matched well Sherratt’s discourse. Boris’s son, Fyodor (Anna Grevelius) was playfully captured and very much the doting boy, keen to show off his knowledge of the world. The opera is stuffed with these minor roles and each singer made them count.

A pleasure to top all of this emanated from the pit, from where Edward Gardner led a stunning account of this visceral and difficult music. He found his players malleable as well as in possession of stamina as he brought out the score’s seething anxiety and raw energy. This is a triumph for ENO.