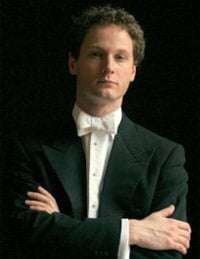 From the first notes of the Overture to “Ruslan and Ludmila”, this was going to be a fireball of a night, an invocation of lyrical Russia in the palatial splendour of St John’s, complete with its dripping gold chandeliers and gargantuan marble columns.

In Rachmaninov’s Third Piano Concerto, the Orion Symphony Orchestra, with Greek pianist Panos Karan, offered an exposé tempered by the hot-blooded impulse of younger players. Surfing together on waves of focus, the fantastic erratic nature of youthful musicianship took us in a headlock from behind. We waited transfixed and electric for the next in a scattering of moments when the soul did manage to break through and become bigger than its toolkit, a magical Alice-in-Wonderland

gianting of pianist to his diminutive toy piano, as Panos was swept up by the orchestra like a helium version of himself, the heart of his music soaring far above overflowing handfuls of notes and the clacking hammers on strings.

The orchestra then found itself dancing with the ogre, the twisted, tumultuous monster that is Tchaikovsky’s Fourth Symphony. There’s no doubt these musicians had every intention to play the hind-legs off this horse, and they did so with unrelenting rambunctiousness of spirit. I’d venture to suggest their approach in fact so boisterous that they somewhat obliterated the shifting subtleties of sorrow, anguish and deranged desperation in their enthusiastic efforts to meet the mark.

But this is a bright-eyed young orchestra with a quite remarkable joie de vivre, that in itself is an unlikely choice to tap the putrid depths of Tchaikovsky’s emotional health. Must we throw them so quickly into the toxic pit of pain and poison? Do you begin a legacy with chaos or with control?

Artistic director Toby Purser has certainly raised the bar for his initiative. This was an ambitious feat that brought a commendable realisation. I’ll hazard there’s no doubt in anyone’s mind that this orchestra produces a quality of sound comparable to any professional group, matched with an energetic vitality that could blow their competition out of the water. Further to that, they play with fullness of tone and an extraordinary instinct for internal balance and blend.

As for some pretty audacious programming, proportionate to what I’d guess was a thinly-stretched rehearsal period, I hope Purser’s chutzpah will propel him to great heights. His programming choices reveal a foresight that goes bravely beyond a superficial showcasing of the ensemble. Embedded in these decisions is a syllabus of sorts, a commitment to the ongoing development of these players and to the future of this operation. He’s taking these capable students on a necessary ghost train into new and exciting territories that reek of passion-plagued turmoil and hysterical caprice.

In the meantime, this remains a group with capacity for outstanding youthful gusto that will get everyone’s pacemaker going. I challenge anyone present to refute the snowballing adrenaline that spiralled this performance to its volatile, skyrocketing finale and the clamorous applause into which it so seamlessly segued.