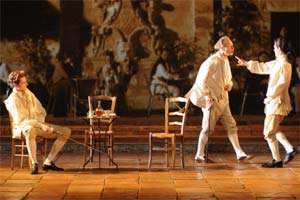 This is English National Opera’s third attempt in six years at finding its ‘house style’ for this most elusive of Mozart’s operas. Although Abbas Kiarostami’s version of “Cosi fan tutte”, brought to fruition by Elaine Tyler-Hall in the director’s enforced absence, has much to show that is beautiful, the whole does not quite come together despite its clearly poetic sensibility and its often very fine singing.

Kiarostami is a much esteemed film director, with a sensitive understanding of how to depict not merely narrative events but the unspoken emotions which underpin or counterpoint those events, so he would seem an ideal interpreter for this opera. However, his use of filmed backdrop works against him on the operatic stage for several reasons, considerable technical achievement though it is.

Two ‘sandstone’ pillars frame huge video projections, mainly of the Bay of Naples (or so I assume, since in certain lights it looked more like a piece of Southern Utah dipped in Lake Como) but also featuring a Mediterranean street-café and an orchestral scene complete with conductor. They are exquisitely filmed, the café providing the ambience of “a beaker full of the warm South” which is the only proper background for the first scene, and the bay with its approaching and departing ship mesmerising in its tranquillity. However, the length of back-projection needed to achieve the size required means that the depth of the stage available for the action is severely compromised and leaves little room for the singers. 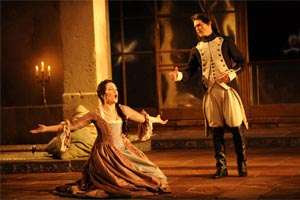 A fine, mostly young cast had been assembled, with the ‘veterans’ Steven Page and Susan Gritton providing reliable, musical singing as Alfonso and Fiordiligi, and a notable debut for Liam Bonner’s Guglielmo, who only needs a little more confidence in phrasing to make this a really fine interpretation. Thomas Glenn’s Ferrando displayed a cultivated tenor with some astringency in the timbre, but he seemed a little constricted by the production. Fiona Murphy’s Dorabella does not disappoint and will get better. Sophie Bevan, who only a few years ago was a student at the Royal College of Music, was a poised Despina, blessedly free of making this role irritating.

The minimal set and costumes, by Malika Chauveau, are 18th-century in style, neutral in palette and suggestive of paintings by Fragonard – they were wonderfully lit by Jean Kalman, whose artistry yet again seems so often to provide the emotional depth lacking elsewhere. That is the main problem – lovely backdrops, proficient if not always fluent orchestral playing under Stefan Klingele, and generally eloquent singing, but the parts did not make for a satisfying whole.

It’s true that ‘Così’ is often seen as a shallow and cynical piece, but a great production will reveal this to be a superficial viewpoint. On this occasion, looking at the cleverness of the ‘band’ scene, where a ‘virtual’ orchestra appears courtesy of video projection, meant you were gritting your teeth at the ordeal it presented for the conductor struggling to stay in synch with his pre-recorded doppelganger. Better to be reflecting on the feelings engendered by the immortal music of ‘E nel tuo, nel mio bicchiero’.