Donizetti
Lucia di Lammermoor – Opera in three Acts to a libretto by Salvadore Cammarano after Walter Scott’s novel The Bride of Lammermoor [sung in English, with English surtitles] 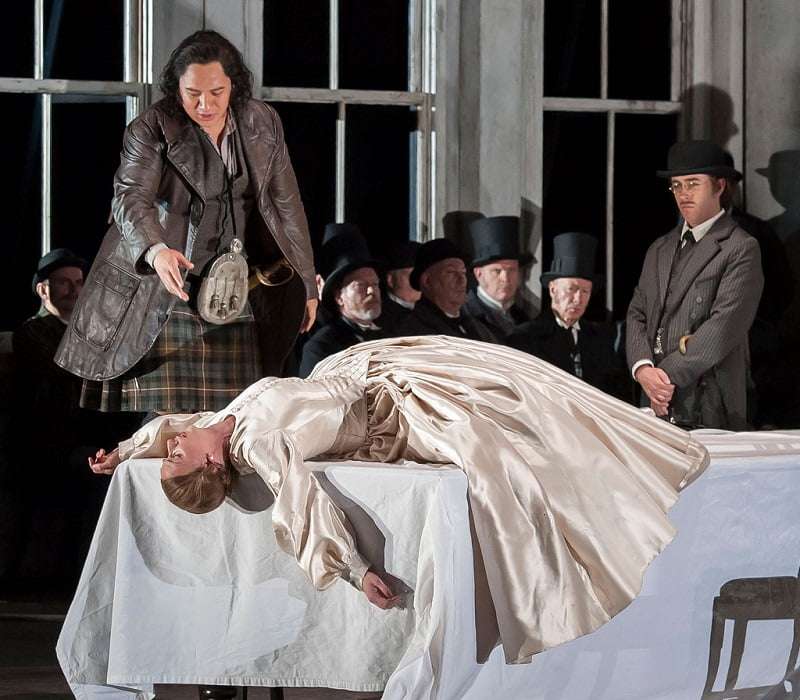 There is blood, there is thunder, there is incest, sacrifice, death and madness. David Alden’s production of Donizetti’s romantic shocker Lucia di Lammermoor returns to the Coliseum, trailing gothic clouds of darkness, after an absence of eight years. If you experienced it in 2008 or 2010, Alden’s staging scrubs up very well in this revival of innocent Lucia, forced into marriage with Arturo, whom she hardly knows let alone loves, by her damaged, violent brother Enrico to save the family name and fortune. But Lucia and the mysterious and noble Edgardo have sworn undying love for each other. Undying? No chance.

Alden and his designers have updated Walter Scott’s tragic novel (based on fact) to a solid, bourgeois Victorian period, dressed in black bonnets, top hats and crinolines, set within the walls of a grand but severely distressed interior, all of it starkly lit. Apart from the dingy set, white is reserved for Lucia’s and her hapless husband Arturo’s wedding clothes. The only real colour is red. You could be forgiven for thinking it all a Halloween show with a difference.

Alden, with unsparing accuracy, emphasises the repression of a society wedded to its past and throttled by pride and hatred, so Lucia’s famous, even notorious, mad scene after she’s killed her freshly-married Arturo, doesn’t seem that surprising given that the rest of the cast is trapped in the mania, especially brother Enrico and thwarted lover Edgardo. Lester Lynch, in his ENO debut, plays Enrico on full throttle. He is ideal for Alden’s purposes, kinky and grotesque as he reveres the picture of his recently dead mother, then taking brotherly love to extremes with Lucia, whom he has tied to her bed with her skipping rope. Enrico’s majestic melancholy is a good fit for Lynch’s huge, full-toned singing. Edgardo, in a kilt to remind us the opera is set in Scotland, is sung by Eleazar Rodriguez, who delivers high-voltage passion sometimes at the expense of secure intonation, and sings the Act Three scena beautifully. Both male leads filter bel canto manners through megaphone verismo, with results closer to Verdi and Puccini than Donizetti, but it sounds just fine in Alden’s plan. 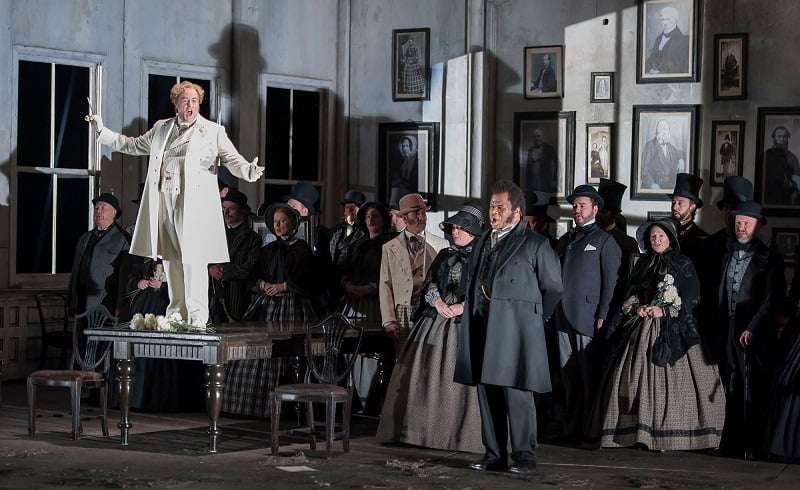 Sarah Tynan, singing Lucia for the first time, steers things back to Donizetti with her lovely, light soprano, shapely phrasing and some fine-spun coloratura. Tynan doesn’t have the queasy, waif-like allure that gave a pervy agenda to Anna Christy’s portrayal in the first two runs, but Tynan radiates Lucia as victim and sacrifice, the ultimate in damaged goods. In the edition of the score used here, Tynan sings the mad scene, without the usual cadenza, accompanied by Philip Alexander Marguerre on glass harmonica (the instrument Donizetti originally intended), and the combination of its strange purity and Tynan’s increasingly distracted performance is unforgettable.

As Arturo, Michael Colvin, effete in floor-length cream overcoat and sporting a long cigarette-holder, is a well-sung, neatly observed foil to Rodriguez’s Edgardo. Clive Bayley’s bass sinks to impressive depths as the hypocritical pastor Raimondo, prayer book in one pocket, hip-flask in the other – Alden reminds us here that Scott’s novel casts Enrico’s family as Protestant (boo!) and heroic, noble Edgardo as Catholic (hurrah!) – and if the substance in his voice comes and goes, his reading as a whole goes for the melodramatic jugular. Sarah Pring (like Bayley, she was also in the production’s first two runs) is amazing as Lucia’s increasingly loopy companion/duenna, Alisa extravagantly dressed in hugely hooped black, like something out of a Paula Rego painting. Elgan Llŷr Thomas is splendid as Enrico’s duplicitous servant Normanno – he was also a terrific Quint this summer in ENO’s superb Turn of the Screw – and is a tenor to follow.

The ENO Chorus was on great, confrontational form, and Stuart Stratford’s dramatically pressured conducting keeps the action surging ahead in an opera that never flags, and there is plenty of stylish, Italianate playing from the Orchestra. Really, what’s not to like?