Sibelius
Luonnotar, Op.70Vaughan Williams
Riders to the Sea – Opera in one act to a text adapted from J. M. Synge 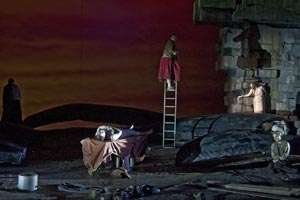 The untimely death of Richard Hickox, who was to have conducted this new production, made for an emotional premiere, not least as Vaughan Williams’s “Riders to the Sea” is concerned with death and premonitions of it. This must have made it exceptionally hard on all those taking part. Had the programme just been ‘Riders’ it would perhaps have been more so.

However, the idea of prefacing the Vaughan Williams with a stage presentation of Sibelius’s “Luonnotar” with its affirmative ideas about creation and birth was both inspired and inspiring. The idea that from birth there must always be death was very potent. Many of these composers’ works are evocative of untamed nature, landscape and seascape and are quite complementary. That the composers admired each other’s works and had a brief correspondence adds weight to their linkage.

This was Fiona Shaw’s first assignment at operatic direction and it had a sure touch and course. The settings of Dorothy Cross and Tom Pye were stark and very atmospheric and the ever-changing video projections of the sea and sky emphasised the unpredictability of nature. 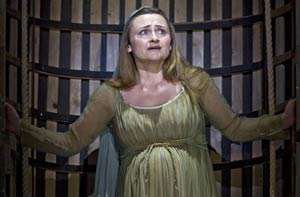 Susan Gritton sung “Luonnotar” in the original Finnish. She sang as ethereally as one could have wished for and the top of her voice had both creaminess and power. She was seen lying in a boat as if from above, with the background projections conjuring images of air, water and water-lilies initially, and then as the airy spirit descends to the water the images became those of the depths. As the character of Luonnotar becomes impregnated she removed her long-trained green shift to reveal her pregnant abdomen – a strong visual image. It was curious how this short piece and narration could be made so theatrically compelling, and this was surely helped by the evocative sounds emanating from the pit with Sibelius’s utterly identifiable string-writing having warmth and that ever-present tinge of unease.

This was carried through into the Vaughan Williams, as the boat that Luonnotar was in descended to floor level and became one of the many such vessels of the Irish village where “Riders to the Sea” is set – each boat representing one of Maurya’s lost sons. The opera starts with the presumed and later confirmed loss of Michael, denoted by an upturned boat and a body hanging in the air. 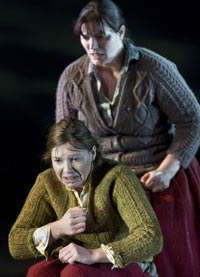 The plot, based on a play by J. M. Synge, is not an obviously operatic one. Maurya’s two daughters, Nora and Cathleen, try to hide from her the fact that Michael’s clothes have been found and that his death is therefore confirmed. The remaining son, Bartley, announces his intention to ride across the waterway to attend a local market despite the approaching bad weather. Maurya tries to prevent this by stating her dependence on him as (possibly) the only man left in the household, but the headstrong Bartley leaves angrily. The girls try to persuade their mother and give him her blessing, which she attempts to do, but instead she sees a vision that confirms his fate in the depths, too. The final scene sees the women each coming to terms with loss in their own ways.

The three ladies each gave very impressive performances. Patricia Bardon, with her velvety low mezzo that can assume myriad colours and tone, was a suitably emotional, fatalistic and resigned Maurya. Her wordless outpouring of grief was very touching. Kate Valentine and Claire Booth were excellent as the sisters, each capturing the differing natures of the two girls unerringly. All three managed to make their Irish accents convincing. Leigh Melrose made much of little as the angry Bartley. The off-stage voices were excellently judged, too.

Under Edward Gardner’s the Orchestra produced some fine playing and brought the atmospheric detail of Vaughan Williams’s score to vivid life. The plaintive oboe solos that both delineate and underpin the sense of mourning and impending tragedy were superb, and the strings seemed to relish the composer’s deliberately uncertain tonalities that generate much of the tension.

The production received a generous if understandably muted reception, but this brave and adventurous billing surely deserves more than a handful of performances.