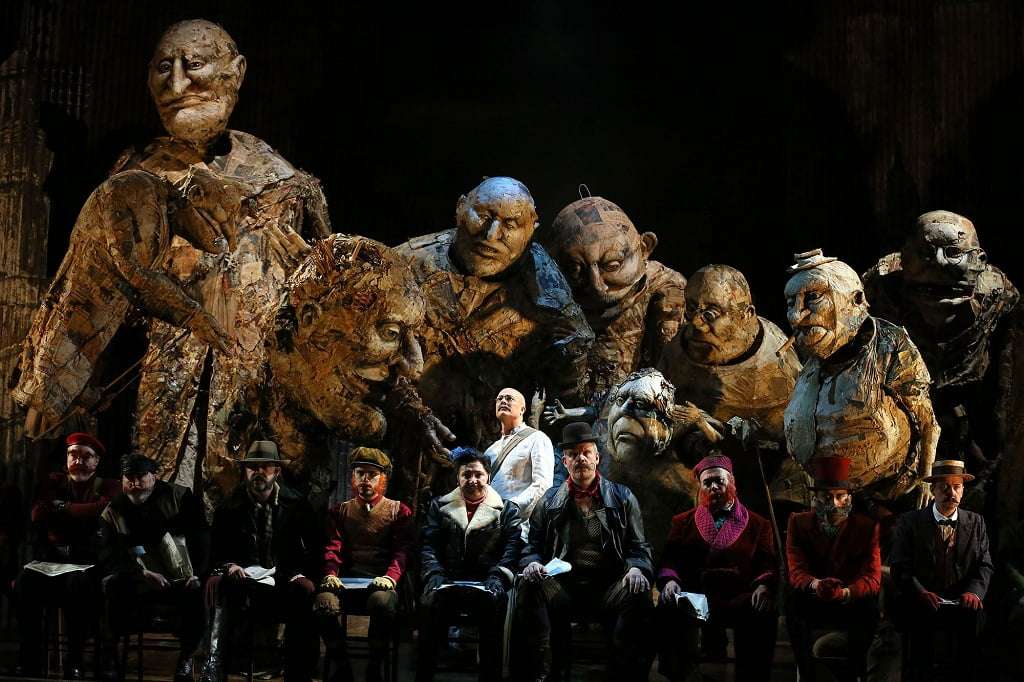 It was once said of Hubert Parry that, given enough time, he would set the entire Bible to music. Had he done so, one wonders whether and how he would have created a convincing score out of the sequence of discrete aphorisms which constitute the Book of Proverbs.The question similarly arises in respect of Phelim McDermott’s production of Philip Glass’s Satyagraha (opening in its third revival by English National Opera). It is sung in Sanskrit and eschews the use of surtitles, leaving the audience to ponder the equivalent mantras which are culled from the Hindu sacred text, the Bhagavad Gita, to form the core of this opera’s libretto and are periodically projected onto the set – the only words which a non-Sanskrit-comprehending audience will understand here.

If the staging succeeds as a piece of musical theatre, it is in harnessing to compelling effect the unfolding of different, non-linear strands of time in the work. The alignment of Glass’s music (each section built up like a passacaglia over an underlying harmonic sequence, over which faster figures shimmer in repetitive, shifting formations) and mime manifests not the outward drama of Gandhi’s life in South Africa, but rather the inner, obsessive musings upon the Hindu dogmas enunciated by the characters and chorus which must have reverberated within his mind over the seventeen years or so which are collapsed into the work’s three Acts. Despite the non-chronological series of events alluded to by superscriptions on the set in conjunction with the tableaux enacted symbolically by Skills Ensemble, the audience does not receive any clear dramatisation or interpretation of Gandhi’s psychological or personal development, nor any explanation of his or any of the characters’ motivations (there is a lot of standing around by them). Rather, the viewers’ senses are pounded into submission to the dictates of the incanted scriptural platitudes and the minutely-focussed, slow-motion choreography of the stage action which unfolds not even so much like a religious ritual as a trance-like illusion. 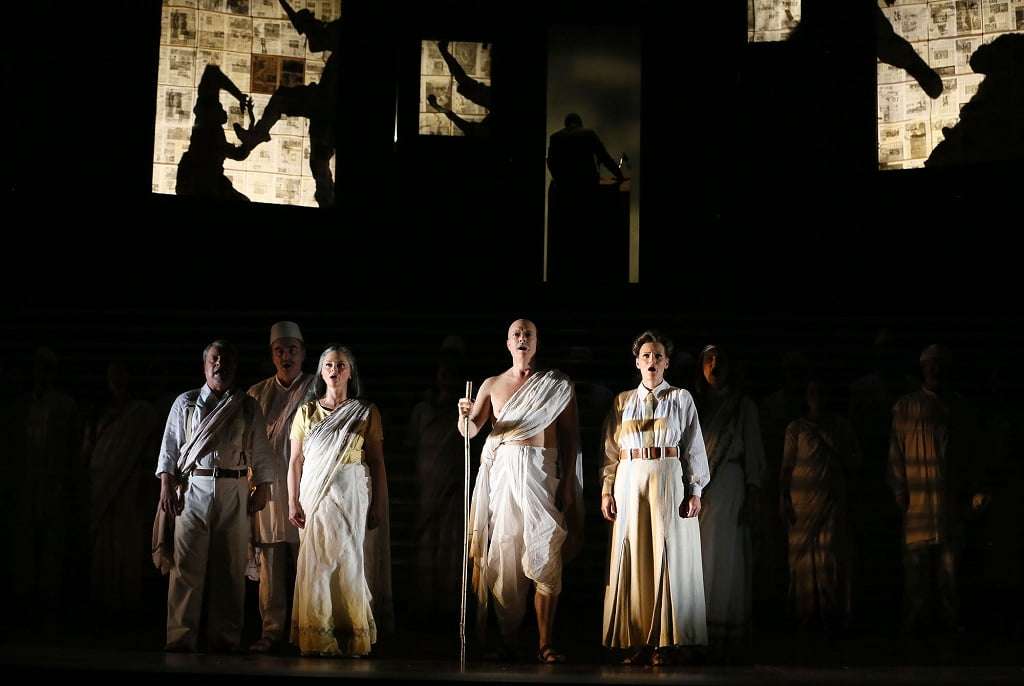 Toby Spence brings off the potent force of Gandhi’s non-violent personality patiently and skilfully (the principles of ‘Satyagraha’ embody something more active than its popular conception as mere passive resistance would imply) as crowds are variously attracted and repelled by him. At the same time Spence exhibits the character’s detachment from the everyday world (even in his appearance during the opening scene as a lawyer in Western dress), and rightly making Gandhi seem not so much an individual person with a will of his own, but a channel for spiritual enlightenment and guidance. In his performance during Act One it is as though Spence expresses the younger Gandhi’s hesitant oscillation between his two selves (as a lawyer, and as a transformed holy man) by alternating in tone between lyrical simplicity, and a more vibrato-laden depth. 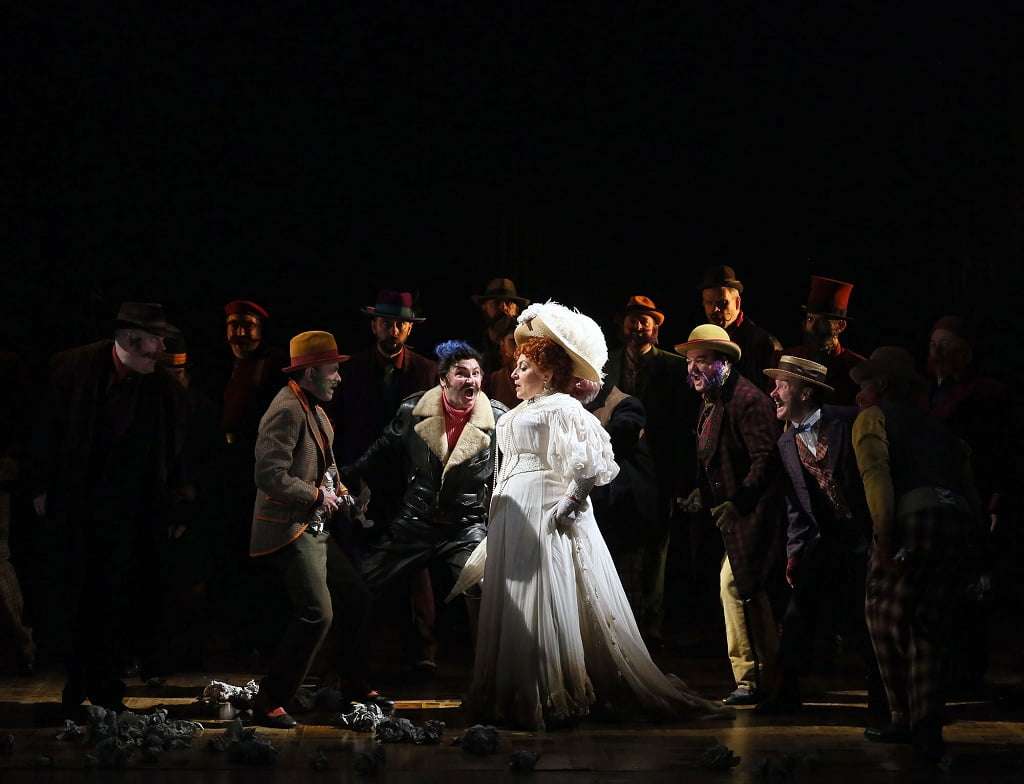 Although a historical figure, Spence’s Gandhi stands here in a continuum of time with other gurus or sages, representing past, present, future (in respect of Gandhi’s own biography at least) as the figures of Tolstoy, Rabindranath Tagore, and Martin Luther King each hover in the background during the respective three Acts. Taken by unspecified members of Skills Ensemble, they represent a similarly magnetic presence as Gandhi, although they remain silent.The rest of the cast generally exhibit, in musical terms, a similar studied anonymity with the direct declamation of their words, though Andri Björn Róbertsson necessarily makes a somewhat more forceful impression in his theophany as Lord Krishna, and Nicholas Folwell’s Kallenbach has a tendency to bellow.

The ENO Chorus is impressive in the concentration and ardour it expends; only in the passage for men in Act Two with repeated ‘ha ha’ syllables (seemingly scoffing at Gandhi, like a more aggressive version of the trilled effect of Purcell’s ‘Cold Genius’ from King Arthur) does the music’s motoric drive occasionally falter as the singers catch their breath.

Karen Kamensek leads the reduced Orchestra called for by Glass (lacking brass) in an unyielding, bracing account of the score. It is testament to the players’ unanimity of purpose that as certain instruments (particularly flutes, oboes, clarinets, or bassoons in various combinations) coincide in octaves in their melodic iterations they produce a sound as though issuing from an electronic source with pointillistic colour and regularity. Sustaining those repeated figures with such concentration and urgency is a notable achievement as it is that, as much as anything, which inculcates this production with dramatic direction and tension. Listeners who consider Glass’s instrumental music monotonous, frustrating, or inconsequential may find that, in the context of this dramaturgy, it takes on a new purpose and integrity.